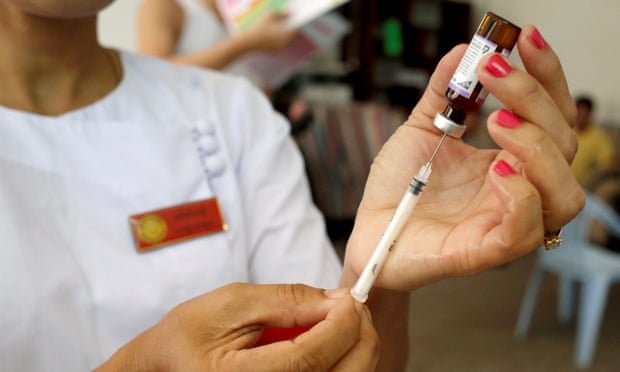 Most of those dying are small children, and thousands more suffer harm including pneumonia and brain damage. New scientific evidence shows survivors are at greater risk soon afterwards because their immune system is impaired.

Anti-vax misinformation spread through social media is contributing to a rise in cases in affluent countries such as the UK and US, while problems in health services play a big part elsewhere. In the Democratic Republic of the Congo, where not enough children have been immunised because of conflict and low-quality health services, more than 4,500 people have died from measles this year – more than the death toll from Ebola.

Samoa is in the grip of an island-wide outbreak that has killed 60 people after parents lost confidence in vaccination following the deaths of two children from a wrongly mixed vaccine last year. Anti-vax activists appear to have stoked the doubt; Robert F Kennedy Jr, a prominent anti-vaxxer, visited the island in June.

The estimates are from annual modelling carried out by the World Health Organization (WHO) and the US Centers for Disease Control. They are vastly higher than the numbers of cases that countries report. Vaccination rates have stagnated for almost a decade. The WHO says 95% coverage is necessary to prevent outbreaks, but globally 86% of children get the first dose and fewer than 70% the second dose.

Dr Tedros Adhanom Ghebreyesus, the WHO’s director general, said: “The fact that any child dies from a vaccine-preventable disease like measles is frankly an outrage and a collective failure to protect the world’s most vulnerable children. To save lives, we must ensure everyone can benefit from vaccines, which means investing in immunisation and quality healthcare as a right for all.”

Prof Heidi Larson, the director of the Vaccine Confidence Project at the London School of Hygiene and Tropical Medicine, said: “Despite an available, safe and effective measles vaccine, not enough people are being vaccinated to prevent this devastating loss of life. Some countries are scrambling to vaccinate in the face of serious outbreaks, far too late for many. Stressed systems due to multiple disease outbreaks, conflict, rumours and distrust contribute to the measles crisis.”

She cited Ebola in Liberia and DRC and plague in Madagascar, while she said Ukraine “has rumours and mistrust swirling alongside conflict and historic vaccine supply gaps”.

The WHO’s immunisation director, Dr Kate O’Brien, expressed concern about the direction in which the numbers were heading. “We are clearly backsliding in terms of progress on measles. It’s not just that we are not continuing to have progress in its control and direction towards elimination, we are now going backwards. It is very sobering. The size of these outbreaks is very large.”

She said the outbreaks were having a severe impact on the provision of other healthcare in countries where provision was already stretched, she said.

“Anti-vaccine messages are not new. But what is new is the tools with which and the opportunity for these messages even from a small fringe group of people to disseminate very widely and to portray themselves as if they are accurate pieces of information, which they are not.”

Social media companies are beginning to help by taking down blatant misinformation and directing people to reliable sources such as Public Health England, the WHO or the CDC in the US. O’Brien said healthcare workers needed to be well prepared to answer vaccine questions, and young people needed to be educated about science, illness, vaccines and credible sources.

“They will be the parents of the future and we really think that there’s a lot that could be done now to essentially immunise young people against misinformation,” she said.
#Vaccines  #vaccine