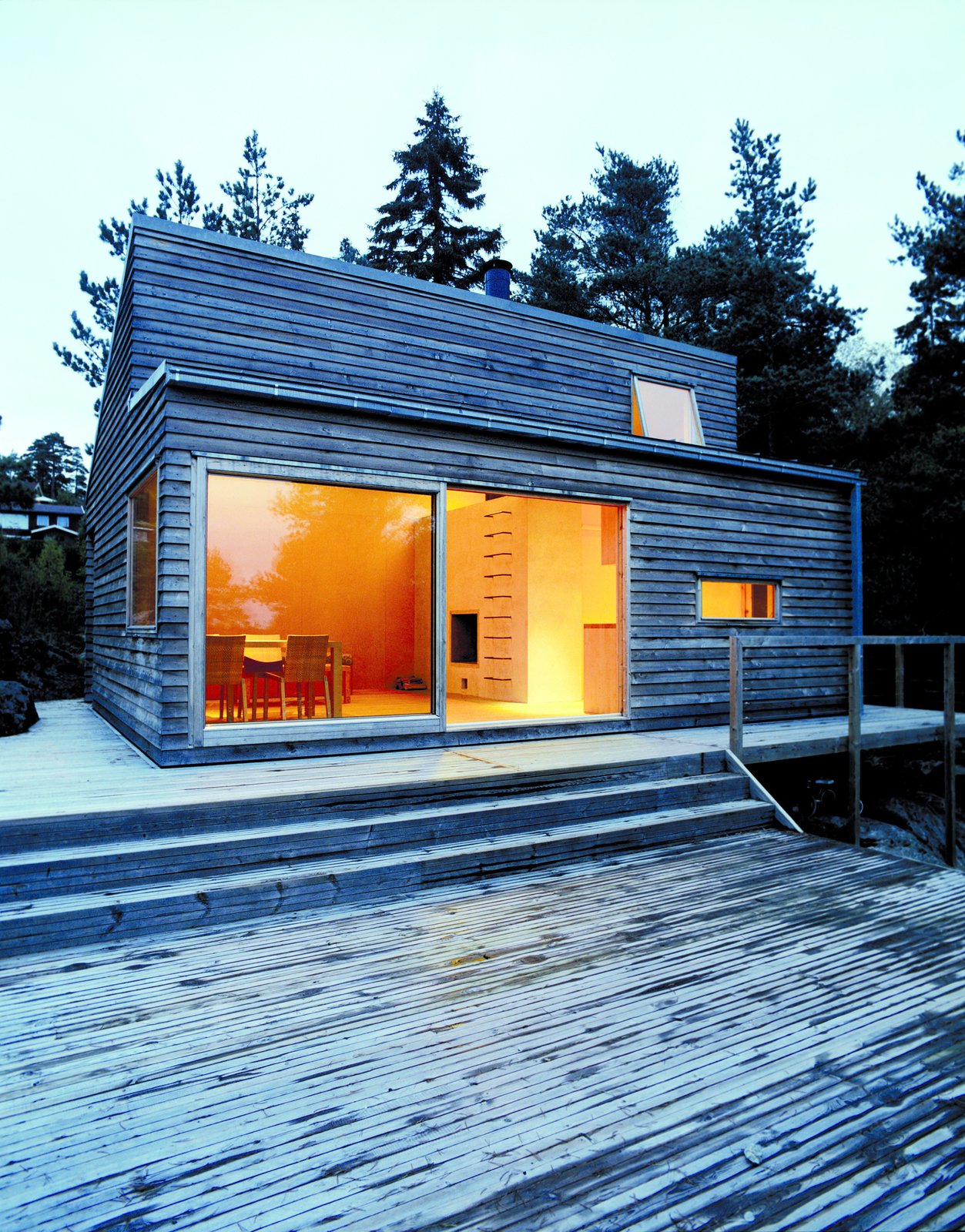 A Prefab Cabin in Norway

A small prefab cabin in Norway is offering an alternative view on the concept of luxury.

Large vacation homes have become almost the standard in this affluent Northern European country in later years, in contrast to the small and quite simple ones that were built by previous generations. The bigger, the better, seems to have been the mantra. But is that really true? When Oslo-based architect Marianne Borge was approached in 2004 by a client who wanted an actual cabin rather than a second home, she was instantly inspired by the challenge of working on a smaller scale. 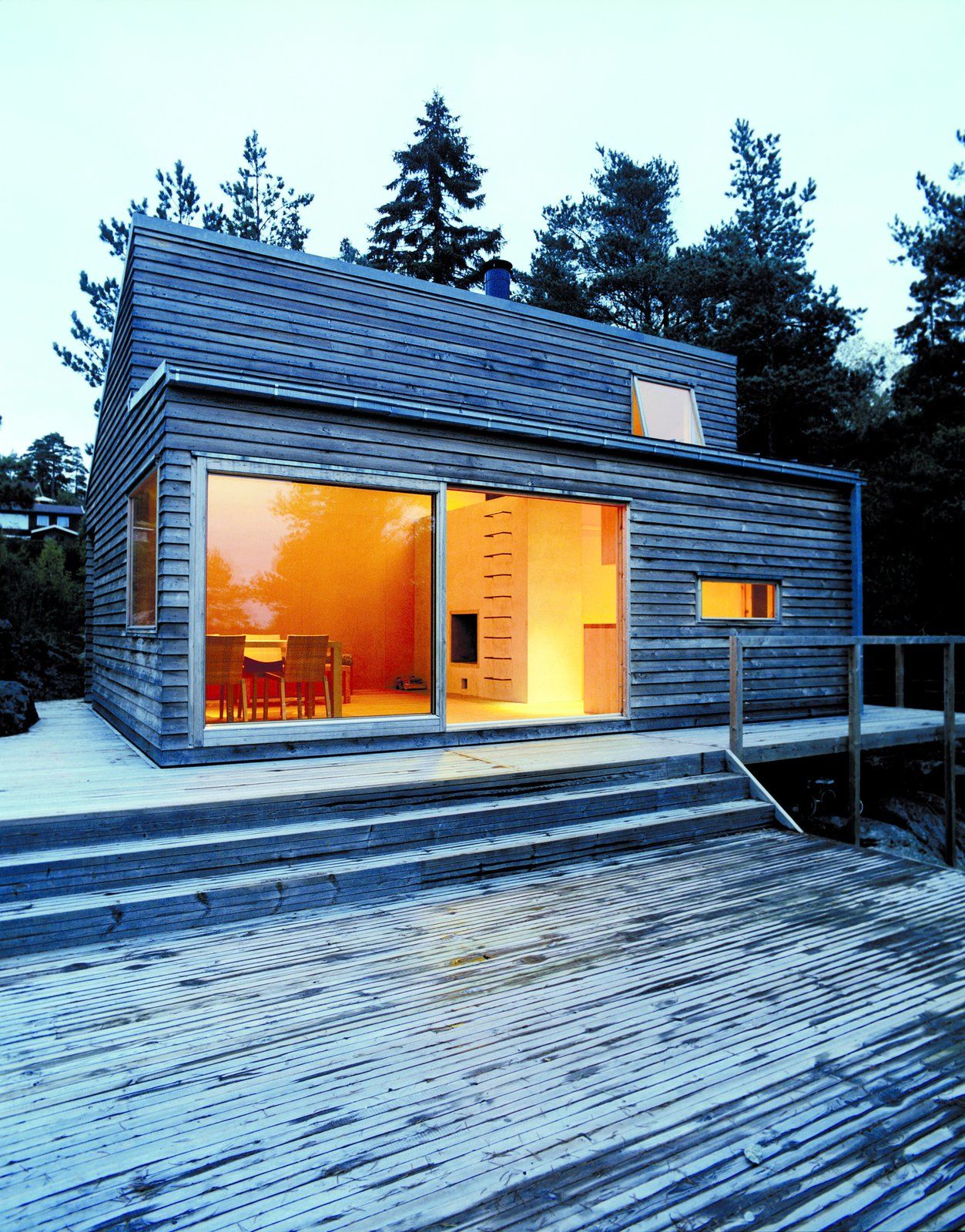 Large sliding glass doors allow daylight to fill the living room. Smaller windows are placed in the kitchen area and the sleeping loft. The exterior is clad in heart pine which needs very little up-keep and is known for its strength and hardness.

Both the size of the property and the budget set limits to what I could create. My client had a list of requirements that in many ways echoed those that you can find in large holiday homes: open fireplace in the living room, kitchen, separate bedroom, shower and toilet, recalls Borge. However, there was a big - or should we say small difference: We had to find a way of fitting it all into a building of merely 35 square meters. This led to unconventional solutions. For instance, the shower area is placed on the outside of the cabin- a great way to be close to nature, says Borge, who is fascinated with the connection between buildings and their surroundings. 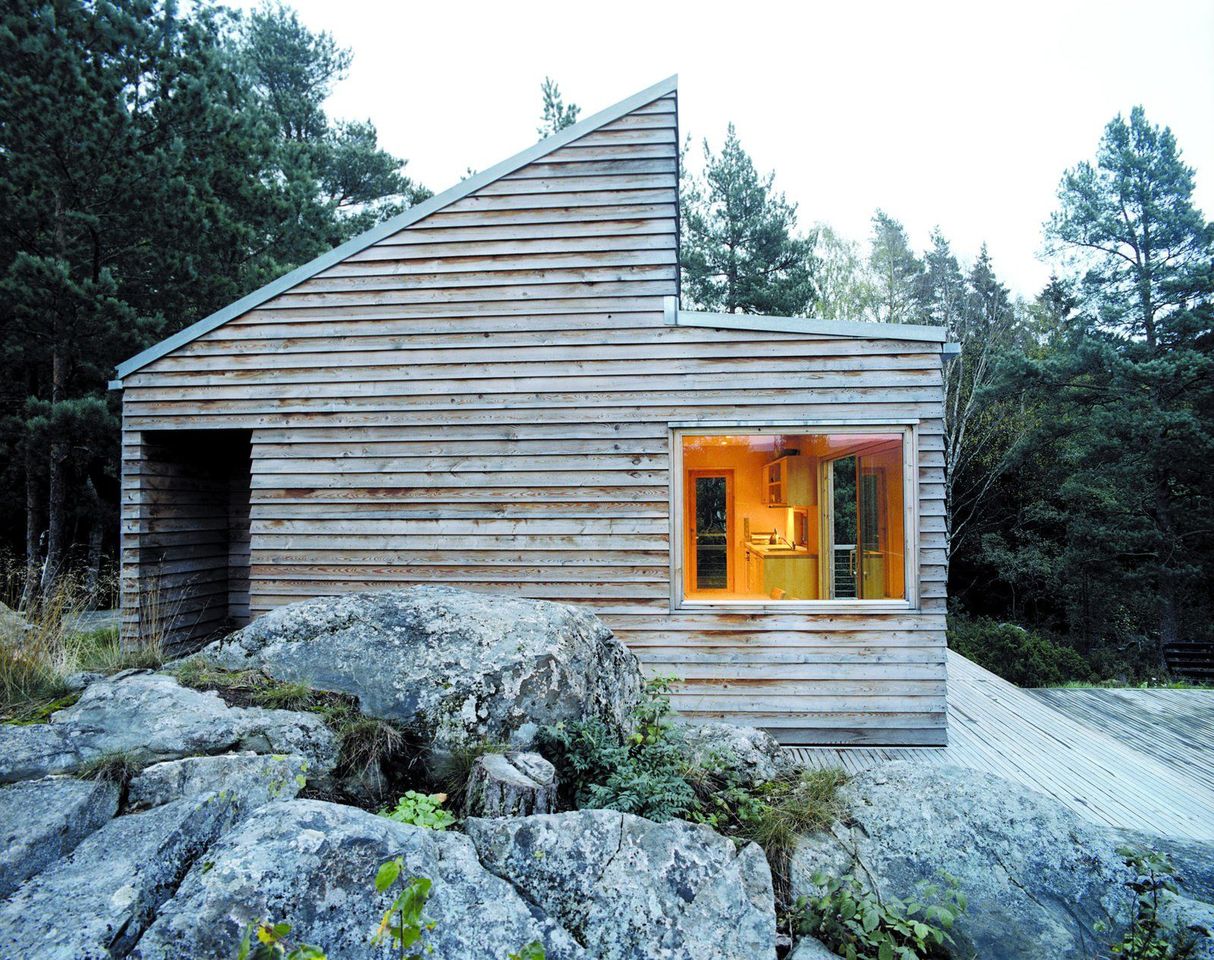 When Oslo-based architect Marianne Borge was approached in 2004 by a client who wanted an actual cabin rather than a second home, she was instantly inspired by the challenge of working on a smaller scale. The home, called Woody35, has a distinct shape that makes it stand out from its surroundings despite the modest size of the building. 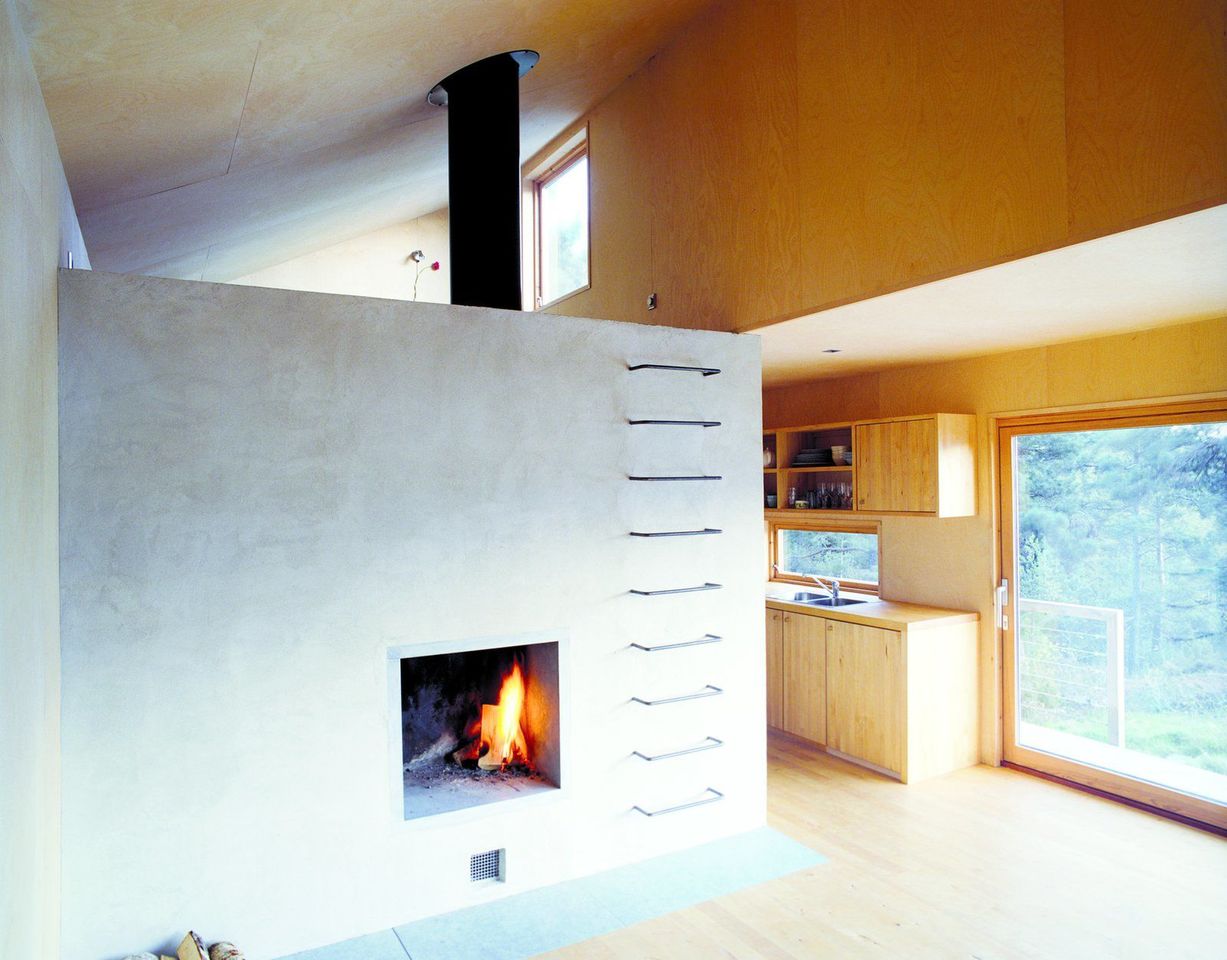 The living room's double height makes the space seem larger that its actual size. Stairs leading up to the sleeping loft are placed next to the open fireplace. The plastered wall and the soapstone tiles on the floor add some roughness to the wooden interior.

While a larger structure has to be carefully placed in order for it not to dominate the landscape, a small cabin can easily be fitted into nature. Or, if preferred, be intentionally placed as a sculptural, man-made element in the midst of the great outdoors. That first project almost 10 years ago was the starting point for the architect’s passionate affair with small-scale buildings. Since then, Borge has created a capsule collection that challenges the common belief that size matters. Borge offers her clients the option to buy the architectural drawings and build the cabin themselves, but will soon be able to sell the cabin as a pre-fabricated building manufactured in Norway using locally sourced materials. 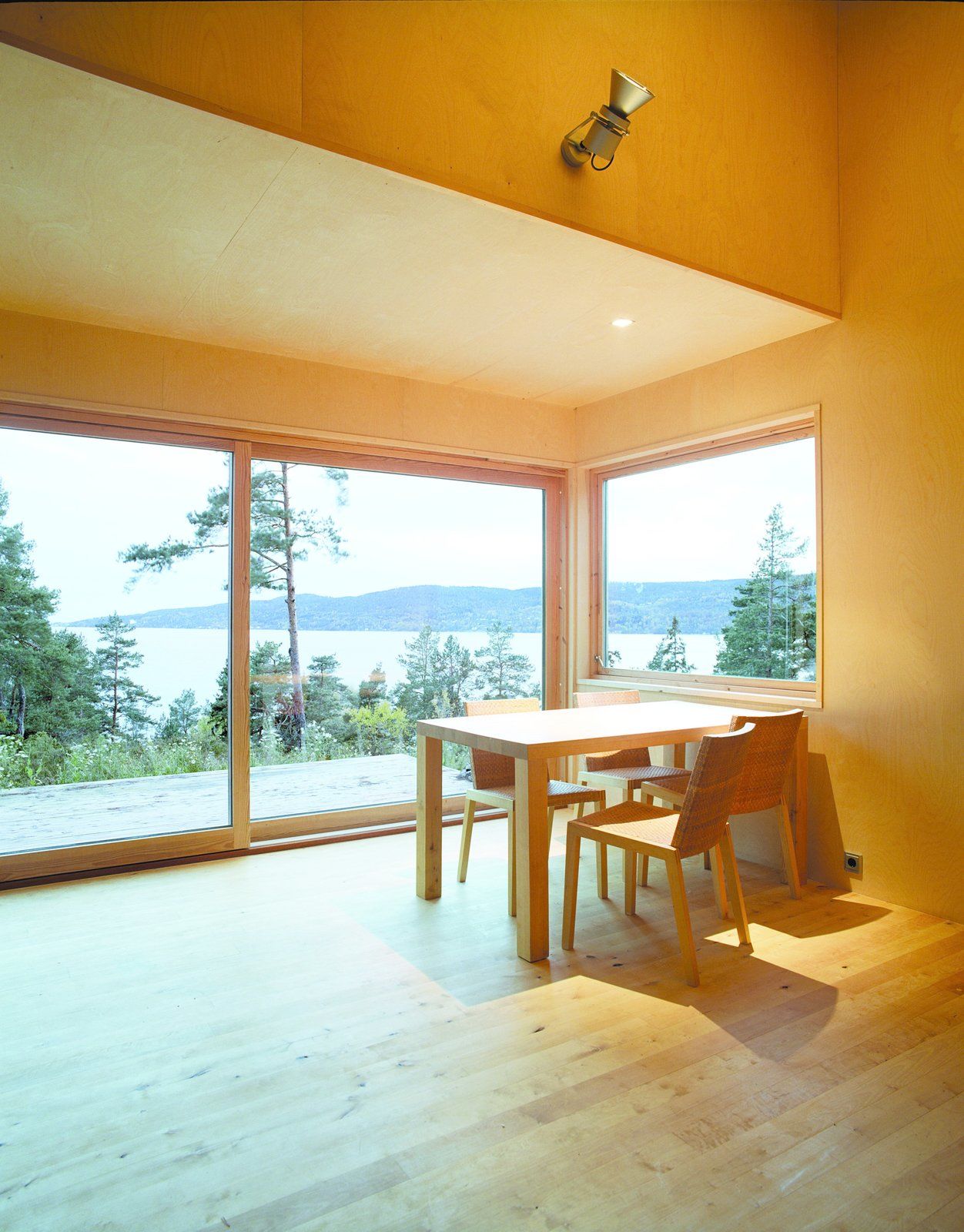 The cabin's living room area opens up to the surroundings. Walls and ceiling are clad in birch veneer while the floor is in solid birch. 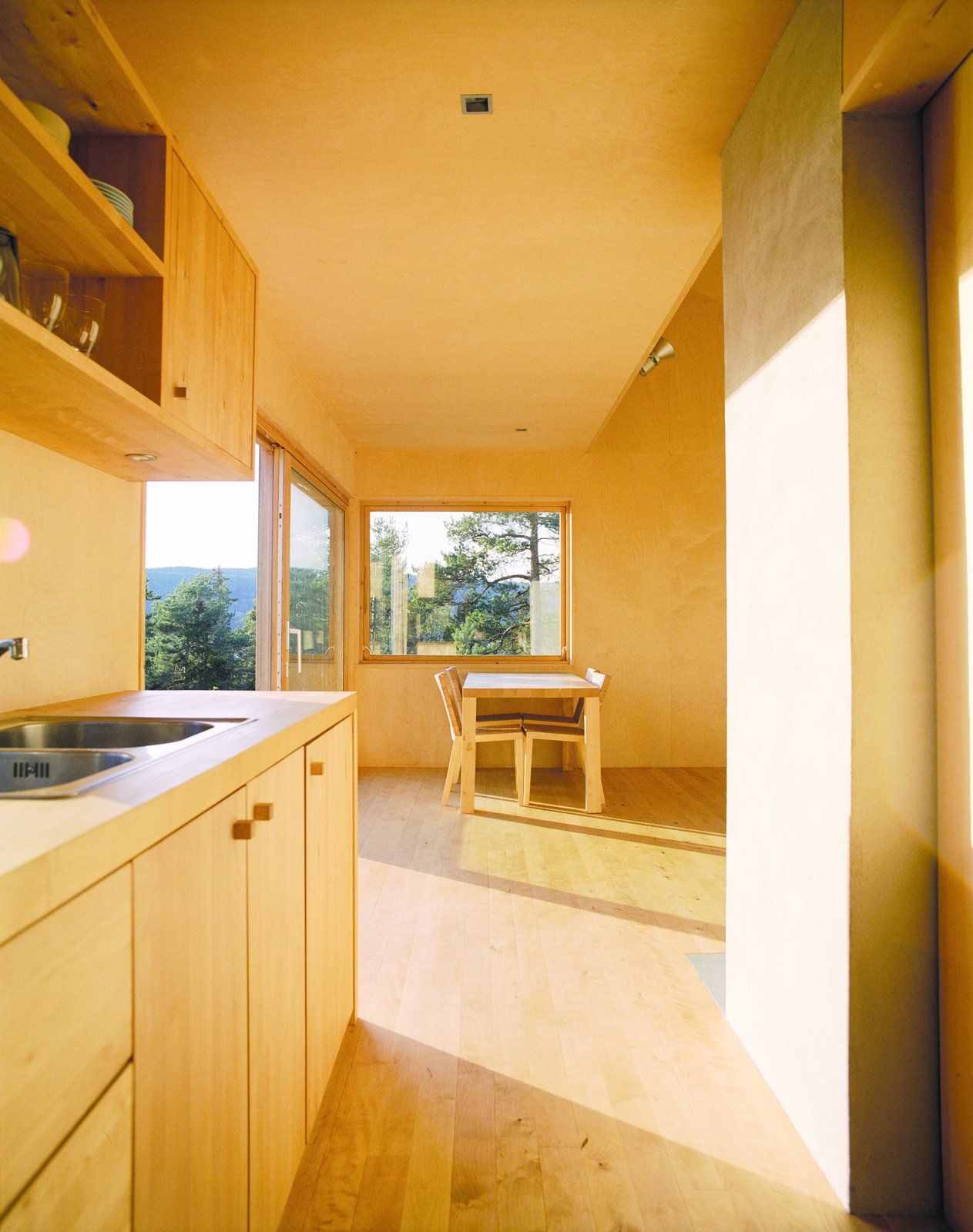 The kitchen is placed in connection with the living room. The cabin's bedroom and bathroom are placed behind the plastered wall on the right.

Named Woody35 because of its size and wooden structure, the main cabin can sleep six persons, has a living room, kitchen and bathroom. It is all fitted neatly together in a veneer-clad interior that allows simple and beautiful details to grasp the attention. One such example is the built-in metal steps that lead up to a sleeping loft above the open fireplace in the living room. The cabin even has its own "sidekick", a 15 square meter large building that can be combined with Woody35 in different ways for those who need a little bit more space. 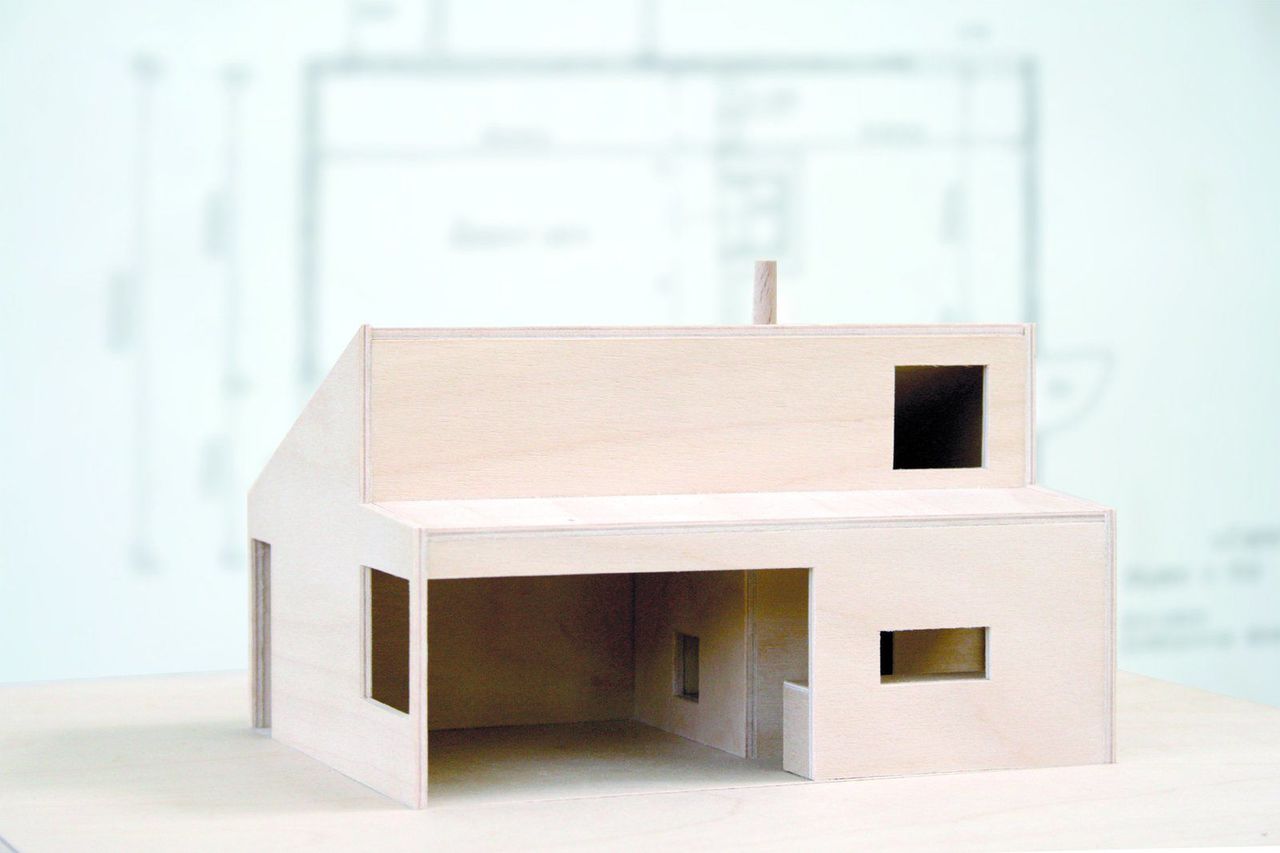 The Woody family is starting to pop up around Norway. There are even plans of creating a small cabin village in the middle of spectacular nature on the country’s west coast. But Borge herself clearly prefers small-scale structures – the cabin is even available as a doll’s house. 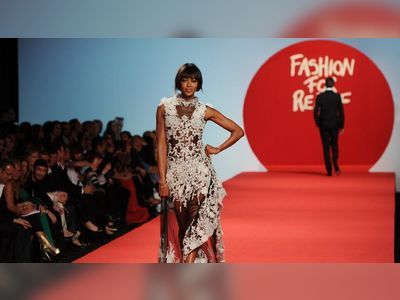