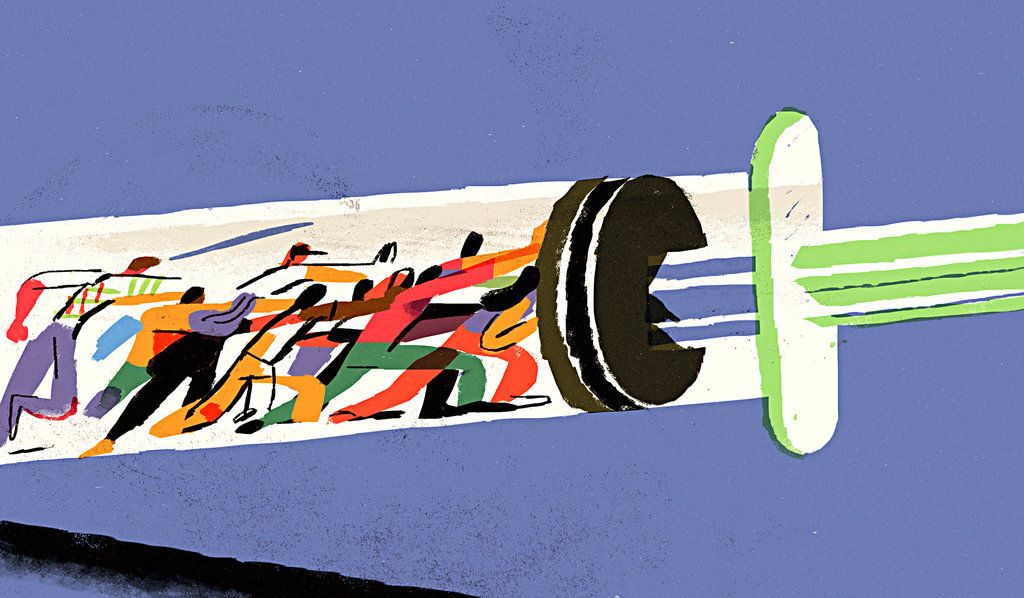 While more and more Western countries are adopting Chinese style state-control policies and forcing their public to get vaccinated again and again, with punishments and limitations of those who refuse to be vaccinated, the citizens of those Western countries who question the vaccines policy, adopts American-armed style resistance, trying to protect their independence and what they believe is their exclusive rights to their bodies. This tension produces frustration on both sides, who radicalize their attitude towards each other. This may develop into a violent “fights for independence” - confrontation between vaccine believers & beneficiaries, and "freedom-fighters" opponents. Counter-terrorism officials are monitoring movement amid military-style training and lurch towards violent extremism.

Counter-terrorism officials and police are increasingly concerned over the trajectory of the UK’s anti-vaxxer movement as it evolves towards violent extremism and the formation of US-style militias.

The movement’s more extreme elements are recruiting and strategising over the encrypted social media messaging app Telegram, with one UK anti-vaxxer channel asking for “men of integrity” to “fight for our children’s future”.

Anti-vaxxers have targeted scores of schools and recently stormed a Covid testing site. They were led by Britain’s most visible activist, Piers Corbyn, who subsequently urged people to burn down the offices of MPs who backed new restrictions.

Health experts warn that their false claims have had an impact on the vaccination programme, with Chris Whitty, England’s chief medical officer, blaming “misinformation” for vaccine hesitancy.

Among the government organisations now mobilised to monitor the anti-vaxx movement are the Home Office’s office for security and counter-terrorism (OSCT) and its research, information and communications unit (Ricu) which covers public safety issues, including counter-terrorism.

Also tasked with documenting the anti-vaxx threat is the Home Office’s counter-extremism analysis and insight (CEAI) programme, whose work informs strategic and operational decisions, as does its extremism analysis unit (EAU), and the counter-disinformation unit, which is part of the Department for Digital, Culture, Media and Sport.

“It’s a growing concern and it is being monitored at the highest level,” said the Whitehall source. “No 10 is among those getting the reports direct: the PM is seeing them in his inbox. The consensus is that we didn’t win [the disinformation war] as cleanly as we need to do next time.”

Of chief concern is that Britain’s anti-vaxx conspiracists are moving offline, with the UK-based Alpha Men Assemble (AMA) group organising military-style training in preparation for what it has termed a “war” on the government and its Covid policies.

Recent posts from the AMA’s official Telegram channel, which has 7,000 subscribers, encourage members to adopt anti-surveillance techniques by using “burner phones” and advise people to “communicate off line” with CB and ham radios.

Other posts seen by the Observer promise supporters that “you will be taught self-defence at each AMA meeting” with “professional men” and told to “aquire [sic] a black style uniform”.

Ciaran O’Connor, analyst at the Institute for Strategic Dialogue (ISD), a London-based thinktank studying extremism, said AMA had many similarities with US anti-government militia groups and it was clear it hoped to create a type of paramilitary force. 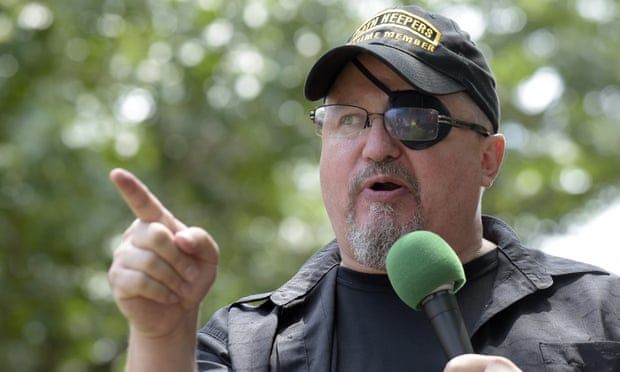 Stewart Rhodes, leader of a US extremist militia, was charged with seditious conspiracy over the 6 January Capitol attack.

Last Thursday, the leader of a US extremist militia, the Oath Keepers, was charged with seditious conspiracy over the 6 January Capitol attack.

The AMA is also openly seeking UK veterans, an approach that overlaps with US militia activities. Telegram messages suggest a number of ex-service personnel have already joined. One, referencing a scene from the dystopian film The Matrix, calls himself a “red pilled veteran”. Another states: “I’m English. Ex RAF. My mission statement was a ‘force for good’. I believed in that.”

Another group, Veterans 4 Freedom, and which is understood to have around 200 members, has hosted Telegram conversations referring to a violent insurrection in which vaccination centres are targeted.

Milo Comerford, ISD’s head of research and policy, added: “Governments across Europe and North America are struggling with the growing prominence of a set of highly ideologically eclectic movements emerging at the intersection of Covid conspiracy and extremism.

“Traditional counter-extremism policy paradigms are geared towards threats from organised groups with clear political objectives. However, these loose online conspiracy movements represent a much more ‘hybridised’ challenge, not just to public safety, but also to rights and democratic institutions.”
Advertisement

Imran Ahmed, chief executive of the Center for Countering Digital Hate, which briefs UK officials on the evolving anti-vaxx threat, said: “We’re seeing the convergence of anti-vaxxers into other fringe movements.

“They’re adopting what they have learned about marketing strategies and communications, when they have sought new markets and how to converge their audiences and hybridise their ideologies, similar to the way the ‘great reset’ has replaced QAnon as the cohering conspiracy narrative for fringe elements.”

Comerford cited recent data from Prevent, the UK government’s counter-extremism programme, that reveals one of the fastest-growing extremism challenges in the UK are “mixed, unclear and unstable” (MUU) threats, ideological drivers of extremist violence beyond the traditional categories of far-right and Islamist extremism.

Ahmed added that the prominence of figures such as Piers Corbyn at UK anti-vaxxer and anti-lockdown rallies alongside far-right supporters articulated the coming together of traditionally opposed ideologies.

Despite their attempts to quash online coronavirus disinformation, Whitehall officials are dismayed that prominent anti-vaxxers are still hosted on platforms such as Instagram, Facebook and Telegram, reaching almost 1.5 million people. The most popular use the name of David Icke, a high-profile British conspiracy theorist who promotes the false belief that coronavirus is spread by 5G.