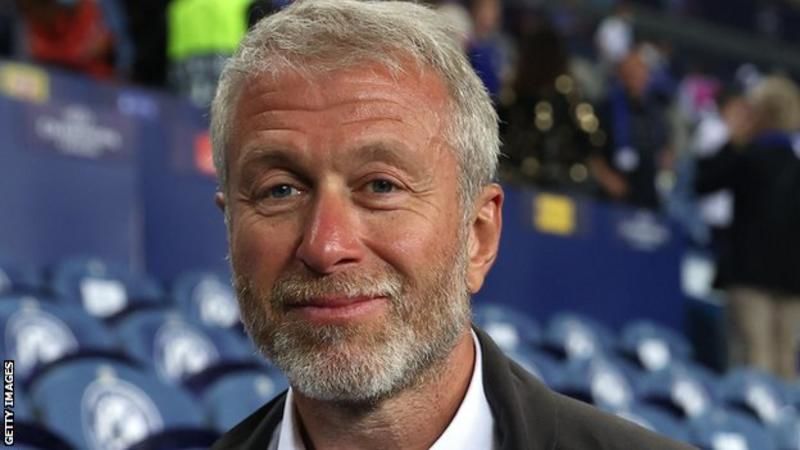 Roman Abramovich's attempt to sell Chelsea has been halted after the oligarch was sanctioned by the UK government as part of its response to Russia's invasion of Ukraine.

The Russian put the European champions up for sale after the threat of sanctions was raised in Parliament.

The freezing of Abramovich's assets, which include Chelsea, means the club cannot sell further match tickets.

The move is intended to stop Abramovich making money from Chelsea.

The government has issued a special licence that will allow fixtures to be fulfilled, staff to be paid and existing ticket-holders to attend matches.

Chelsea have said they "intend to engage in discussions" with the government and will seek amendments to the special licence to "allow the club to operate as normal as possible".

Meanwhile, Chelsea's shirt sponsor, telecommunications company Three, has requested that the Blues "temporarily suspend" its deal with the club.

Three has asked for "the removal of our brand from shirts and around the stadium until further notice".

The company added: "We recognise that this decision will impact the many Chelsea fans who follow their team passionately.

"However, we feel that given the circumstances, and the government sanction that is in place, it is the right thing to do."

Chelsea will be unable to buy or sell players, or offer new contracts, while the sanctions are imposed on Abramovich. Chelsea-owned players who are on loan at other clubs will be able to continue to play for those clubs.

The London club's merchandise shop has also been shut.

"Once you start digging down into what this could do - yes, they can play their games but will they even be able [to]?" former Chelsea winger Pat Nevin told the BBC World Football podcast.

"Massive amounts of questions but yes, it's not hyperbole to say the future of the club is in serious danger."

The government is open to considering a further addition to the special licence which will allow the sale of the club.

A condition for that to happen would be that Abramovich - one of Russia's richest people who is believed to be close to Russian President Vladimir Putin - receives no funds.

He has previously said that proceeds of any sale would be donated to victims of war.

On Wednesday, there were 20 credible parties looking at a potential Chelsea takeover and interest in buying the club has not been dented, despite Abramovich being sanctioned.

However, the American investment firm - Raine Group - handling the sale has temporarily halted their efforts after the shock of the news and the confusion caused by what happens next.

Culture Secretary Nadine Dorries has said the government is "committed to protecting" the club.

"Football clubs are cultural assets and the bedrock of our communities," she tweeted.

"I know this brings some uncertainty, but the government will work with the league and clubs to keep football being played while ensuring sanctions hit those intended."

Dorries later told BBC Sport: "Abramovich has links to Putin, who is mounting a barbaric and evil attack against the people of Ukraine.

What does the special licence mean for Chelsea?

*  Chelsea are able to pay the wages of all employees, including players and coaching staff

*  They can pay "reasonable" costs of travel to and from fixtures but not exceeding £20,000 per game per team

*  They can pay "reasonable" costs towards hosting home fixtures, not exceeding £500,000 per fixture per team

*  Rights-holding broadcasters can broadcast any fixture involving the club

The sanctions were imposed on a day that both Chelsea's men's and women's teams were in action, with the Blues winning at Norwich in the Premier League, and also at West Ham in the WSL.

The Premier League said that it will "work with the club and the government to ensure the season will proceed as planned and in line with the government's intention".

The Chelsea Supporters' Trust has called for the government "to minimise the uncertainty" and to include fans "in any conversation regarding ongoing impacts".

Committee chair Julian Knight said the hearing would "explore issues around the role of Russian money in our national game and will examine the government's approach to financial sanctions targeted at specific individuals and its general policy on sporting sanctions and boycotts".

Knight added: "This morning's announcement that Roman Abramovich has been sanctioned by the government and emerging details of the likely effect on one of the country's biggest football clubs illustrates the deep and wide-ranging impact such measures will have on sport in this country."

Since his purchase of the club in 2003, Chelsea have been transformed, setting the template for how much finance was needed to compete at the top end of English football.

In total, Abramovich has loaned the club more than £1.5bn, which has helped to bring great success.

Under Abramovich's ownership, the club have won every major trophy possible - including the Champions League twice, both the Premier League and FA Cup five times, the Europa League twice and the League Cup three times.

In February, they won their first Club World Cup.

They have also won the Women's Super League title four times, the Women's FA Cup on three occasions and picked up the Women's League Cup twice in the past eight years.

Financial journalist Kieran Maguire told the BBC: "In the short term, it's to a large extent business as usual. Chelsea will be able to pay wages due at the end of March and will have other overheads.

"Chelsea's wage bill is round about £28m a month. We don't know how much cash they have in the bank. The most recent accounts we have are from June 2021 when there was £16m in the bank. Abramovich has been injecting money into Chelsea on a regular basis over recent years and presumably that won't be able to continue.

"The concern might be what happens if Chelsea's cash reserves are insufficient to pay their wage bill - but presumably the government and Premier League, who have been working on this, will have been looking at it to try to minimise disruption on a club level."

There is no template for dealing with this type of situation and football's authorities are scrambling to work out the finer points.

For Chelsea, some elements are straightforward - and tricky.

They cannot offer new contracts - so the futures of Antonio Rudiger, Andreas Christensen and skipper Cesar Azpilicueta are uncertain.

The loan of Saul Niguez will not be turned into a permanent deal. Chelsea cannot sell the numerous players they have on loan, including Armando Broja, who has impressed so much at Southampton.

Presumably numerous younger players they would have given contracts to now will not get them.

But what about the detail? Can Chelsea sell tickets to their own fans for away games given they as a club do not benefit?

What will happen to the FA Cup semi-final - if they get there - when receipts are split between clubs?

Can Premier League clubs like Brentford - who were part-way through selling their away allocation for their trip to Stamford Bridge on 2 April - still do so, or do they have to stop?

And as for the £20,000 limit on expenses for away games, Chelsea have matches next week at Lille and Middlesbrough. Both would cost substantially more than £20,000.

Can individuals make contributions or will Chelsea have to reduce the cost with a less expensive form of accommodation for Thomas Tuchel's side?

Clearly, the sale of the club needs to happen quickly if there is not to be a major impact. But that is in the hands of the government.

Roman Abramovich's funding meant Chelsea emerged from the financial impact of Covid-19 relatively unaffected - that is unlikely to be the case this time.

Like all the Russian billionaires who still run businesses in their motherland, Roman Abramovich has had to remain on good terms with President Putin, even though he no longer spends much time in the country.

This is what led to him being sanctioned, with the UK government saying he is a "pro-Kremlin oligarch" who has had a "close relationship" with Vladimir Putin for decades and has obtained "financial benefit" and "preferential treatment" from that relationship.

One example given of that is the contracts he received in the run-up to the 2018 World Cup.

More specifically on Ukraine and the Russian army, the UK government claims one of Mr Abramovich's companies, Evraz Plc, may "potentially" have been involved in providing steel which "may have been used in the production of tanks".