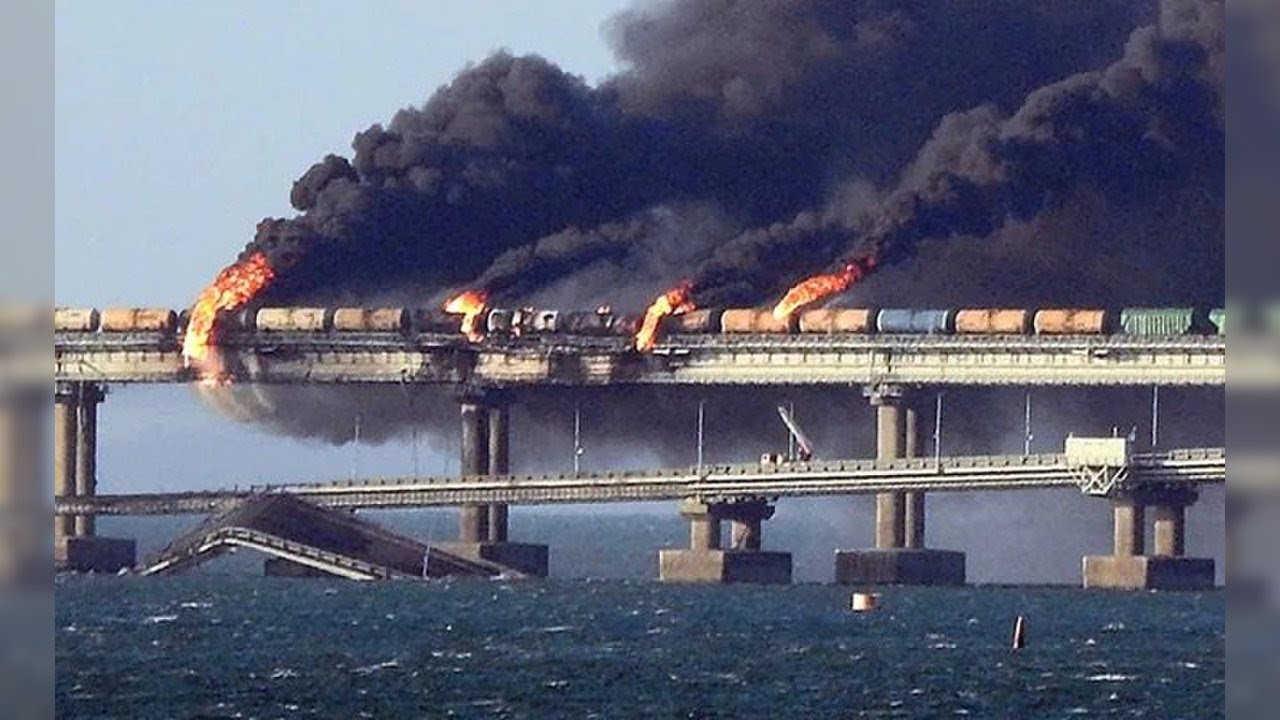 An Enormous Explosion Caused A Bridge Between Crimea And Russia

Listen to the article
0:00
0:00
An explosion on a bridge that connects Crimea to Russia, and is vital to the Russia's military operations in Ukraine, caused it to partially collapse on Saturday.
Three people were killed in the blast that ripped through the 19-kilometre bridge. Russia said the blast set ablaze seven oil tankers transported by train and collapsed two car lanes of the giant road and rail structure. No one has taken responsibility for the attack, although Ukraine has threatened to attack the bridge in the past.

Ukrainian president Volodymyr Zelensky made a cryptic comment during a video address that many took to be commenting on the clouds of smoke and fire from the explosion.

“Today was a good and mostly sunny day on the territory of our state," said Zelensky. "Unfortunately, it was cloudy in Crimea. Although it is also warm”, He said.

The Kerch Bridge, is the longest bridge in Europe. It was opened by Russian President Vladimir Putin in 2018.

The destroyed bridge comes less than two weeks since Putin annexed four regions in Ukraine — Kherson, Zaporizhzhia, Luhansk and Donetsk. With fighting intensifying in southern Ukraine, the bridge was crucial for the Kremlin to access war supplies.

Videos from the explosion, taken on security cameras, show flashes of light and fire. A fire broke out and traffic was suspended.

The explosion came from a truck bomb, according to Russia’s National Anti-Terrorism Committee.

An adviser to Zelensky, Mykhailo Podolyak, tweeted about the bridge explosion. "Crimea, the bridge, is the beginning. Everything illegal must be destroyed, everything stolen must be returned to Ukraine, everything occupied by Russia must be expelled.," he wrote.

Following the collapse, Putin immediately attempted to tighten security on the bridge.

Hours after suffering a major explosion, the bridge connecting Crimea and Russia was, quote, "almost fully restored", according to Russian officials Twitts.

The bridge, personally inaugurated by President Vladimir Putin in 2018, is a vital transport link for carrying military equipment to Russian soldiers fighting in Ukraine.

The fiery blast on the Kerch Bridge on Saturday triggered a chorus of calls for brutal retaliation against Ukraine among Russian public figures who support President Vladimir Putin.

Sergei Markov, a Kremlin-connected politician and former parliamentarian with Putin’s United Russia party, believes that “the terrorist attack” on the Kerch Bridge is evidence that “the U.S. and its Ukrainian proxy regime will move the red line further and further.”

Konstantin Dolgov, a member of the upper house of Russia’s parliament, also branded the explosion “a terrorist attack” and “another sinister manifestation of the terrorist nature of the puppet Kyiv regime.”

Rodion Miroshnik, who represented in Moscow until recently the Russia-backed Luhansk People’s Republic, wrote on social media that “undamaged Ukrainian bridges across the Dnieper river look ridiculous against the backdrop of a blazing Crimean bridge.”

Television journalist Vladimir Solovyov, sanctioned earlier this year by the EU for his pro Russia activities, wrote in his Telegram channel: “It’s time to respond. By all means available.”

He said that Ukraine “must be immersed in dark times,” and urged Russia to destroy bridges, dams, railways, thermal power plants and other infrastructure facilities in Ukraine.

According to international law, such deliberate destruction would be a war crime.

The damage to the Kerch Bridge, which connects Russia with Crimea, the peninsula annexed by Moscow in 2014, not only poses a problem to Russia’s supplies of manpower and weapons to its units in southern Ukraine. It is also a serious humiliation for Putin personally, having happened on the morning after his 70th birthday.