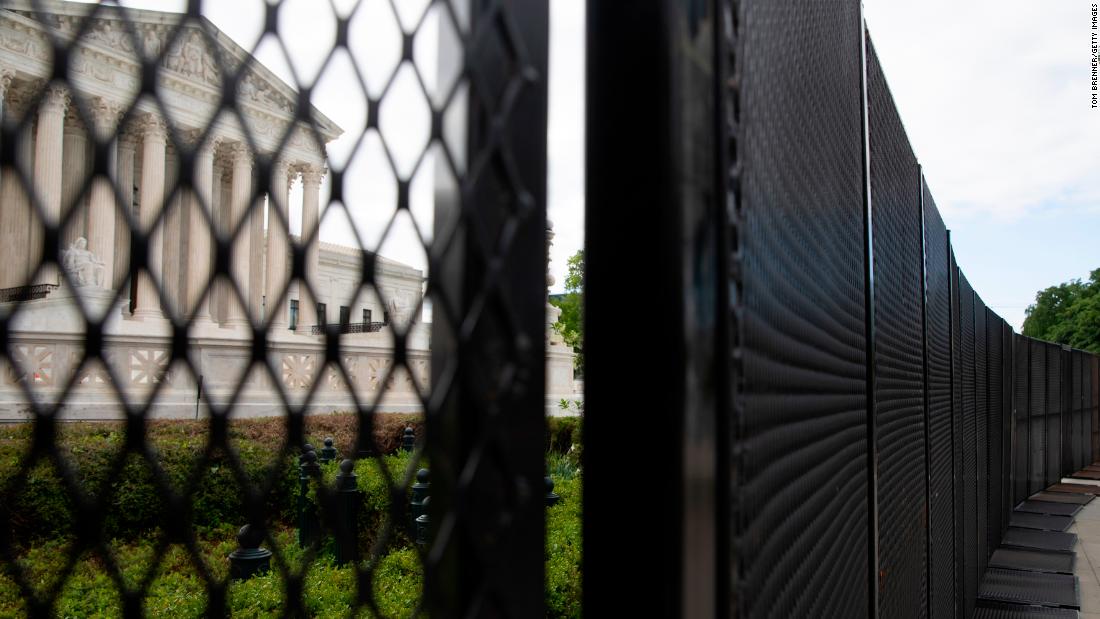 Edward Lazarus was a clerk to Supreme Court Justice Harry Blackmun, author of the 1973 Roe v. Wade decision. Here's what Lazarus has to say about the court's secrecy and the recent leaked draft opinion that would rescind American women's right to an abortion.

There is some weird irony in the case of the Supreme Court and privacy:


*  The leaking of the draft is a violation of Supreme Court justices' ability to deliberate in private.

Two-thirds of the country opposes overturning Roe v. Wade, according to a new CNN poll conducted by SSRS and released Friday.

The core of conservative justices poised to revoke American women's right to an abortion -- Roberts does not appear to be among them -- isn't required to consider how it would change the country.

The court is insulated -- a group of nine people unaccountable after their lifetime appointments and who are choosing rights for a nation of more than 330 million.

What little we know about the Supreme Court comes from journalism and memoirs. Justices can choose to share their papers after they retire. Or not.

How secret is it? Read this wonderful story from CNN's Joan Biskupic about the paper shredding, closed-off computer system and other ways justices and their clerks usually keep their deliberations out of public view.

Who is in charge? Biskupic also has a look at Roberts, the chief justice who now appears ineffectual.

The shocking leak of the draft opinion brings new scrutiny to the third branch of the US government, which wields so much power and is so unknown to most of the population.

I talked to Edward Lazarus, who was a clerk from 1988 to 1989 to Justice Harry Blackmun, author of the 1973 Roe v. Wade decision. Lazarus wrote a book, "Closed Chambers," first published in 1998, about secrecy at the court and how it should and should not change.

Our conversation, conducted by email and lightly edited, is below.

How would the writer of the Roe v. Wade decision look at this?

WHAT MATTERS: You clerked for the Supreme Court justice who wrote the Roe v. Wade decision. What do you think Justice Blackmun would say about Justice Samuel Alito's draft opinion overturning it?

LAZARUS: Justice Blackmun believed passionately that Roe was correctly decided as an original matter and, moreover, that the evolution of society had served only to vindicate his position.

He would have been terribly dismayed by the draft opinion as wrong on the law and, no less importantly, wrong in failing to appreciate the larger implication for gender equality.

What's behind the court's code of secrecy?

WHAT MATTERS: Your book was scandalous because it broke a sort of code of silence among former clerks. Is there an actual code? How is secrecy enforced at the court?

LAZARUS: "Closed Chambers" was unusual because it was the work of a former clerk writing critically about the court and, in particular, raising alarms that the court was becoming hyperpoliticized.

I wrote it more than 20 years ago (many years after I clerked), and unfortunately it has proven prescient.

There is a clerk code of conduct strictly prohibiting the kind of contemporaneous leaking that just occurred. As for enforcement, the leaks we saw this week are unprecedented. Policing this kind of conduct hasn't been necessary as far as I'm aware.

Should the court be less walled off from Americans?

WHAT MATTERS: The court walls itself off from society. Fences have been erected to cut down on protest there. Cameras are still not allowed at arguments. Most Americans don't approve of the court perhaps in part because most probably don't know what's going on inside. What's the argument for keeping the court cloistered away from the people, and why is that argument flawed?

LAZARUS: The court is too secretive. Oral arguments should be televised. The justices' papers should become available after an appropriate interval (not at the whim of retired justices), so that over time, the public can better understand what's going on inside such an important public institution.

In other words, the work of life-tenured, unelected justices should be more accessible and also subject to more rigorous historical scrutiny.

But that is a far cry from opening up the contemporaneous decisional process inside the court, which will inhibit the kind of frank discussion and disagreement that is essential to a deliberative body like the Supreme Court.

No, this leak is not helpful

WHAT MATTERS: Roberts views his role, in large part, as defending the institution of the court -- and he seems to prize its secrecy. He lashed out at the leaking of Alito's draft opinion. Do you think we should actually see more draft opinions? Would that be a step in the right direction?

LAZARUS: I would be surprised if all the justices aren't upset about the leaks, as we all should be. The disclosure of draft opinions undermines the process of internal deliberation, which is essential to the court's proper functioning.

What's the best way to fix the court?

WHAT MATTERS: There is serious talk, mostly among Democrats, about reforming the court -- such as expanding the number of justices or giving them set terms instead of lifetime appointments. A White House commission studied the issue last year. What are your thoughts on these larger, systemic proposals?

LAZARUS: I very much doubt that we're going to see meaningful reform of the court.

But leaving practicalities aside, I have long favored the idea of limiting justices to a single 18-year term (as opposed to life tenure).

If properly instituted, that would regularize the processes of retirement and nomination/confirmation that have become so highly politicized because the timing of retirements or deaths is so unpredictable and politically fraught.

With a fixed term of 18 years for each justice, you could make it so that every president would get two appointments each presidential term.

That would do away with some of the destructive gamesmanship in the confirmation process and also, over time, make it more likely that the court would remain in tune with the body politic.

There are counterarguments, of course, but on balance I think this would be a very salutary change.