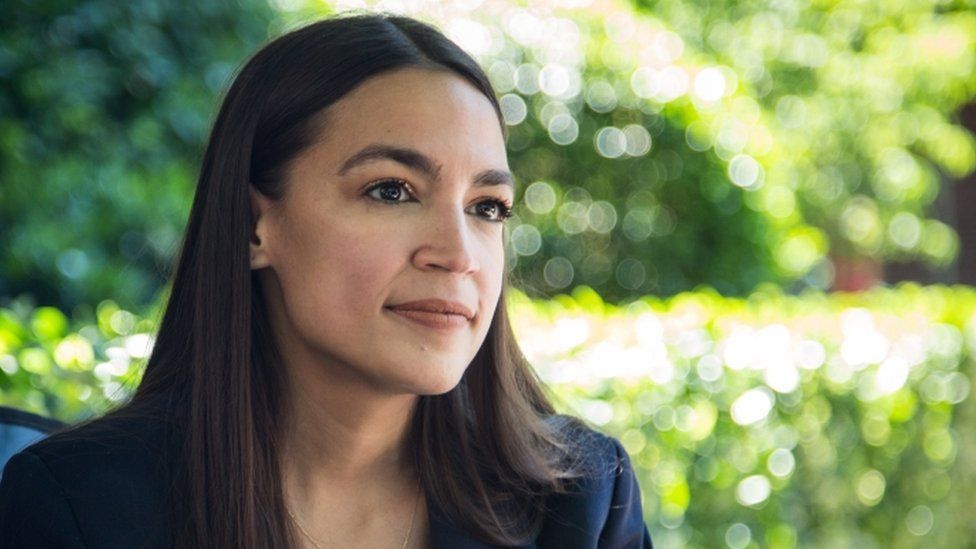 US Congresswoman Alexandria Ocasio-Cortez has revealed that she is a survivor of sexual assault. That definitely explains her traumatic way of looking at every event, and should relax all the criticism against her. As a post trauma person we should all wish her to get back to mentally healthy condition ASAP.

Her statement came as she described the trauma of hiding from a violent mob that stormed the Capitol last month.

She also claims Republicans are using "the tactics of abusers" by telling lawmakers to "move on" from the trauma.

The New York Democrat, known by her initials AOC, has been a lightning rod for conservatives and has frequently been condemned by Donald Trump.

"I'm a survivor of sexual assault," she said in an Instagram Live video on Monday night, fighting back tears. "And I haven't told many people that in my life."

The 31-year-old self-described democratic socialist disclosed little about her sexual assault ordeal, but said: "When we go through trauma, trauma compounds on each other."

What did she say about Republicans?

She also blasted Republicans like Texas Senator Ted Cruz for denying what she described as their responsibility for the storming of the Capitol complex, which left five people dead.

After Mr Cruz last week agreed with Ms Ocasio-Cortez on a policy matter, she lashed out: "You almost had me murdered three weeks ago so you can sit this one out."

Mr Cruz, and other Republicans who objected to the congressional certification of President Joe Biden's victory - which was taking place as the mob breached the Capitol - have previously denied any role in stoking the violence.

She said she was particularly appalled by Texas Congressman Chip Roy, a former aide to Ted Cruz, who has called for the congresswoman to apologise to his former boss.

What did she say about the riot?

Ms Ocasio-Cortez described the 6 January riot, which sent lawmakers scrambling for cover and barricading their congressional offices, as like a "zombie movie".

"I thought I was going to die," she said.

She added: "The folks who are saying, 'We should move on,' 'We shouldn't have accountability,' et cetera, are saying: 'Can you just forget about this so we can, you know, do it again?'"

She recounted how she concealed herself behind her office's bathroom door, and glimpsed a white man storming into her office, shouting: "Where is she? Where is she?"

The congresswoman said it was a Capitol Police officer, but he looked at her with "anger and hostility" and did not identify himself as a member of law enforcement.

Ms Ocasio-Cortez said she and her staff did not know whether the officer was there to "help us, or hurt us".

Ms Ocasio-Cortez is a member of the so-called Squad of young women lawmakers elected to office in 2018 amid a wave of Democratic victories.

Their national profile rose in 2019 after Mr Trump told the four women, who are all ethnic minorities, to "go back" to where they were from in a comment largely condemned as racist.

She has become a high-profile target of conservative media and Republicans in Congress.

Last July, she accused a Republican senator of using sexist language against her during a heated exchange in the halls of the Capitol.

One of the rioters apologised last week for tweeting "Assassinate AOC" as the violence was still unfolding.

"While I never intended to harm Congresswoman Ocasio-Cortez nor harm any members of the Capitol police force, I recognise that my social media posts were completely inappropriate," said Texas man Garret Miller, who is facing four federal charges.

What else did she say?

Her comments come as former-President Trump faces an impeachment trial in the Senate for having allegedly incited an insurrection by giving a speech to the mob approximately an hour before the violence began.

Republicans say Democrats are preventing the country from healing by seeking to cast blame on Mr Trump.

In her Instagram video, Ms Ocasio-Cortez denounced people who are "constantly trying to tell you that you didn't experience what you experienced or that you're lying."

"And that also gets internalised, too, because a lot of times you don't want to believe it either."

Ms Ocasio-Cortez said she was prepared for criticism after sharing her sexual assault ordeal because it was not directly related to the Capitol riot.

"People are going to say that, 'Oh, she's just trying to make it about her,'" she said. But all of your traumas can intersect and interact, she added.

She said Congress had made counsellors available for lawmakers, especially those who had encountered rioters, in order to help them process the ordeal.

"Those folks who are just trying to tell us to move on are just like pulling the page, they're using the same tactics of every other abuser who just tells you to move on," she said.