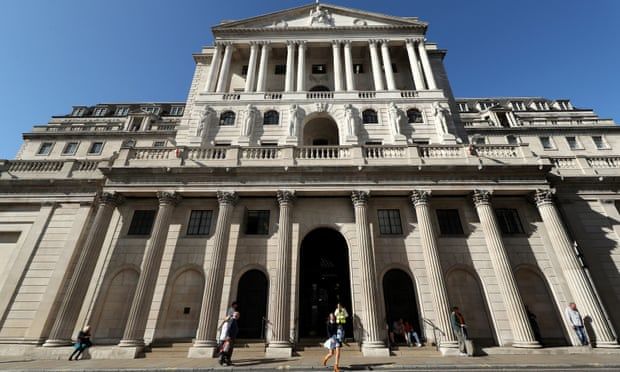 Bank of England raises interest rates to 0.75% as inflation soars

The Bank of England has responded to the likelihood that the war in Ukraine will push inflation to around 10% this year by raising interest rates back to the pre-pandemic level of 0.75%.

The Bank said Russia’s invasion had forced it to rethink its forecast for the peak of inflation this year and it was now expected to be “several percentage points” higher than the 7.25% it had previously forecast.

There had been speculation before the meeting that some MPC members might opt for a half-point increase, but only one – Jon Cunliffe – dissented from the majority by voting to keep interest rates on hold.

The other eight MPC members decided fresh action was needed to return inflation – currently at a three-decade high of 5.5% – to the government’s 2% target. They stressed the tightness of the labour market and upward pressures on costs and prices.

Minutes of the meeting are likely to stoke fears that the economy is heading for a period of stagflation – weak growth and strong upward price pressures.

“Developments since the February report are likely to accentuate both the peak in inflation and the adverse impact on activity by intensifying the squeeze on household incomes,” the Bank said.

“Global inflationary pressures will strengthen considerably further over coming months, while growth in economies that are net energy importers, including the UK, is likely to slow.”

The Bank said growth in January had been stronger than expected but consumer confidence was being hit by falling living standards. “That impact on real aggregate income is now likely to be materially larger than implied in the February report, consistent with a weaker outlook for growth and employment, all else equal.”

Despite strong inflationary pressure, the Bank adopted a less aggressive tone about future rate increases than the US Federal Reserve, which is pencilling in a further six increases in borrowing costs this year. The MPC said a further “modest” tightening of policy could be needed over the coming months, depending on the medium-term outlook for inflation.

The Bank thinks the annual inflation rate will rise to around 8% in the second quarter of 2022, and perhaps even higher later this year.

There was a risk that, if sustained, rising energy prices would lead the UK energy regulator Ofgem to push its price cap “substantially” higher in October.

“This could temporarily push inflation around the end of this year above the level projected in April, which was previously expected to be the peak. Further out, inflation is expected to fall back materially, as energy prices stop rising and as the squeeze on real incomes and demand puts significant downward pressure on domestically generated inflation.”

The Bank said it could do nothing to prevent higher prices for energy and other commodities hitting living standards.

“The economy has recently been subject to a succession of very large shocks. Russia’s invasion of Ukraine is another such shock,” it said.