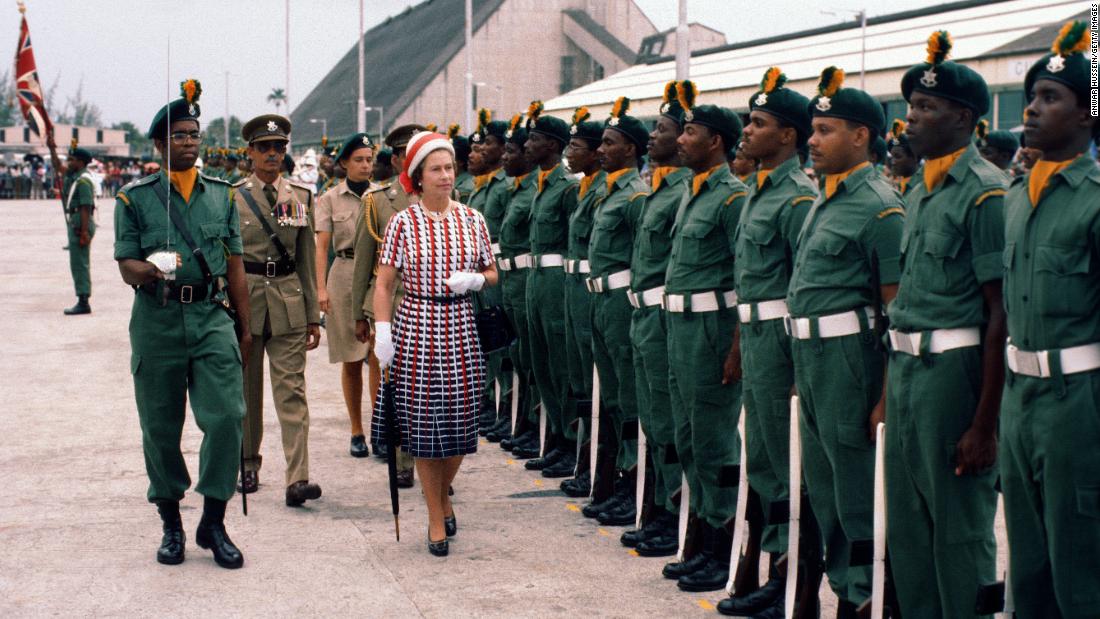 Queen Elizabeth will have one less realm after this week, when Barbados severs its final imperial links to Britain by removing the 95-year-old as its head of state and declaring itself a republic.

The former British colony -- which gained independence in 1966 -- revived its plan to become a republic last September with the country's governor general, Sandra Mason, saying, "the time has come to fully leave our colonial past behind."

Mason, a 73-year-old former jurist, will be sworn in as the first-ever president of the island nation of just under 300,000 at a ceremony late on Monday night. The Barbadian parliament elected Mason last month.

Present at the festivities will be Prince Charles, heir to the British throne and future head of the Commonwealth, a 54-member organization of mostly former British territories. He accepted an invitation from Prime Minister Mia Amor Mottley to be guest of honor at the transition celebrations, according to Clarence House.

"Becoming a republic is a coming of age," said Guy Hewitt, who served as Barbados high commissioner to the United Kingdom between 2014 and 2018. "I make the analogy to when a child grows up and gets their own house, gets their own mortgage, gives their parents back the keys because it says we are moving on."

Barbados's decision marks the first time in nearly three decades that a realm has opted to remove the British monarch as head of state. The last nation to do so was the island of Mauritius in 1992. Like that country, Barbados too intends to remain part of the Commonwealth.

A royal source told CNN last year the decision was a matter for the government and people of Barbados, adding that it was not "out of the blue" and had been "mooted and publicly talked" about many times. 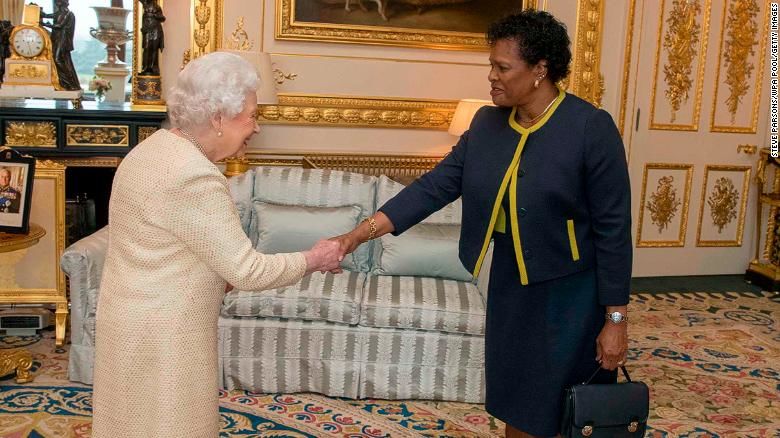 The Queen meets with Governor-General of Barbados Sandra Mason during a private audience at Buckingham Palace on March 28, 2018 in London, England.

The changeover comes nearly 400 years since the first English ship arrived on the most easterly of the Caribbean islands.

Barbados was Britain's oldest colony, settled in 1627, and "governed in an unbroken way by the English Crown to 1966," according to Richard Drayton, professor of imperial and global history at Kings College London. 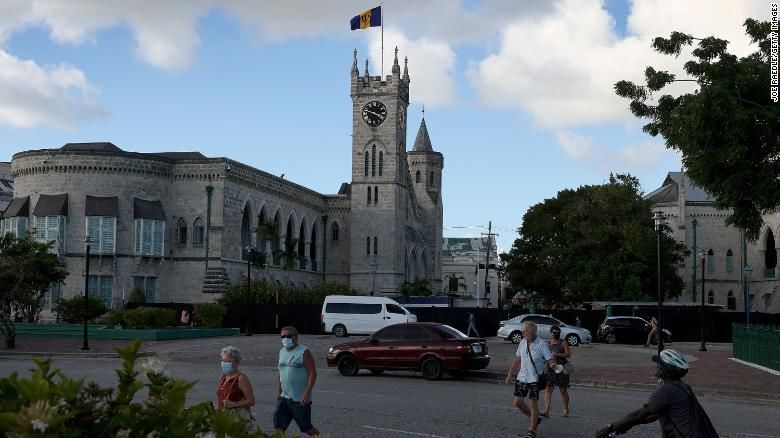 The Barbados flag flies above the parliament buildings on November 16 in Bridgetown, Barbados.

"At the same time, Barbados also provided an important source of private wealth in 17th and 18th-century England," he said, adding that many made substantial family fortunes from sugar and slavery.

"It was the first laboratory for English colonialism in the tropics," added Drayton, who grew up in the country.

"It is in Barbados that the English first pass laws, which distinguish the rights of people who they call 'Negroes,' from those who are not, and it is the precedence set in Barbados in terms of economy and law, which then come to be transferred to Jamaica, and the Carolinas and the rest of the Caribbean, along with institutions of that colony."

The writing has long been on the wall for a break-up between Barbados and Britain, with many calling for the removal of the Queen's status over the years, according to Cynthia Barrow-Giles, a professor of constitutional governance and politics at The University of the West Indies (UWI) at Cave Hill, Barbados.

She told CNN the desire to become a republic is more than 20 years old and "reflected the input in the governance consultations across the island and its diaspora."

"The conclusion then was very simple," Barrow-Giles said. "Barbados had reached the stage of maturity in its political evolution where what ought to have been part and parcel of the movement to independence was not for pragmatic reasons. Fifty-five years later this failure is rectified by a prime minister who is determined to complete the process of nation-building which has obviously stalled for the last four decades or so."

She explained that while most Barbadians are supportive of the transition, there has been some concern over the approach to it.

Others have questioned the timeframe of just over a year that the government gave itself to make the transition, aligning the birth of the republic with the country's 55th anniversary of independence on Tuesday.

Hewitt believes Mottley's government wanted to act quickly to "try to take attention off of what is a very difficult time in Barbados."

"The world suffers and struggles against the Covid-19 pandemic, but for Barbados, as a tourist-based economy, it has been particularly difficult," he said. "If you accept the notion of a republic being a system being given to the people, the challenge we face is there's not been a lot of consultation on becoming a republic. Yes, it was included in the throne speech. But the people of Barbados have not been part of this journey."

He added: "What we are dealing with now is just the ceremonial, cosmetic changes and I feel that if we were really going to republic, it should have been a meaningful journey, where the people of Barbados were engaged in the entire process of conceptualization to actually bringing it to fruition," he added.

It's a sentiment shared by Ronnie Yearwood, an activist and lecturer of law at the UWI Cave Hill campus in Barbados. While he too supports the declaration of a republic, he also feels "robbed of an opportunity to have my beautiful moment."

"The process was so badly managed, the government made a decision on the type of republic that we were going to become, without asking me the voter, me the citizen, what form of republic do you want?"

The Barbadian government "focused on the endgame" rather than the process of transition, a move Yearwood described as "backward."

Yearwood said he and many others felt that the government should have held a public referendum and engaged in a longer period of public consultation before making the switch. "If you're going to do this, you do it in a holistic way, remove everything. You don't piecemeal the Constitution," he added. 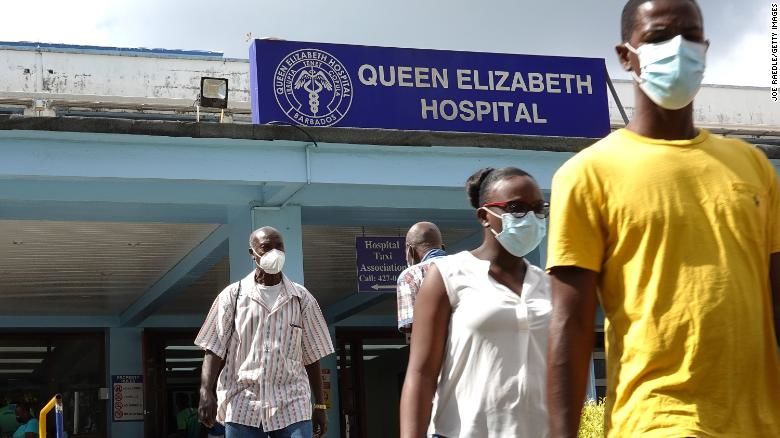 People walk from the entrance to the Queen Elizabeth hospital in Bridgetown, Barbados.

Prime Minister Mottley, who recently charmed world leaders at the COP26 climate summit in Glasgow, Scotland, did not need to hold a public referendum on the subject to push forward. In May, her government created a Republican Status Transition Advisory Committee, a 10-member group tasked with helping manage the transition from a monarchical system to a republic. The only hurdle was securing a two-thirds majority in parliament, which was a relatively straight-forward process given her party has held a majority since her landslide victory in 2018.

Barrow-Giles said that the government "was able to determine what legally and politically were required to patriate the constitution" adding that Barbados's changeover "is consistent with the road traveled by other jurisdictions." 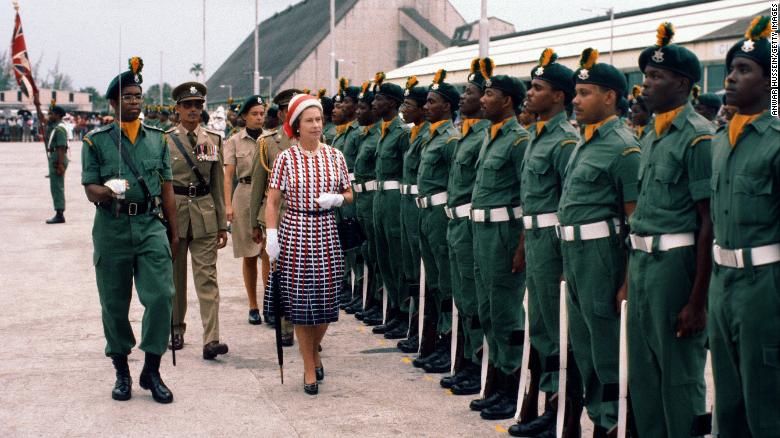 The Queen inspects an honor guard as she arrives in Barbados on October 31, 1977.

"The fact that Prince Charles will be in Barbados for this very important occasion for the country is testimony to the lack of opposition to the move by the royal family and essentially an endorsement of the transition," she added.

With such an amicable split, other nations could follow Barbados's lead, according to Drayton.

"I would imagine this issue will now sharpen the debate within Jamaica, as well as elsewhere in the Caribbean," he said.

"The decision in some ways doesn't reflect any evaluation of the House of Windsor. I do think it reflects more of a sense of people within Barbados now think it's a little bit absurd to have your head of state determined by the circumstances of birth in a family which resides 4,000 miles away."

Hewitt, too, anticipates more countries may opt to break with the British monarchy but suggests that will happen after the reign of Elizabeth II comes to an end "simply because the Queen is held in such high regard."

"People would see it as almost a personal slight against her to do it now. But I feel that once the Crown passes, people will feel that it is time."