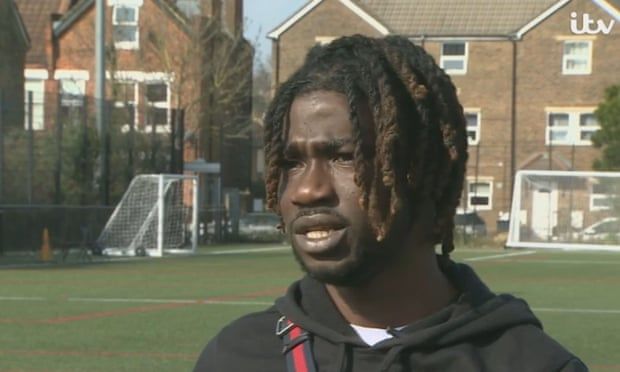 Eric Boateng-Taylor was stopped by officers in Croydon who demanded to know why he was wearing a jacket
A black entrepreneur was stopped and searched by police officers who said he was “not dressed for the climate” due to him wearing a coat in warm weather.

Eric Boateng-Taylor was on his way to work when he was stopped by Metropolitan police officers in Croydon, south London, who demanded to know why he was wearing a jacket.

Footage shared on TikTok, which has been viewed more than 400,000 times, showed one officer saying “you’re not dressed for the climate” and another adding that the man’s outfit “just seems odd”.

Boateng-Taylor was stopped for a search under the Misuse of Drugs Act.

As the 20-year-old filmed the incident on his phone, a male police officer can be heard telling him “I’m just wondering what you’re wearing”.

Boateng-Taylor responded “I’ll wear my own coat,” asking if the officers want to buy him a new one. “I’m asking what are you wearing,” the officer added.

When he told the officers that he wears what he wants, another officer asks again why he is wearing a coat and tells him “you’re not dressed for the warm weather”.

The local entrepreneur, who runs a car-washing business and has a drinks stand in Selhurst Sports Arena, was stopped in Dagnall Park on Wednesday.

Boateng-Taylor, who described the officers as “giggling like kids”, has asked for an apology from the force and also called on officers to be better trained.

He told ITV News: “They put me in handcuffs and were searching me”, adding the incident made him feel “violated”. Nothing was found during the search.

A statement from the Metropolitan police said the man was “wearing several layers of clothing despite the warm weather” and he “became hostile and refused to account for what he was doing” after being approached by officers from the violent crime taskforce.

DCS Lee Hill, of the violent crime taskforce, said: “We are aware of footage circulating on social media; this shows only a small part of this incident and we would ask people not to rush to judgment.

“In this instance a formal complaint has been received and is being handled in accordance with the Police Reform Act. This will include a review of all the available footage, including the officer’s body-worn video.

“Our officers have to conduct themselves in the most challenging of circumstances and it is right their actions should be subject to public scrutiny.”