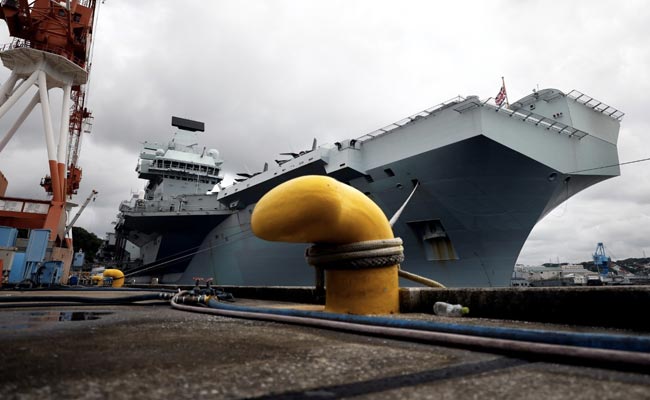 Both nations have voiced opposition to unilateral efforts to change the status quo in the disputed East China and South China seas and the importance of a free and open maritime order, Japan's Defence Minister said.
Britain's new HMS Queen Elizabeth aircraft carrier has paid a port call to Japan, in a mission that adds to pressure from Tokyo, the US and allies on China over its increasingly assertive regional maritime presence.

The Queen Elizabeth is the flagship of the UK's Carrier Strike Group deployment, which has been making stops around Japan and carrying out exercises along with vessels from allied nations in recent weeks.

"This port call to Japan by the British carrier strike group and the joint exercises represent the intent of our two nations," Japan's Defence Minister Nobuo Kishi said Monday at Yokosuka base, where the British ship is visiting.

"Japan-UK defence cooperation contributes not only to the security of our nations but also to the peace and stability of the Indo-Pacific and the international community, while also dealing with global issues," Kishi added.

Both nations have voiced opposition to unilateral efforts to change the status quo in the disputed East China and South China seas and the importance of a free and open maritime order, he said.

In a statement, the British embassy in Tokyo said the deployment was "a powerful demonstration of the UK's close and enduring partnership with Japan and the UK's commitment to maritime security in the Indo-Pacific region."

The massive carrier, weighing in at 65,000 tonnes, is the largest surface vessel ever built in the UK and is leading a group of six British ships and a submarine, one US destroyer and a Dutch frigate.

The group is billed as "the largest concentration of maritime and air power to leave the UK in a generation" and has already prompted a blunt warning from Chinese state media.

In July, an editorial in the nationalist state-run newspaper Global Times warned China might feel compelled to respond to the flotilla.

Addressing the UK and allied strike force specifically, it said: "We seriously warn this group: They are obliged to remain restrained and obey the rules."

It came as the group entered the disputed South China Sea after exercises with the navies of India, Malaysia and Singapore ahead of the Japan stops.

Britain's defence ministry said at the time that the deployment was "confident, but not confrontational."

Beijing's claims to the entire South China Sea encompass uninhabited islets that lie barely above the waterline, as well as man-made islands built to house airstrips and military bases.

The CSG21 is scheduled to visit 40 nations on a deployment that will see it cover over 26,000 nautical miles.