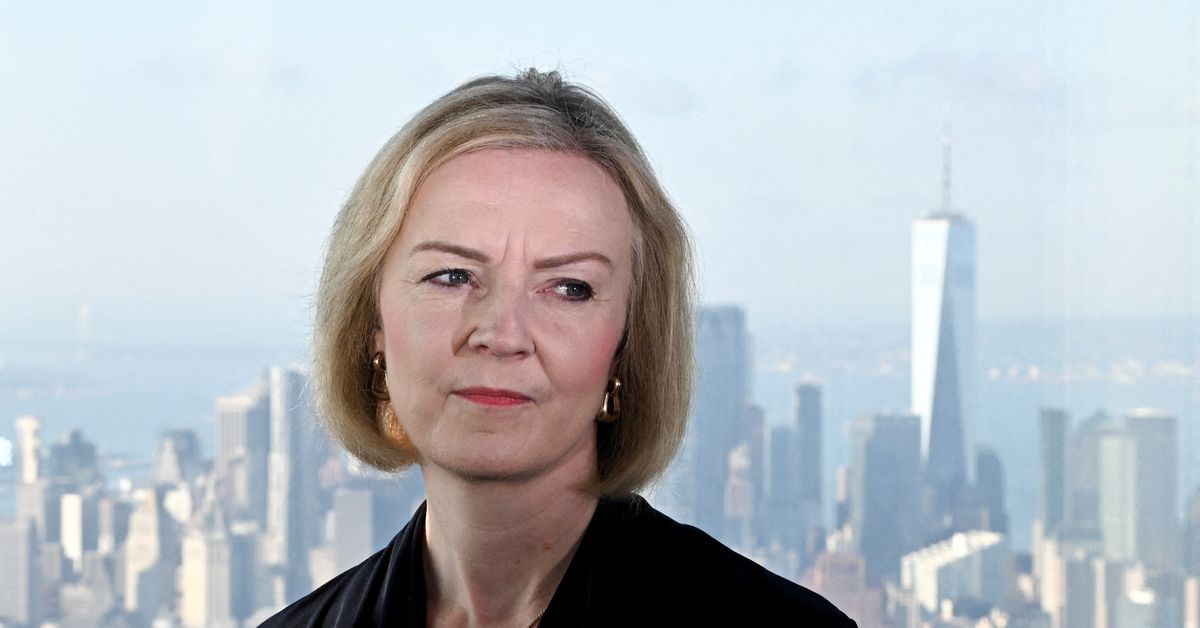 British Prime Minister Liz Truss warned of tough times ahead after she scrapped her vast tax-cutting plan and said she would carry on to try to put the economy on a stronger footing, defying calls for her resignation.

After weeks of blaming "global headwinds" for investors dumping the pound and government bonds, Truss on Monday said she was sorry for going "too far and too fast" with her radical economic plan to snap Britain out of years of tepid growth.

It was not clear whether the apology would quell a growing rebellion in her Conservative Party, with a handful of lawmakers urging Truss to quit just six weeks after she became prime minister.

Truss has said she will fight on and told her top ministers she wanted to level with the public that there were tough times ahead.

A new YouGov opinion poll showed that even among Conservative Party members who backed her for prime minister, more than half of those polled said she should resign. A third wanted her predecessor, Boris Johnson, to return.

Markets, which plunged after Truss's Sept. 23 "mini-budget", are still under strain even after her finance minister Jeremy Hunt tore up her plans on Monday.

"I do want to accept responsibility and say sorry for the mistakes that have been made," Truss told the BBC late on Monday.

"I wanted to act to help people with their energy bills, to deal with the issue of high taxes, but we went too far and too fast." Truss said she was "sticking around" and that she would lead the Conservatives into the next election due in about two years time, although the statement was accompanied by a laugh.

Earlier on Monday, Truss watched silently in parliament as Hunt ripped up the plan she proposed less than a month ago, and which triggered a bond market rout so deep that the Bank of England had to act to prevent pension funds from collapsing.

For some in the party, the sight of a prime minister humbled in parliament provided little confidence she could fight on.

James Heappey, a minister for the armed forces, said Truss, his boss, could not afford to make any more mistakes.

Truss spoke to her Brexit-supporting lawmakers on Tuesday, promising to resolve the contentious rules that govern trade with Northern Ireland and said she was still a low-tax conservative who would pursue such goals more slowly. One of those present said she was received warmly in contrast to more hostile receptions from other wings of the party.

Members of parliament have been urged by government to hold off from any move to oust her before it presents its medium-term fiscal plan on Oct. 31.

Truss was elected by Conservative party members, not the broader electorate, on a promise to slash taxes and regulation to fire up the economy in a policy dubbed by critics as a return to 1980s Thatcherite-style "trickle-down" economics.

But markets reacted so dramatically that borrowing costs surged, lenders pulled mortgage offers and pension funds fell into a tailspin.

Ryanair (RYA.I) boss Michael O'Leary described Britain's economic situation as a "car crash" which he blamed on the country's decision to vote to leave the European Union in 2016.

With Britain's economic reputation shattered, Hunt may now have to go further in finding public spending cuts than the government would have done had Truss not unleashed her economic plan at a time of surging inflation.

Truss's spokesperson said the government could not yet make commitments in individual policy areas, despite previous pledges, but it was focused on protecting the most vulnerable. He said Truss stood by her pledge to increase defence spending by 2030.

Torsten Bell, the head of the Resolution Foundation, a think tank, said the government may need to cut public spending by around 30 billion pounds ($34 billion) - a politically very difficult task after successive Conservative governments cut departmental budgets over the last 10 years.

One area of spending already to go is Truss's vast two-year energy support package that was expected to cost well over 100 billion pounds, which Hunt said would now last until April before it is reviewed.