Report commissioned by corrupted Queen’s representative had called for canceling the BVI constitution, canceling democracy, and recolonizing the territory, to be effectively governed by London. BVI people resist the crime against humanity that this recommendation means. 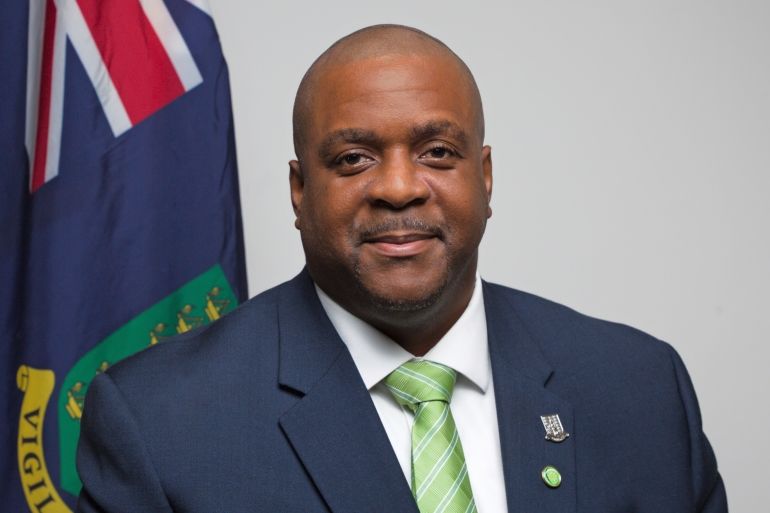 Hundreds of people have protested in the British Virgin Islands (BVI) against a proposal to put the overseas British territory under the direct control of the United Kingdom.

The rally on Monday came days after the BVI premier was arrested in the US city of Miami on drug-related charges.

A report released on Friday that was commissioned by Queen Elizabeth’s representative to the territory said the BVI should be effectively governed from London to “restore the standards of governance” that people there “are entitled to”.

A day earlier, BVI Premier Andrew Fahie and the territory’s director of ports were jailed following a sting operation by US authorities.

On Monday, activists gathered outside the office of Governor John Rankin in the capital, Road Town, on the island of Tortola, chanting slogans and holding signs that said “No UK rule”.

“Our message to the United Kingdom government and to the world: there will be no direct rule in this land,” said demonstrator Luce Hodge-Smith.

The rally coincided with a visit by Amanda Milling, a British Minister of State for Asia and the Middle East, to discuss the findings of the report.

“Yesterday I arrived in the BVI following the publication of the Commission of Inquiry,” Milling wrote on Twitter on Monday.

“I look forward to engaging with a range of people [including] BVI leaders, opposition, community groups and sector experts to listen to views on what is in the best interests of the people of BVI.”

The BVI, a self-governing Caribbean archipelago, is home to approximately 35,000 people and is an overseas territory of the UK, which supervises its defence and foreign policy.

It is also one of the world’s leading offshore tax havens. Both the local government and London have been accused by anti-corruption campaigners of turning a blind eye to the illicit flows of foreign money through the territory.

“Unless the most urgent and drastic steps are taken, the current unhappy situation – with elected officials deliberately ignoring the tenets of good governance giving rise to an environment in which the risks of dishonesty in relation to public decision making and funding continue unabated, and the consequences of allowing such an environment to flourish – will go on indefinitely,” it said (PDF).

The document was commissioned in early 2021, but its release coincided with Fahie’s arrest.

US officers at Miami-Opa-locka Executive Airport took Fahie and Oleanvine Maynard, director of the territory’s Ports Authority, into custody on Thursday after they allegedly agreed to accept money from undercover agents posing as Mexican drug traffickers, the Miami Herald newspaper reported.

The US Justice Department said it charged Fahie, Maynard and his son with “cocaine trafficking and money laundering conspiracies for agreeing to facilitate the safe passage through BVI ports of tons of Colombian cocaine headed to Miami”.

In a court filing on Monday, Fahie’s lawyer claimed that he enjoys immunity from prosecution in the US as the constitutional head of government of the British overseas territory.

The premier’s arrest follows the extradition of former Honduran President Juan Orlando Hernandez to the US, where he is facing drug trafficking charges.