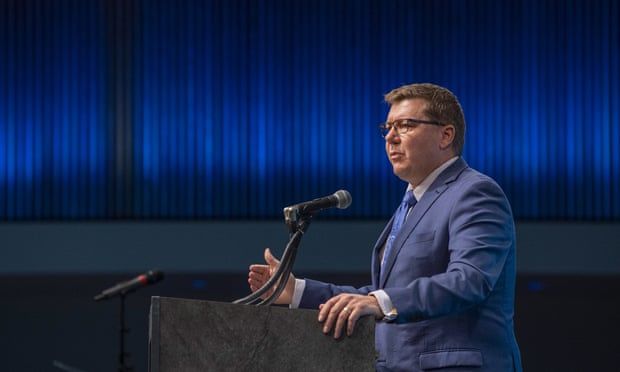 Saskatchewan premier Scott Moe said he tested positive even as region resumes events, hockey games and in-person learning
A day after dismissing the need for more restrictive measures to combat the coronavirus, the premier in the Canadian province of Saskatchewan has tested positive for Covid-19.

“I’m feeling fine, but will be self-isolating and working from home for the next five days,” wrote Scott Moe on Twitter, alongside an image of a positive antigen test.

The news came just a day after the province announced it has no plans to restrict gatherings even while the highly-transmissible Omicron variant continues its rapid spread.

“I don’t know that those are working in any other province across Canada,” Moe told reporters. “We’re seeing numbers continuing to spread in areas that have restrictions in place that go far beyond gathering limits.”

Unlike in many other provinces, larger events like conferences and hockey tournaments are still permitted in Saskatchewan, which is also the only region not to delay the return to in-person learning.

Moe’s office said his last negative test result was Sunday night. The premier has since attended a number of events and was photographed with his mask hanging under his chin. He also repeatedly took his mask off to answer questions during Wednesday’s press conference. Dr Saqib Shahab, the province’s chief medical health officer who was seated beside Moe at the press conference, remained masked at all times.

Shahab had previously warned that residents should refrain from gathering and socializing indoors.

“One single ill-planned and not recommended event can result in thousands of cases, which once they impact people who are unvaccinated, older, frail, immunocompromised will lead to hospitalizations,” he said.

But provinces with conservative governments, like Saskatchewan, have been wary of imposing new lockdown restrictions, instead ramping up rapid testing.

Most other provinces have taken steps to limit the spread of Omicron as it overwhelms healthcare systems. British Columbia has limited sports events, Ontario has shut down bars and indoor dining and Quebec has implemented an evening curfew. Quebec has also announced plans to tax residents who choose to remain unvaccinated.

But even in highly vaccinated regions of the country, the healthcare system has been put under extreme pressure. On Wednesday, Canada’s average weekly hospitalization reached 6,704, the highest in the pandemic.
#Coronavirus  #COVID-19  #Covid