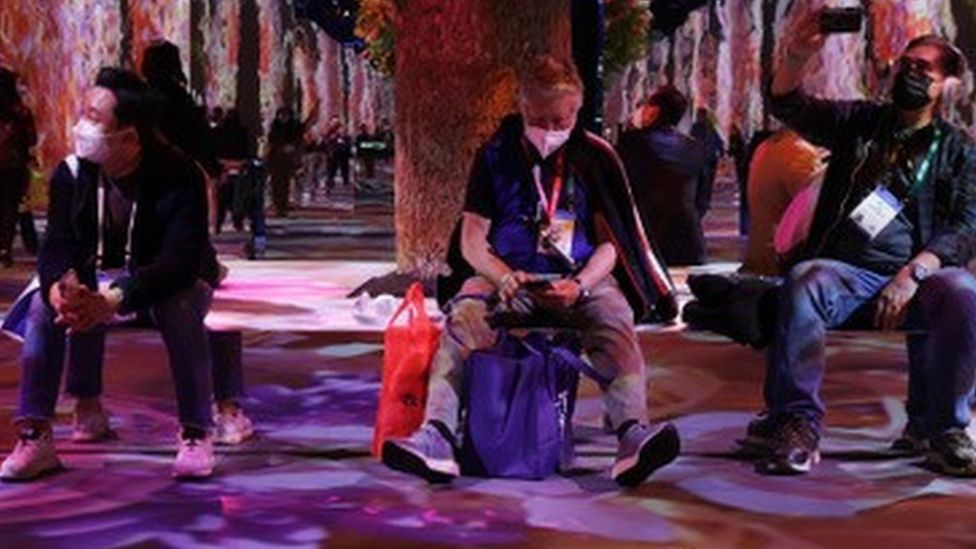 One of the tech calendar's biggest annual events, CES, has been taking place in Las Vegas this week.

The pandemic and fears over the spread of the Omicron variant meant numbers of attendees were down and some of the largest firms, including Meta, Google and Amazon, pulled out.

But there was still plenty of weird and wonderful technology on show.

Here's a look at some of the trends and more outlandish offerings from the show floor. 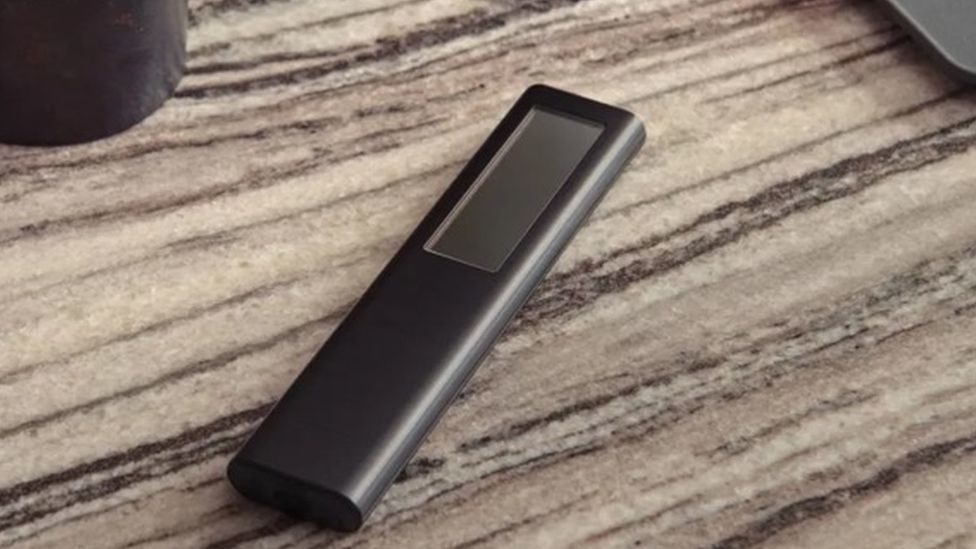 TVs have always been a big draw at CES - with the emphasis on big, as every year they seem to gain more inches.

But this year it was a much smaller accessory - the TV remote control - that was garnering the headlines.

In 2021, Samsung added a solar panel to the back of its remote so that it could charge from the sun while sitting on the arm of a chair.

This year, it has come up with a new way to kill off the AAA battery market.

Its new version has a tiny antennae that can harvest radio frequency signals emitted by wi-fi routers from a distance of up to 40m (131ft), allowing it to charge even when the sun isn't shining.

Samsung said that the device will be included with new TVs and other home appliances, although not much detail was given on the technical specifications. 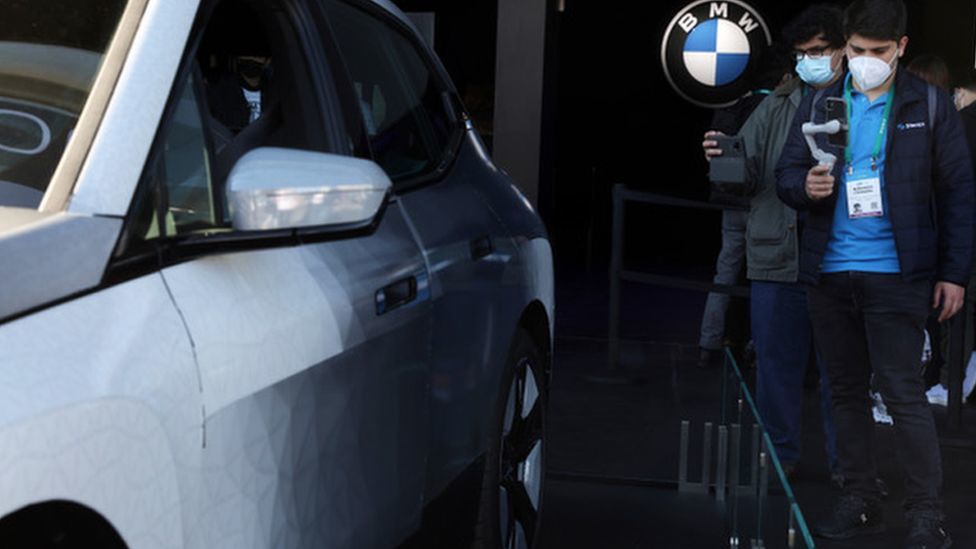 The colour changes were subtle but attracted lots of interest

If you have ever grown bored with the colour of your car, then you might like BMW's idea - to change it on a whim.

It showed off how a car's exterior could effectively become ePaper which, when charged with a small electric current, changes colour or creates a pattern.

Its "iX Flow" technology is similar to that which powers e-book readers and covers the car in millions of tiny microcapsules.

The project is very much concept-only at this stage, but is intended to be more than cosmetic - changing to a light colour in hot weather or a dark colour in cooler weather will cut the amount of cooling and heating required inside the vehicle, the firm said.

But some critics pointed out that the system looked to be temperature-sensitive while others questioned the colour choice - currently only available in white, black and grey. 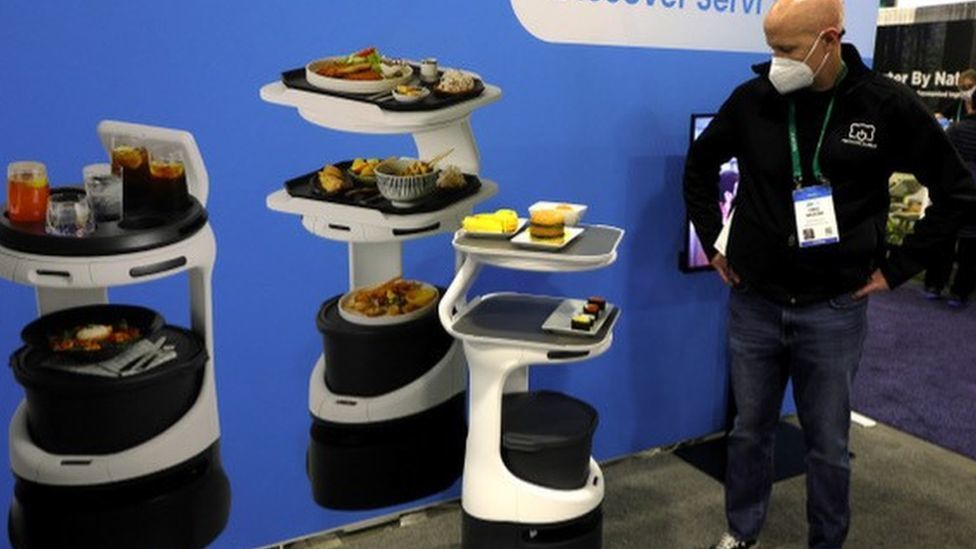 Past CES conferences have seen a parade of human-looking robots, ranging from the ultra-cute to the extremely creepy, and while some of these were still on show, it seems 2022 might usher in an era of the more practical bot.

The Servi one from Bear Robotics looked particularly enticing as it wafted around a booth with burgers and sushi on trays, offering to take the place of human waiters.

A fetching robot was also flavour of the week with Labrador Systems, which showed off its Retriever bot.

Chief executive Mike Dooley said it would be of great use for people "when pain or other health issues" meant that they cannot be as mobile as they would like.

The wheeled robot guides itself through a home using sensors. Users communicate with it via voice control or an app.

It can carry about 25lbs (11kg) and has two shelves which can move up and down to reach different heights.

The robot is currently being tested, with the aim of going into production in 2023. 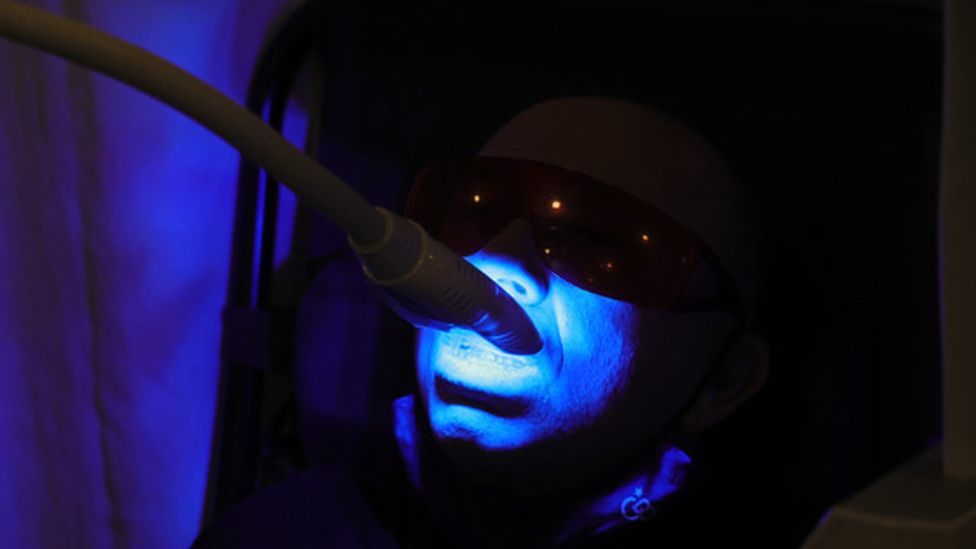 On show was a machine that uses a high-intensity blue light to whiten teeth in 25 minutes.

The beauty industry has long looked to technology to improve its offerings, and CES has become home to much that is cutting-edge in the cosmetic industry.

This year, the Sound Mirror from Icon.AI won an innovation award. It looks like a conventional mirror, but conceals a voice-activated smart speaker that can play music, let you check the weather, set alarms or control other smart devices. 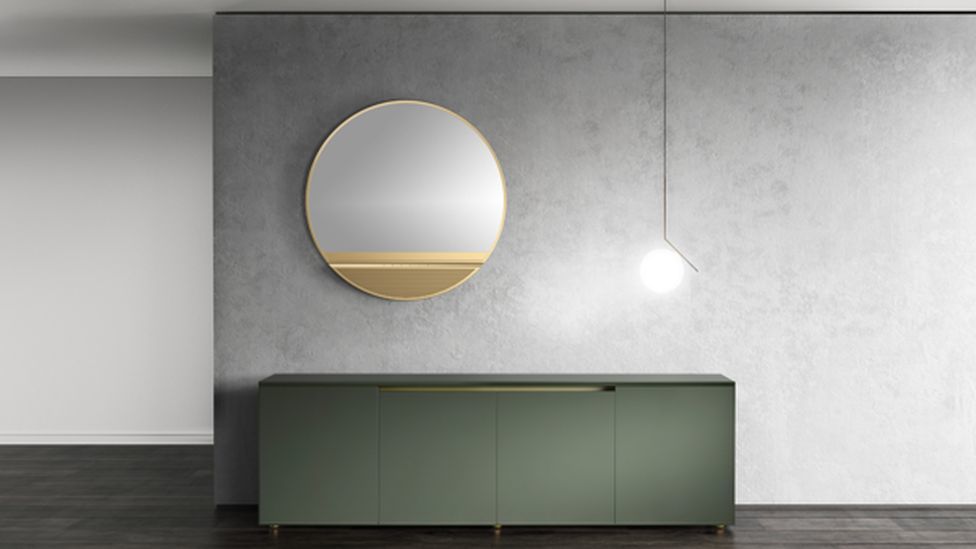 Mirror, mirror on the wall: a mirror you can talk to - but will you like the answer?

Meanwhile L'Oreal revealed an at-home hair dye device, while Ninu introduced a smart perfume that can create a personalised fragrance when connected to a smartphone app.

Its hi-tech bottle claims to be able to provide 100 different fragrances, depending on mood, weather or the occasion. It is due to start shipping in June.

And the Y-Brush, an unusual jaw-shaped electric toothbrush which claims to brush teeth in just 10 seconds, and debuted at CES in 2017, was back this year with an improved design. That including an easier-to-hold handle and more modes, such as teeth whitening and gum care. 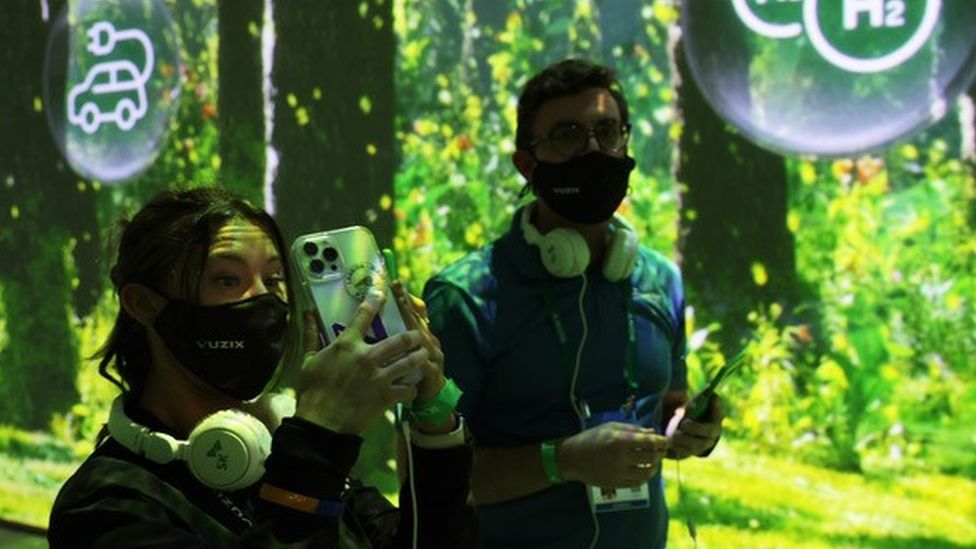 With coronavirus still posing a threat to real-life events, some firms chose to go entirely virtual, while others aimed to combine their physical presence with the much-hyped idea of the metaverse - a digital world that some believe we will work, learn and play in, in the future.

Samsung offered a "metaverse booth" which allowed users to experience some of its products while decorating their own home.

Procter and Gamble also opted for a "metaverse" experience. Partnering with London's Royal Botanic Gardens, users could wander the virtual grounds and learn about ingredients and the company sustainability initiatives - plus chat to representatives from brands such as Gillette and Oral-B (just make sure your avatar has perfect white teeth).

And South Korea-based SK Group offered visitors a 360-degree video presentation, merging the physical and the digital in its Green Forest Pavilion, which showcased its plans for global carbon reduction.