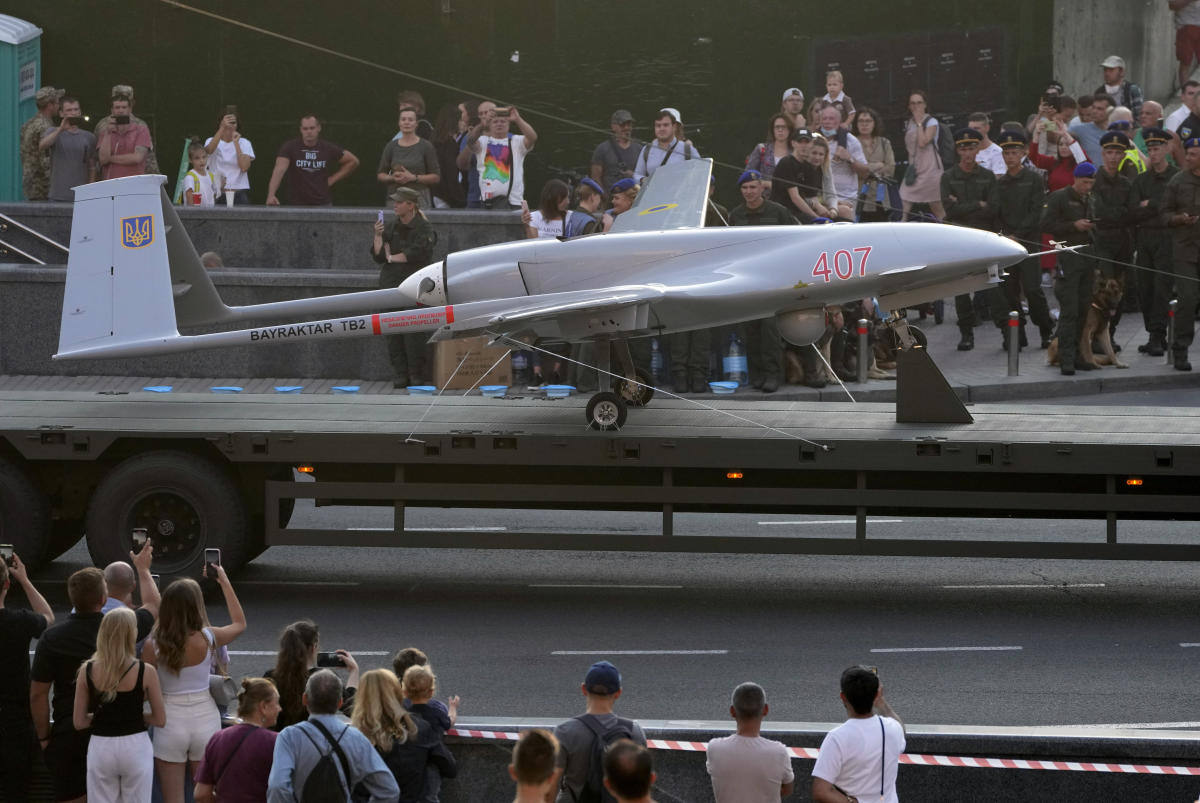 Despite three weeks of Russian bombardment, Ukraine has kept up a stiff defense of its cities by using Turkish-made drones to carry out pop-up attacks on the invaders with a lethal effectiveness that has surprised Western military experts.
The Bayraktar TB2 unmanned aerial vehicles, which carry lightweight, laser-guided bombs, normally excel in low-tech conflicts, and Turkey has sold them to more than a dozen countries, including Azerbaijan, Libya, Morocco and Ethiopia.

The drones have carried out unexpectedly successful attacks in the early stages of Ukraine's conflict with Moscow, before the Russians were able to set up their air defenses in the battlefield, said Jack Watling of the London-based Royal United Services Institute.

“The (TB2s) shouldn’t be making a meaningful impact because they are medium altitude, slow-flying aircraft with a large electromagnetic signature and a large radar cross-section. And the Russians have very capable air defense systems, so they should be being shot down. The terrain is very open and gives good radar coverage,” Watling added.

He said Ukrainian forces "have been essentially flying in at a low-level and then coming up and raiding with them. So striking targets of opportunity.”

Over time, as the Russians get more organized and push out their air defenses, Watling said “the freedom to employ those drones is diminishing. And so what we are now seeing is that the Ukrainians are having to be careful as to when they commit them.”

In a briefing to Parliament on March 9, British Defense Minister Ben Wallace praised the drones, along with other weapons donated to Ukraine by the West.

“One of the ways they are delivering close air support or actual fire in depth is through the Turkish TB2 UAVs, which are delivering munitions onto their artillery and indeed their supply lines, which are incredibly important in order to slow down or block the Russian advance,” Wallace said.

The drones also have scored success on social media. Their aerial video of the destruction of Russian armored vehicles has become a key tool for Ukraine's information war.

Vasyl Bodnar, Ukraine’s ambassador to Turkey, shared videos of drone attacks on Twitter, including one that appeared to show a convoy of destroyed Russian military vehicles.

“Masallah” or “Praise be” he wrote in a caption on one of the videos.

A video using a song titled “Bayraktar” ‒ with sounds of explosions timed to coincide with the beats ‒ has been uploaded on YouTube and played on Ukrainian radio.

“So as long as they still fly in, as long as they’re still armed, they will be useful. They will mostly be useful for the propaganda side,” said Aaron Stein, director of research at the U.S.-based Foreign Policy Research Institute. “The videos have enraptured people because you can see an airstrike in high definition.”

Turkey began selling the TB2 drones to Ukraine in 2019, and Kyiv used them in fighting Russian-backed separatists in the eastern Donbas region — a move that Moscow called “destabilizing.”

Turkish officials have refused to disclose details of the drone sales to Ukraine, including how many were involved and whether Kyiv is being resupplied. Independent estimates put the number of TB2s in Ukraine at between 20 and 50. “I think Turkey’s actually in the front, but not at the center, at least not publicly, of this conflict,” said Soner Cagaptay, director of the Turkish Research Program and senior fellow at the Washington Institute for Near East Policy in Washington D.C. “Its official policy regarding the war is what I would call ‘pro-Ukraine neutrality.’ It acts neutral. It wants the war to end, but it is militarily helping Ukraine. ... It has been selling these killer drones to Ukraine that are apparently doing an amazing job.” The drones ‒ priced under $2 million each according to estimates ‒ are produced by the Baykar defense company, which belongs to the family of Selcuk Bayraktar, the son-in-law of Turkish President Recep Tayyip Erdogan. Bayraktar is Baykar’s chief technical officer.

The TB2 has been credited with helping tip the balance of conflicts in Libya, as well as to Turkey's ally Azerbaijan in fighting with Armenian-backed forces in the disputed Nagorno-Karabakh region in 2020.

Such less-expensive drones are likely to have a lasting impact on warfare as a useful tool of attrition, as well as being able to draw in the attention of more expensive enemy jets, Stein said.

“I’d call it the Toyota Corolla of drones. ... It doesn’t do everything that your high-end sports car does, but it does 80% of that, right?” he said. “So even for a high-end military, like the U.S., the basic concept of using in an attritable, cheap platform to strike a superior force has inherent value.”

An unspecified number of U.S.-made drones will be among the additional $800 million in military assistance to Ukraine announced Wednesday by President Joe Biden. It also includes 800 Stinger anti-aircraft systems, 100 grenade launchers, 20 million rounds of small arms ammunition, and grenade launchers and mortar rounds.

The White House has been weighing giving Ukraine access to U.S.-made Switchblade drones that can fly and strike Russian targets, according to a person familiar with the matter who was not authorized to speak publicly. It was not immediately clear if the new drones that Biden said would be delivered to Ukraine include those or others.
#Joe Biden