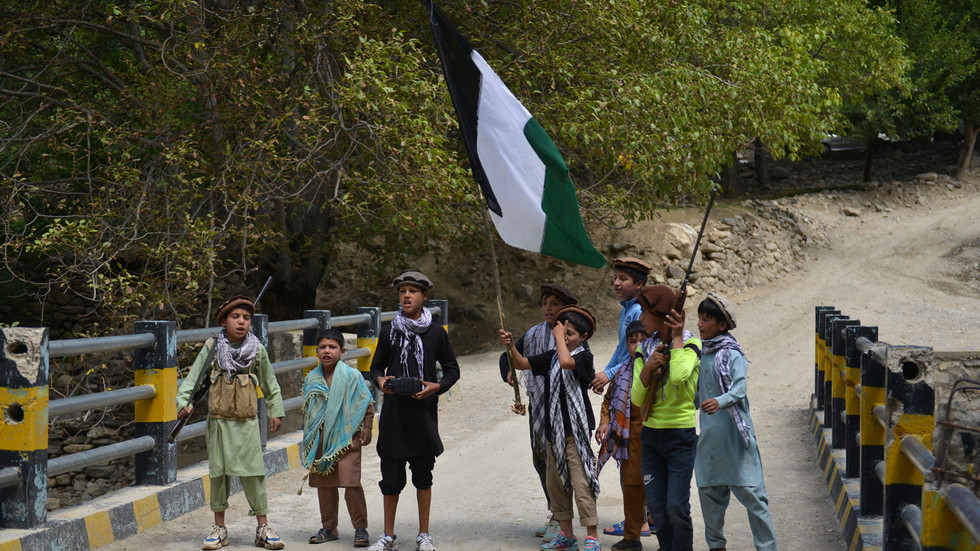 Paris-based news agency AFP has been accused of romanticizing child soldiers after photographing an Afghan children’s ‘militia’ in Panjshir province, where locals have taken up arms against the Taliban.

The outlet, known for its photojournalism, apparently took an interest in a group of kids who wanted to show their martial spirit amid a tense standoff with the Taliban.

“Afghan children carry rifles and a Panjshir National Resistance Front flag along a road in the Dara district of Panjshir province,” AFP tweeted on Monday, adding that “thousands of people” have come to the province to “find safety” and join the resistance against the Taliban.

The photographs show around 10 children marching down the road and standing guard at a bridge as they waved the green, white and black flag of the National Resistance Front (NRF). Two of the youngsters were armed with “rifles.”

The photos coincide with an uptick in western media reports detailing how Panjshir has become a rallying point for Afghanistan’s anti-Taliban resistance.

But if the photos were intended to elicit sympathy for NRF’s cause, it appears AFP’s plan backfired.

Numerous Twitter users alleged that the outlet was promoting the use of child soldiers, which is typically at least frowned-upon.

Others accused AFP of staging the questionable photographs.

There were even questions about the “rifles” being used by the pre-teen militia, with social media users expressing a high degree of certainty that the weapons were old air guns.

Lying some 150 kilometers (93 miles) north of Kabul, the Panjshir Valley is currently under the control of warlord Ahmad Massoud, whose NRF is a re-branding of the National United Front (Northern Alliance) led by his father, Ahmad Shah Massoud. Ousted vice president Amrullah Saleh and former defense minister Bismillah Mohammadi have taken refuge in the valley, along with soldiers of the Afghan National Army.

The Taliban has demanded NRF’s immediate surrender, but Massoud is reportedly unwilling to capitulate and instead seeks to negotiate a “comprehensive government” for Afghanistan in which the Taliban shares power.