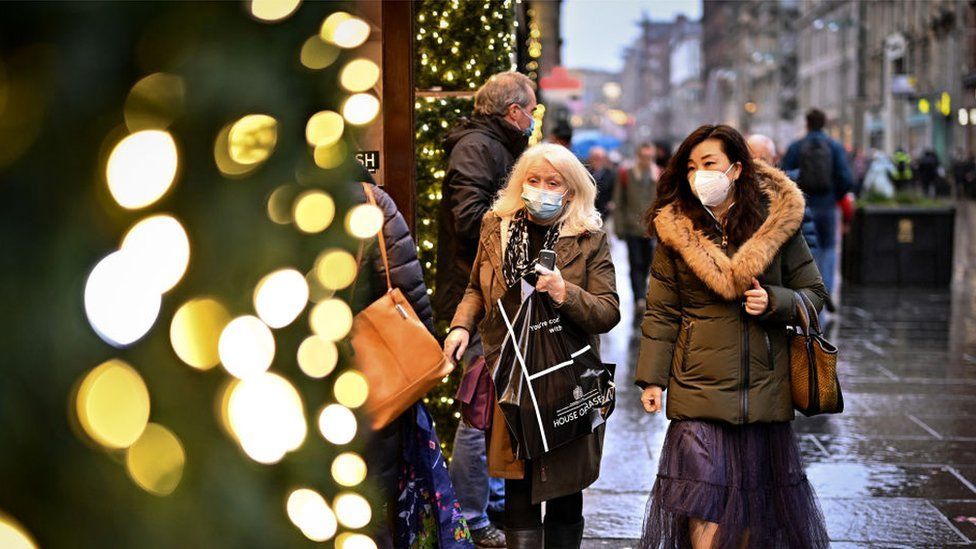 Christmas Day guidance in Scotland 'will not change'

People have been advised to reduce their contacts as much as possible in the coming days, but have not been asked to cancel Christmas plans.

And Ms Sturgeon said guidance for individuals would not change despite ongoing concerns about Covid-19.

Prime Minister Boris Johnson has also ruled out immediate changes to regulations for people in England.

However, he said data would be "under review hour-by-hour", and that the UK government would not hesitate to "take further action" to protect public health.

Concerns about the faster-spreading Omicron variant of Covid-19 - now the dominant strain of the virus in Scotland - have raised speculation about new restrictions on people and businesses in the days running up to Christmas.

Scotland recorded more than 6,700 new infections on Monday, with the percentage of tests coming back positive at its highest level since January, at 15.2%.

Asked if people could plan their Christmas Day celebrations on the basis of advice already given, Ms Sturgeon told BBC Scotland: "Yes."

The first minister said she wanted "people to have clarity about what we are expecting of them", and that they should "listen carefully to advice".

The government has asked people to reduce their contact with other households as much as possible and to stay home "as much as is feasible" on the days around Christmas, but that they can go ahead with their main family celebrations.

The Scottish cabinet will meet on Tuesday morning, before Ms Sturgeon updates MSPs on the latest data and plans in the afternoon.

The Scottish government has already enacted some new guidelines for hospitality businesses and shops, and Ms Sturgeon said ministers would be looking at whether anything else could be done on that front.

She said: "Cabinet tomorrow will look at the data and we will consider - we haven't taken any decisions - whether there are any other steps we need to take, both to slow down the spread of infection and to take account of the fact that because of the rising number of infections we are seeing quite high staff absences across the economy and in public services.

"All of this has to be balanced and we will come to balanced decisions tomorrow.

And if we are deciding to do anything else - as I say I am not changing the advice for individuals around Christmas - I will set that out to parliament tomorrow."

Ms Sturgeon was speaking moments after Mr Johnson confirmed no immediate changes will be made to rules in England.

Speaking after a two-hour cabinet meeting, the prime minister said there were still "some things that we need to be clearer about before we decide to go further".

He said ministers were "looking at all kinds of things" and would "rule nothing out" in terms of future action.

Mr Johnson added: "Unfortunately I must say to people that we will have to reserve the possibility of taking further action to protect the public, to protect public health, to protect our NHS."