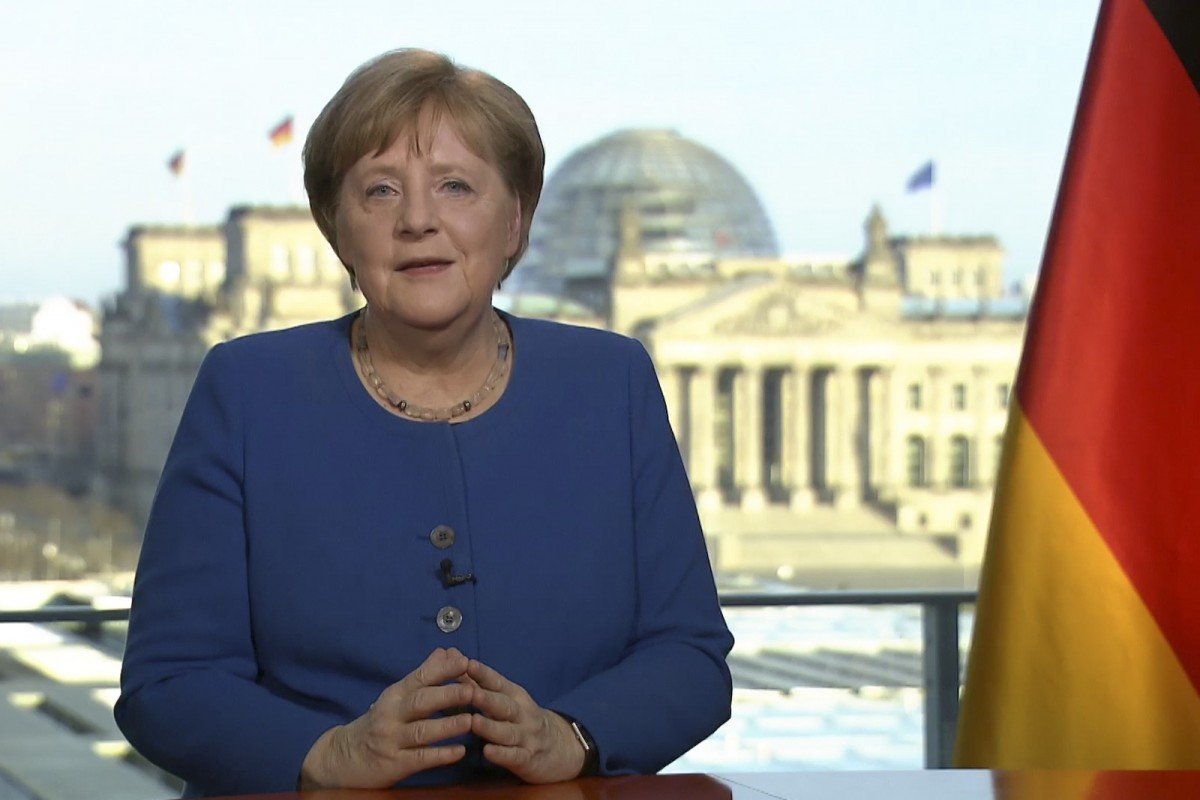 As cases in Europe outstrip those in China, chancellor makes rare television speech to urge citizens to abide by restrictions to contain pandemic’s spread. Germany could have up to 10 million infections in two to three months if residents don’t follow recommendations, health officials say

“This is serious – and you need to take it seriously,” Merkel said the speech delivered to the nation on Wednesday evening. “There has been no such challenge to our country since German reunification – no, since World War II – that relies so much on our joint action in solidarity.”

As the number of confirmed infections in Europe surpass those in China, Merkel addressed the public directly to warn them that they’ll have to make sacrifices to slow the spread of the sickness.

Dispensing with statistics and jargon, Merkel kept her plea to the basics: stay home, wash hands, keep at a distance – and refrain from contacting vulnerable groups such as the elderly.

The guiding principle for all action was to slow rather than stop the infectious pathogen, winning time so as to prevent hospitals and intensive care units from being overwhelmed by those needing help.

Europe’s largest economy has already felt the impact with closed cafes and restaurants as well as idled plants. The looming impacts have prompted Merkel’s government to prepare to abandon its long-held principle of maintaining balanced budgets.
“The next few weeks will become more difficult,” Merkel said, reiterating her pledge to do everything in the government’s power to stem the impact from the pandemic.

As part of the efforts to handle the crisis, Germany is working to double hospital intensive-care capacity, according to plans circulated on Wednesday.

Less severely-ill patients might be treated in hotels or other large facilities, the plan suggested. It called on clinics to search their “cellars” for old equipment – including beds and ventilators – that could be repurposed in a pinch.

Germany could have up to 10 million coronavirus infections in two to three months if residents do not follow the social distancing recommendations in place now, according to the Robert Koch Institute, the country’s public health authority.

“We have exponential growth,” President Lothar Wieler said at a press conference on Wednesday, adding the effectiveness of the current restrictions will only become clear in two weeks. “We are at the beginning of an epidemic that will be on the move in our country for many weeks and months.”

Germany’s leader, who initially faced criticism for not weighing in publicly in the first weeks of the epidemic, has been a daily presence since last week. She reprimanded those hoarding supplies in supermarkets, saying that food supplies in Germany will be secure.

Even as Merkel prepares to step down after elections next year and faces challenges to her authority, she remains Germany’s most popular politician, thanks to a sober demeanour and a steady hand in crisis.

With an emotional touch, she offered advice for those sitting at home seeking social contact, suggesting they Skype, create a podcast for loved ones, or even write a letter, vowing that postal delivery and other basic services will continue.

The federal government, in negotiation with the country’s 16 states, has ordered the closure of schools, bars, clubs and gyms, while stopping short of the full lockdown now adopted in Italy and France.

But Merkel signalled that her administration would remain open to further measures, as many people still flock to parks and cafes to enjoy the early spring weather.

In justifying travel restrictions, Merkel invoked her personal history growing up in the former communist east, saying limiting the freedom of movement wasn’t something she takes lightly.

“This is a historic task and can only be accomplished together,” Merkel said. “This situation is serious, and the outcome is open.”