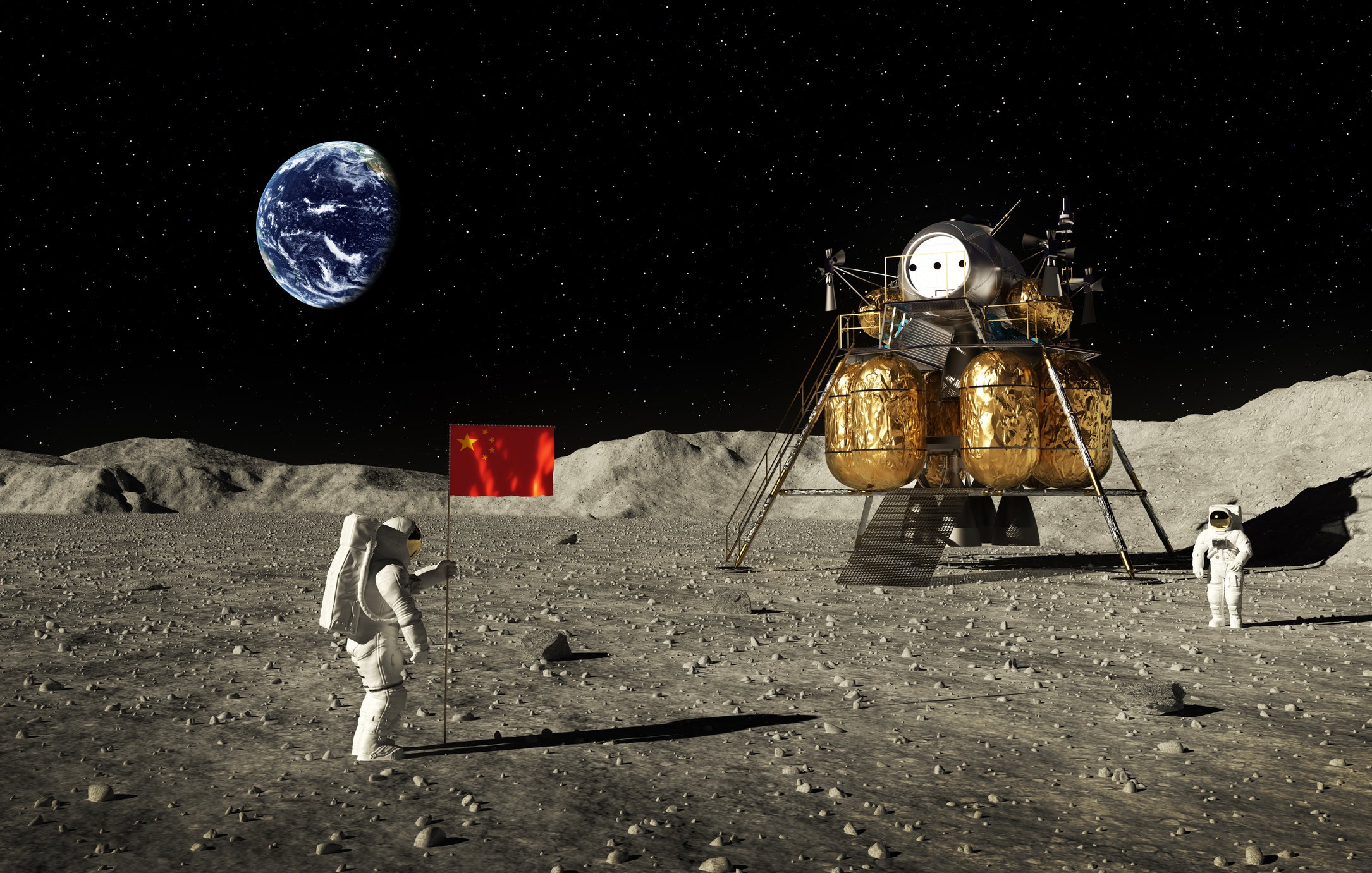 Could Chinese Astronauts Beat NASA Back to the Moon?

Just the possibility could be enough to guarantee lots of money for American space firms for years to come.

NASA wants to return mankind to the moon by 2024. To do so, it'll need help from its "Space Launch System" (or SLS) contractors Boeing and Northrop Grumman, Aerojet Rocketdyne, and especially Lockheed Martin, which is building the Orion space capsule. Blue Origin and SpaceX - two companies that are sometimes NASA partners, sometimes NASA rivals - want to put boots on the lunar ground as well.

And now comes a third entrant into this latest space race to get back to the moon: China.


As Space.com reported earlier this month, China is actively working to develop its own "next-generation" spacecraft for human spaceflight between worlds.

Following in the footsteps of the Soviet Union (and later Russia) and the United States, China became the third terrestrial nation to put astronauts in space when "taikonaut" Yang Liwei orbited Earth in Shenzou-5 in 2003. Now the state-owned China Academy of Space Technology (CAST) is building an even bigger 30-foot long, 22-ton yet-to-be-named spacecraft capable of carrying anywhere from four to six taikonauts on a voyage to the moon.

As Space.com reports, China plans to launch its new spacecraft on an unmanned test flight sometime in the first half of next year, flying atop a Long March 5B heavy-lift rocket. China says that to get the spacecraft the rest of the way to its destination, it first needs to develop a more powerful rocket -- the super-heavy-lift "Long March 9." For this reason, the country is targeting a crewed mission to the moon only sometime "in the 2030s" (although some Chinese sources have suggested earlier dates).

A successful unmanned test flight next year could theoretically lay the foundation for a manned flight later in the year. So while for now China publicly disclaims an interest in landing taikonauts on the moon in the next decade, there's at least a chance China could accomplish this before NASA can reach the moon with its "Project Artemis" (which is targeting a 2024 date for moon landing).

What it means to investors


Whatever China's ultimate target date turns out to be, its race to the moon puts pressure on NASA. The more delays our own Artemis program encounters, the greater the chances that China will get there first. So simply knowing that China is in this race is going to serve as an incentive to NASA to keep running.

What does this mean for investors?


NASA is spending some $35 billion to develop its Space Launch System for Project Artemis. The space agency awarded a $2.7 billion contract to buy three Orion spacecraft for the project just last month. Criticism of the program's cost overruns and development delays, however, have sparked calls for SLS's cancelation in Congress - especially in light of suggestions that SpaceX's new "Starship" could make the moon trip cheaper.

And yet the Starship hasn't flown an orbital test flight yet, much less a trial run to the moon and back. (Neither has SLS - it hasn't even been assembled yet!) Although Elon Musk is promising to send the Starship on an orbital test flight as early as the end of this year, so long as NASA is working with two "unknown quantities," and facing a determined rival in China, it's unlikely to cut bait on SLS before at least one of these rocket concepts has proven itself capable of executing the moon mission.

In this scenario, Congress, too, may feel compelled to spend whatever it takes to ensure Project Artemis's success. And that means that for the foreseeable future - through the end of this year certainly, to 2024 probably, and potentially all the way toward "the 2030s" - billions of dollars of planned and anticipated spending on a return to the moon will continue to flow out of NASA and into the pockets of investors in companies like Boeing, Northrop, Aerojet, and Lockheed.

Earning robust profit margins ranging from 10% for Boeing and Lockheed, to 11% for Northrop, to nearly 15% for Aerojet (according to data from S&P Global Market Intelligence), this is still a great business to be in. And if SpaceX and Blue Origin ever get around to having IPOs, they could become similarly great businesses to own.


I don't know about you, but I always pay attention when one of the best growth investors in the world gives me a stock tip. Motley Fool co-founder David Gardner and his brother, Motley Fool CEO Tom Gardner, just revealed two brand new stock recommendations. Together, they've quadrupled the stock market's return over the last 17 years.* And while timing isn't everything, the history of Tom and David's stock picks shows that it pays to get in early on their ideas.