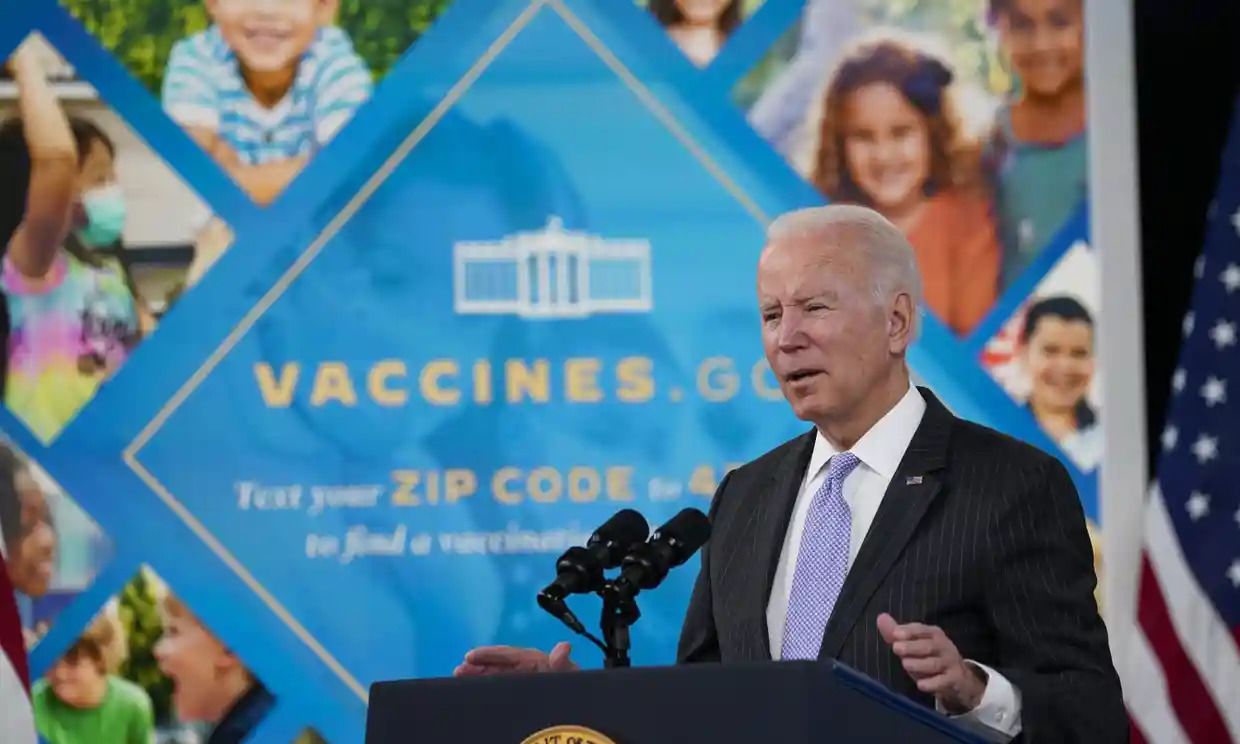 Decision reverses previous ruling but Republican officials say they will appeal measure to supreme court
A federal appeals court panel has allowed Joe Biden’s Covid-19 vaccine mandate for larger private employers to move ahead, reversing a previous decision on a requirement that could affect some 84 million US workers.

The 2-1 decision by a panel of the 6th US circuit court of appeals in Cincinnati overrules a decision by a federal judge in a separate court that had paused the mandate nationwide.

The mandate from the US Occupational Safety and Health Administration (Osha) was to take effect on 4 January. With Friday’s ruling, it’s not clear when the requirement might be put in place, but the White House said in a statement that it will protect workers: “Especially as the US faces the highly transmissible Omicron variant, it’s critical we move forward with vaccination requirements and protections for workers with the urgency needed in this moment.”

Republican state attorneys general and conservative groups said they would appeal Friday’s decision to the US supreme court.

Twenty-seven Republican-led states joined with conservative groups, business associations and some individual businesses to push back against the requirement as soon as Osha published the rules in early November. They argued the agency was not authorized to make the emergency rule, in part because the coronavirus is a general health risk and not one faced only by employees at work.

“Given Osha’s clear and exercised authority to regulate viruses, Osha necessarily has the authority to regulate infectious diseases that are not unique to the workplace,” Judge Julia Smith Gibbons, who was nominated to the court by George W Bush, a Republican, wrote in her majority opinion.

“Vaccination and medical examinations are both tools that Osha historically employed to contain illness in the workplace,” she wrote.

Gibbons noted that the agency’s authority extended beyond just regulating “hard hats and safety goggles”. She said the vaccine requirement “is not a novel expansion of Osha’s power; it is an existing application of authority to a novel and dangerous worldwide pandemic”.

She was joined in the majority decision by Judge Jane Branstetter Stranch, an appointee of Barack Obama.

The case was consolidated in the 6th circuit, which is dominated by Republican-appointed judges. Earlier this week, the circuit’s active judges rejected a move to have the entire panel consider the case, on an 8-8 vote.

The dissent in Friday’s ruling came from Judge Joan Larsen, an appointee of Donald Trump, who said Congress did not authorize Osha to make this sort of rule and that it did not qualify as a necessity to use the emergency procedures the agency followed to put it in place.

The vaccine requirement would apply to companies with 100 or more employees and would cover about 84 million workers in the US. Employees who are not fully vaccinated would have to wear face masks and be subject to weekly Covid-19 tests. There would be exceptions, including for those who work outdoors or only at home.

The administration has estimated that the rule would save 6,500 lives and prevent 250,000 hospitalizations over six months. On Friday, the US Department of Labor, which includes Osha, said the 6th circuit’s ruling will allow the agency to implement “commonsense, science-based measures to keep workers safe and healthy during a deadly pandemic”.

As we approach the end of the year in Thailand, we have a small favour to ask. We’d like to thank you for putting your trust in our journalism this year - and invite you to join the million-plus people in 180 countries who have recently taken the step to support us financially, keeping us open to all, and fiercely independent.

The new year, like all new years, will hopefully herald a fresh sense of cautious optimism, and there is certainly much for us to focus on in 2022 - a volley of elections, myriad economic challenges, the next round in the struggle against the pandemic and a World Cup.

With no shareholders or billionaire owner, we can set our own agenda and provide trustworthy journalism that’s free from commercial and political influence, offering a counterweight to the spread of misinformation. When it’s never mattered more, we can investigate and challenge without fear or favour.

Unlike many other media organisations, Guardian journalism is available for everyone to read, regardless of what they can afford to pay. We do this because we believe in information equality. Greater numbers of people can keep track of global events, understand their impact on people and communities, and become inspired to take meaningful action.
#Donald Trump  #Coronavirus  #Joe Biden  #COVID-19  #vaccine  #Covid