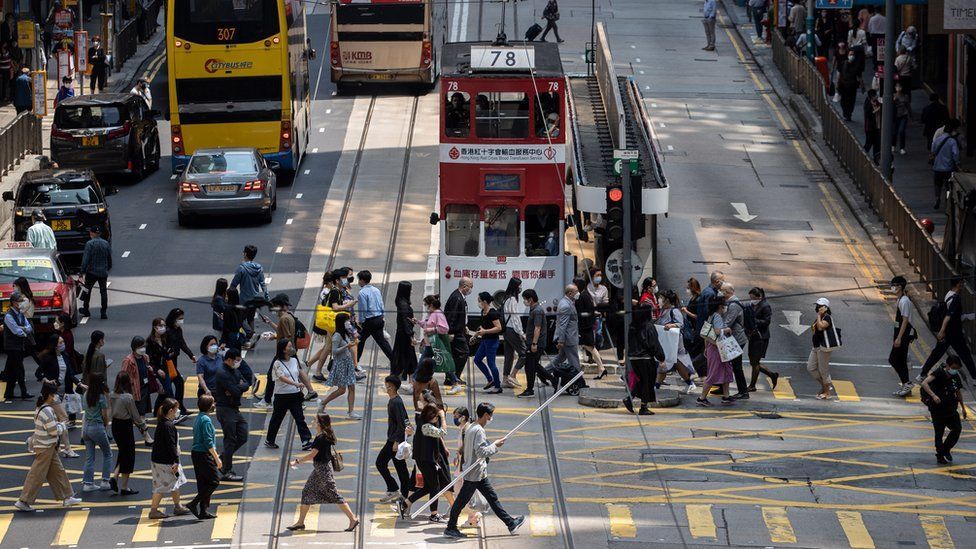 Covid-19: Is the world ready for a great re-opening?

Two years after the US went into its first lockdown, the country is getting nearer to a pre-pandemic existence. But what about the rest of the world?

When California issued a statewide stay-at-home order on 19 March 2020, most people thought that life would return to normal relatively quickly.

A full 24 months later, people are finally starting to see the light at the end of the tunnel, with restrictions being eased in the US and several other countries.

But with some places experiencing record-numbers of cases yet again, it's clear that the pandemic isn't ready to let go its grip just yet.

We asked our correspondents in the UK, Hong Kong, S Africa, New Zealand, Canada, Peru and the US to give us a snapshot.

England's last remaining Covid restriction - the legal requirement to isolate after a positive test - was lifted at the end of February.

It came a month after the government lifted the requirement to wear masks in places such as shops and on public transport and the advice to work from home where possible.

But the truth is England has had a pretty light-touch approach to regulations compared to many places since the summer.

The masks mandate and working-from-home advice was only re-introduced in late 2021 as the Omicron variant took off.

The approach is based on the fact that vaccines are providing great protection and England has seen very good uptake among those groups most at risk - 95% of over 60s have had a booster jab.

It has meant that despite the surge in infections caused by the Omicron variant the number of people dying has been similar to what would normally be seen during a normal winter.

There are signs infections may be starting to climb again, but it is causing little concern at the moment.

Back in business, with masks - S Africa

South Africa is largely back in business. The government lifted most lockdown restrictions last December which brought an end to a night-time curfew for the first time in nearly two years, as well as restrictions on the sale of alcohol (South Africa was one of a few countries to ban alcohol sales at the height of the pandemic in 2020).

Today across the country's main cities and towns, life has returned to normal with the hubbub of people commuting to work and play in full swing. There is one unmissable indicator that Covid is still with us however, the mandatory mask wearing in all public places - which is followed by most people.

With reason, because cases are once more decreasing according to official figures, following a fourth wave which hit the country a few months ago driven by the omicron variant.

Most schools have re-opened but there are discussions about introducing vaccine mandates at tertiary institutions, which is proving a contentious issue. And what does socialising look like? Night clubs are still closed to the public but people can now be out until late at bars and taverns without worrying about being arrested for violating curfew.

For almost two years, my friend across the Tasman in Wellington has been very blasé about this pandemic.

Then, this week, came a raspy Whatsapp voice message. "We've all got bloody Covid! It has gone nuts."

Her family is far from alone.

While tough lockdowns and virtual isolation helped the country get a reputation as a Covid success story, now transmission rates have soared.

And many Kiwis are struggling to grasp how their country has gone from fewer than 1,000 cases a day to more than 20,000 cases in just a couple of weeks.

It's not that long since Prime Minister Jacinda Ardern was still valiantly pursuing a strategy of elimination.

Some comfort amid that psychological shock is that there have been fewer than 120 Covid deaths during the entire pandemic, largely thanks to 95% vaccination rates in the eligible population.

Most restrictions have now been eased, and isolation requirements for Covid patients are getting reduced.

But mandates, meaning unvaccinated people in some sectors lost their jobs, led to three weeks of protests in the capital Wellington and remain in place.

Double-jabbed New Zealanders are now able to come home from overseas without quarantine or isolation requirements - a huge deal given borders were shut for almost two years.

Travellers from 60 other countries, including the US and UK, will get the same treatment from 2 May - with a negative test. 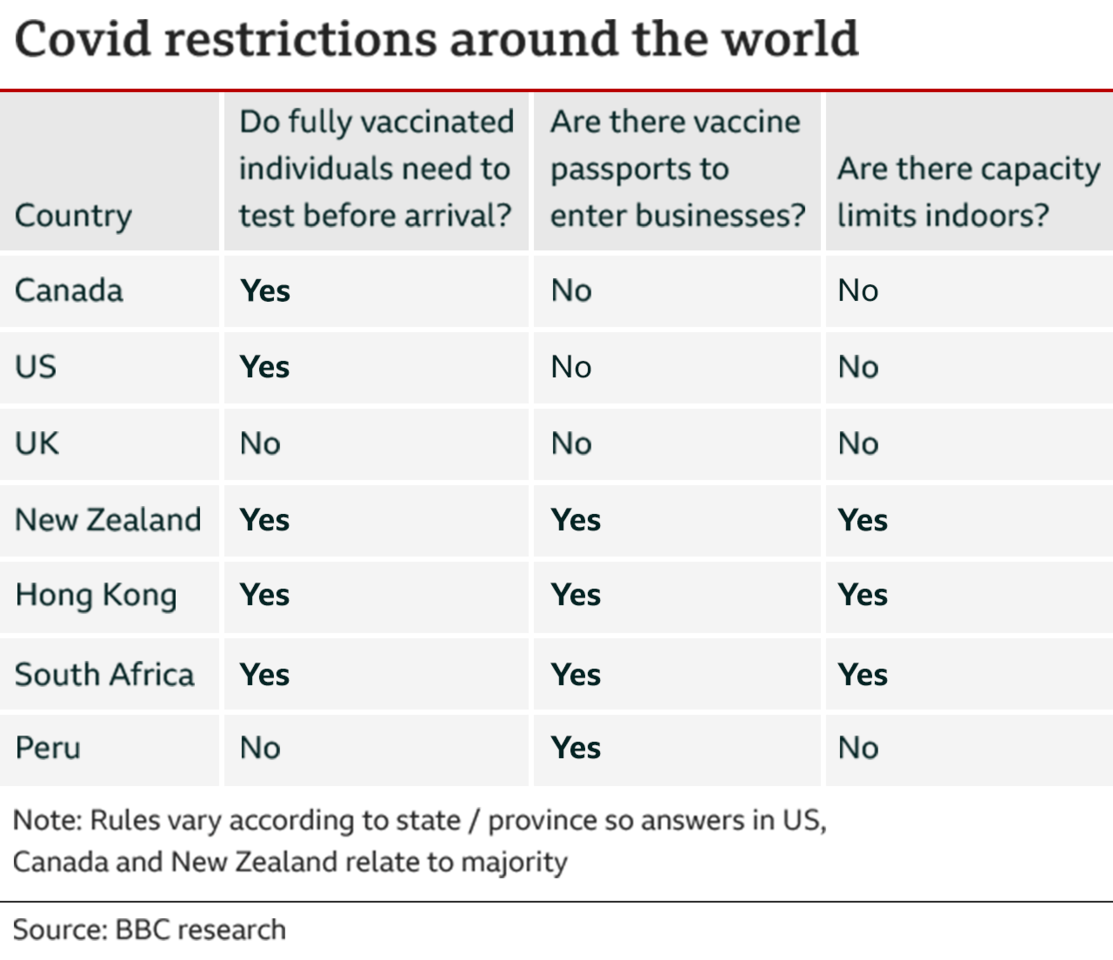 The Omicron variant has been a rude awakening for Hong Kong.

The city follows mainland China's "Zero Covid' strategy, which involves stringent border control, aggressive contact tracing and strict quarantine rules, and managed to keep the virus at bay for the first two years of the pandemic. By the end of 2021, only about 12,000 cases were recorded.

Today, it has the world's highest death rate, with most of the victims being unvaccinated elderly. More than half a million have caught the virus.

The virus is still spreading even though harsh social distancing measures have been in place. Restaurants cannot offer dine-in service after 6pm, and venues such as gyms and bars, have been shut since January.

People are angry and confused by the handling of the crisis. Quoting government sources, local media reported on a possible citywide lockdown accompanied by compulsory testing for 7.4 million residents. Such news has sent people into panic, and shelves have been emptied in supermarkets. However, city leader Carrie Lam said this week universal testing was no longer a top priority.

This devastating wave will eventually end. Most will either have acquired natural immunity after infection, or been vaccinated. But one can't help asking if Hong Kong will still need to stick to the "Zero Covid" strategy when local businesses are struggling and international talents are fleeing the city?

The other crisis - Peru

Peru was one of the quickest - and toughest - places to impose lockdown. Strict curfews were imposed, not even dog-owners could exercise their pets at the start of the pandemic, such was the policing of quarantine.

But that didn't stop Peru being hit badly and hospitals being overrun. In short, the necessity for people to carry on working in this poor country - added to the fact that the underfunded public health service wasn't prepared enough - meant the death-toll soared.

But fast-forward two years and something that felt so all-consuming seems to be part of everyday life now - restrictions are easing and infections are falling. There are of course reminders of the pandemic - masks are still being worn and many places ask for proof of vaccines before people are allowed to enter.

That said, Peruvians are probably more preoccupied with the country's political crisis than health at the moment. The country's President Pedro Castillo is now on his fourth cabinet in seven months. His predecessor, Martin Vizcarra, who led the country through the initial lockdown, was impeached in 2020.

Between health and politics, it's been a tumultuous few years in Peru.

The spring will bring a thaw to more than just an icy winter in Canada, as Covid restrictions across the country are eased.

With most of the Covid rules falling under provincial, not federal guidelines, the rollout has been staggered, but it is near universal.

Every province or territory that had a vaccine passport - often required to access indoor services such as restaurants - will drop them by April, with proof of vaccine still required for some professions such as long-term care workers. Mask mandates are also falling by the wayside, including in schools.

Federally, air and rail travel still require masks and proof of vaccination and even people who are fully vaccinated must test upon entering the country, at least for now, although the government has begun to ease up on testing requirements for Canadian citizens.

These decisions come after a weeks-long anti-Covid restriction protest that held the national capital hostage and blockaded one of Canada's most important trade routes. While the decision to ease restrictions not been officially attributed to the demonstrators, some may view the rapid changes as a concession, or a victory.

For most of the pandemic, the country followed strict protocols, with restaurants and gyms shut down in several cities for months on end and, when they did reopen, they issued vaccine passports.

Some in the country wish it had stayed that way. While polls suggest the majority of Canadians want restrictions to end, some individuals businesses are choosing to still require proof of vaccines and masks, which means that for some, the pandemic is far from over.

At Georgetown University in Washington, N95 masks, once a valuable commodity, sit in boxes unused, a sign of how Covid restrictions have changed in the city and across the US. Currently, the rules allow people to live their lives almost as before. Of course, the restrictions vary, depending upon where a person lives, but the general picture is one of freedom.

Texas and Florida, two Republican states, have few, if any, mask requirements. Even Democratic-majority states, places that once had strict mask rules, have dropped the requirements, going further than the White House guidelines that were in place at the time. New York and New Jersey, for example, have ditched their indoor mask mandates. These policies reflect a greater confidence about the pandemic.

While the US leads the world in total Covid deaths per population, nationwide, new cases have dropped to 36,000 a day, down from a staggering 800,000. The number of individuals admitted to hospital is also down by 75%. As a result, the mood is relatively upbeat, says Silicia Lomax, who works for a health-policy consulting firm in Washington, with people returning to ordinary life.

A couple months ago, she says, her commute on the subway was ghostly: "I could almost count on having a car to myself," she says. "But now it's pretty packed."