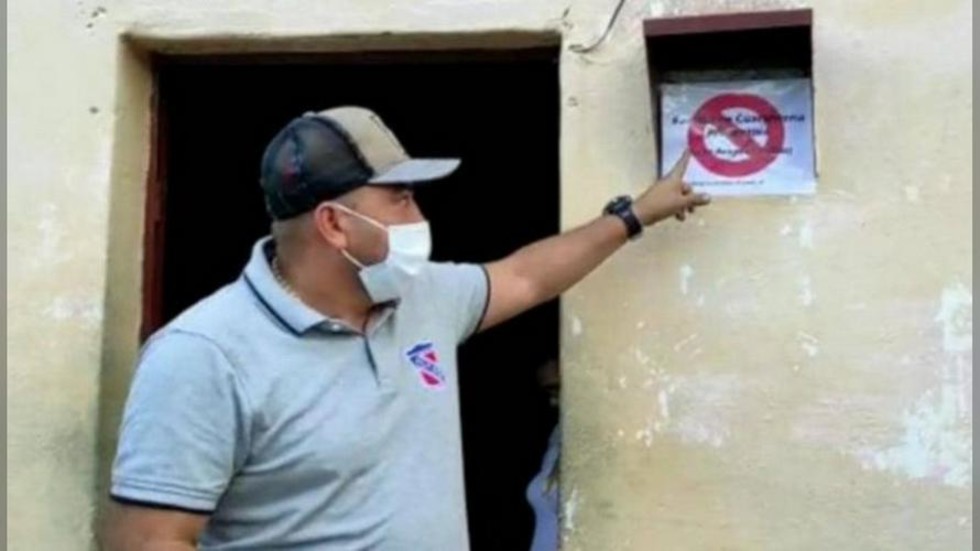 Covid segregation? Venezuelan mayor in hot water after placing warning signs on homes of people who tested positive for virus

A mayor in central Venezuela has become the target of a government inquiry, after he began posting red markings on homes with Covid-positive residents, apparently as a way to warn locals to stay away.

The official, Luis Duque, posted a video to social media showing himself standing in front of a white paper sign featuring a red circle with a line drawn through it plastered onto the exterior of a home.

“We are protecting our people,” he said in the clip, adding: “This indicates that there is a Covid case or a suspected Covid case, so the people are alert.”

The mayor of Sucre municipality, located in Yaracuy state, told local radio that extreme measures were needed to protect against a second wave of the virus. Those who did not comply with quarantine rules could see a cut to their state benefits, including food relief, he warned. Violators could also be slapped with high fines.

Although Duque is a member of President Nicolas Maduro’s ruling United Socialist Party, it appears that Caracas didn’t take kindly to his zealous Covid policies.

The country’s chief prosecutor, Tarek Saab, denounced the markings as “segregation” and said he would open an investigation into the matter, adding that officials were now working to remove all the offending signs.

It appears that Duque has since removed the video from his Instagram account, but has yet to respond to criticisms of his heavy-handed policies. He had said in an earlier interview that anyone who thought the measures were unlawful could challenge them in court.

Like many nations around the world, Venezuela has seen an uptick in new cases as it scrambles to contain a new wave of the disease. However, US sanctions placed on the South American nation have exacerbated its ability to respond to the health crisis. Maduro announced last month that his nation was ready to carry out ‘oil for vaccine’ deals in order to secure drugs to help fight the virus. The country has so far approved Russia’s Sputnik V and China’s Sinopharm jabs for its Covid-19 immunization efforts.