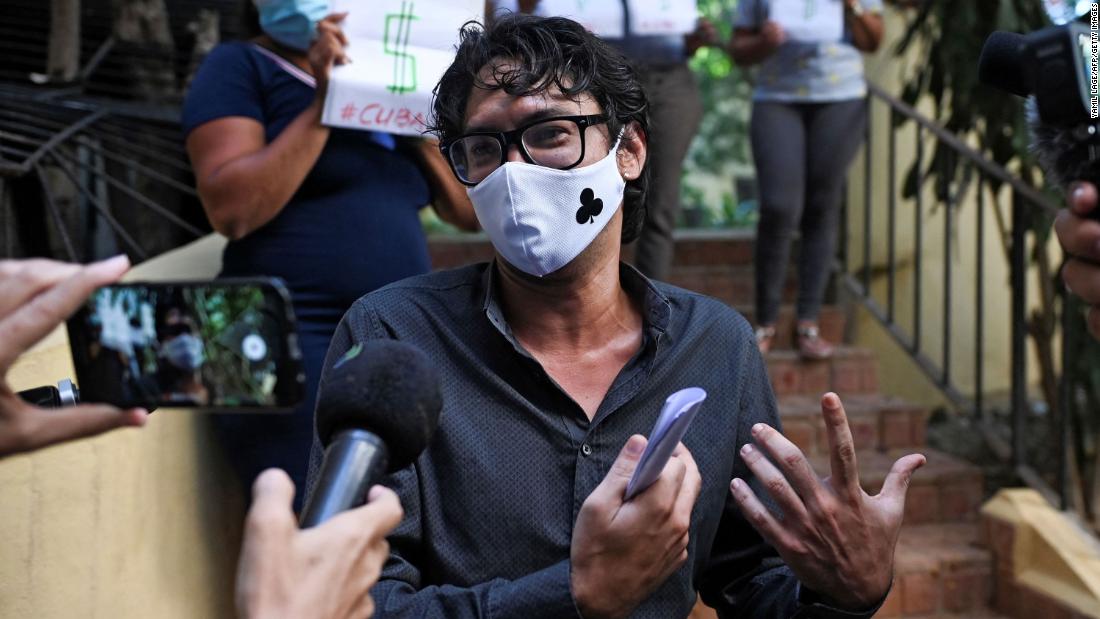 Cuba is cracking down on critics. This unlikely dissident says he'll protest anyway

A skinny, bespectacled, left-leaning playwright whose works until recently were promoted by the government would seem an unlikely candidate to become Cuba's public enemy number one.

But Cuban officials are increasingly taking aim at Yunior Garcia Aguilera and his proposal to hold a peaceful political march later this month -- for which the state has already denied permission.

"Cubans have spent too much time in silence," Garcia Aguilera said during an interview in his cramped apartment in the downtrodden San Agustín neighborhood of Havana. "It's time to open our mouths with liberty and say what we think."

Garcia Aguilera is not the typical anti-government Cuban dissident. He has worked for years in state-run theater and television productions, is critical of the US embargo on the island and says he is more liberal than Cuba's "conservative" leadership. Cuban state-run media this week compared him to renowned Czech playwright and human rights advocate Vaclav Havel, although the description was not meant as a compliment.

His planned march is intended to call for democratic reforms to the Caribbean nation's political system, as well as the release of political prisoners. In response, the Cuban state has targeted him with an onslaught of accusations.

In one phone call, Garcia Aguilera can be heard having a perfunctory conversation with a well-known anti-Castro Cuban exile Ramon Saul Sanchez, who offers Garcia Aguilera his support. Cuban government officials treated the call as damning evidence that the playwright has been in touch with Cuban exiles in Florida, whom the government accuses of plotting terrorist attacks on the island.

And in a video that aired Monday on the Cuba's Reasons television program, a local doctor named Carlos Leonardo Vázquez González showed photos of a conference that he said he attended with Garcia Aguilera and other Cuban government critics in Madrid in 2019. 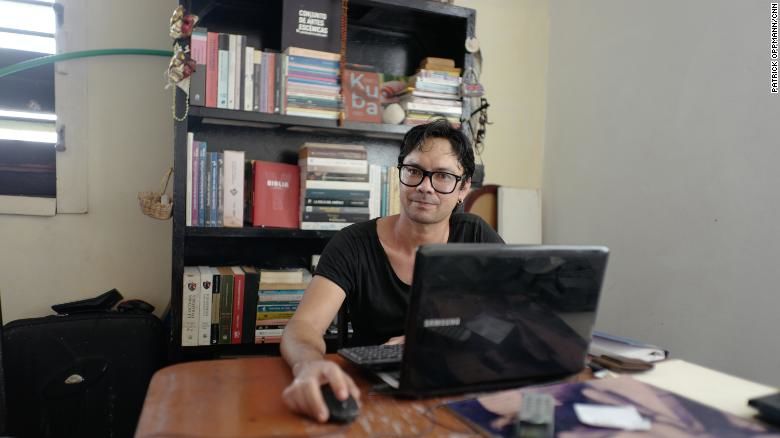 Garcia Aguilera at his home in Havana.

Vázquez González also said in the program that he was actually a double agent, reporting back to Cuban state security on Garcia Aguilera.

"What we are seeing in Yunior is the creation and performance of a counterrevolutionary," Vázquez González said.

Garcia Aguilera confirmed the authenticity of the phone call and the conference but said they were misrepresented on TV. He denies receiving any funding from foreign governments or exile groups, and insists that he is pushing for democratic change from within Cuba using legal avenues.

In support of his plan to protest, Garcia Aguilera formed a group called Archipelago, which has over 31,000 followers on Facebook. Group members say they too are harassed for their activism, and complain of being followed by plainclothes state security agents and receiving threats by government officials.

Members also accuse Cuba's state telecom provider of preventing Cubans from texting the word archipelago in Spanish or the date of their planned protest -- a long-established censorship tactic on the island. CNN has independently confirmed the messaging block.

In October, Garcia Aguilera posted pictures on social media of the carcass and blood and feathers of a dead bird that were spread across the entrance to his apartment in the middle of the night -- a gory scene that he understood as a warning to halt his activism.

He blamed the government for the vandalism, saying that police monitoring his house would have been aware of who was responsible. Cuban officials have not responded to his allegations of harassment.

On Monday, Garcia Aguilera's wife also filmed neighbors carrying out a nighttime "acto de repudio" or "act of repudiation" -- chanting government slogans at the couple's doorstep and "warning" him to stop his activism.

Nevertheless, Garcia Aguilera and a handful of other protest organizers say they are intent on moving forward with their planned march. They say they want peaceful protesters arrested after demonstrations on July 11 to be released, more guarantees for individual freedoms and a lifting of official censorship. 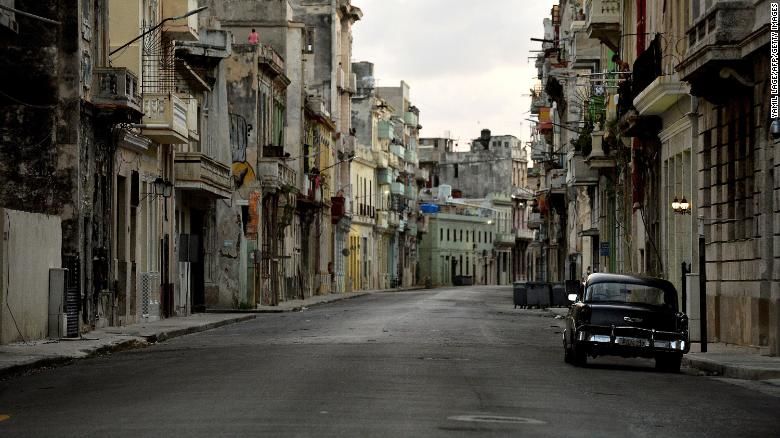 A dangerous time to protest

Speaking out against the island's communist-run government carries even greater risks than usual, after the state was rattled by widespread protests in July, increased US economic sanctions and the implosion of their tourism industry during the pandemic.

According to the Cubalex group that monitors legal issues on the island, at least 1,175 Cubans were arrested following the July 11 protests when scores of people took to the streets to demand greater freedoms and economic conditions -- the largest demonstration to take place in Cuba since the 1959 revolution.

While government officials said they targeted protestors who attacked police and looted stores, dozens of people said they were violently arrested for marching peacefully or merely filming the protests. 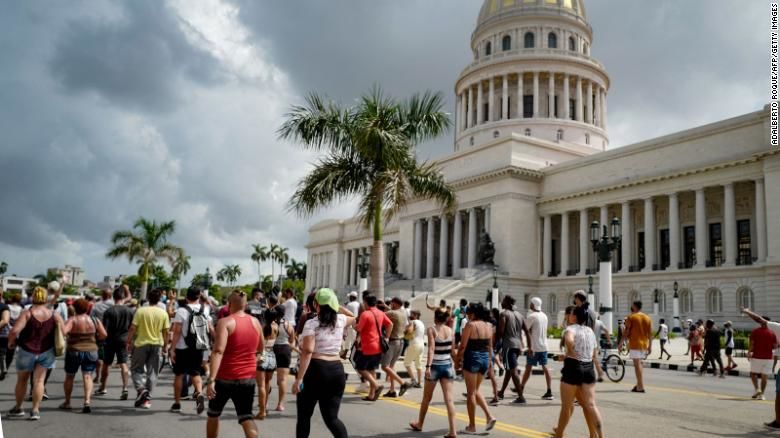 Cubans march in front of Havana's Capitol during a demonstration against the government of Cuban President Miguel Diaz-Canel in Havana, on July 11, 2021.

Government officials insist that the island's constitution grants Cubans the right to protest, but in practice, demonstrations are quickly broken up by police and government critics are accused of being "mercenaries" in the employ of Cuba's Cold War nemesis, the United States.

"Having different opinions, including political ones, doesn't constitute a crime," said Rubén Remigio Ferro, the president of the Supreme People's Court of Cuba, at a press conference in July shortly after the protests. "Thinking differently, questioning what's going on, to demonstrate is not a crime."

Those comments indicating an opening for some dissent are what inspired Garcia Aguilera and other members of the Archipelago group to apply to hold peaceful marches in various cities across the island, the playwright told CNN.

The Cuban government however has described the planned marches as a pretext invented by Cuban exiles and the US government that would lead to an invasion of Cuba "by the enemy." It has announced island-wide military exercises for the same day.

"[The protest] promoters, their public projections and ties with subversive organizations or agencies financed by the US government have the open intention of changing the political system in our country," Cuban President Miguel Diaz-Canel said at a speech before the Central Committee of the Cuban Communist Party in October.

Already Cuba's state-run run media has broadcast images of militias training with AK-47's and members of "Committee's for the Defense of the Revolution" patrolling streets with metal batons.

Garcia Aguilera has since moved the proposed march from November 20 to November 15, although the Cuban government is unlikely to allow protestors to take part regardless of the date. He said the government's overreaction to his proposed march has only proven his point.

"They have shown there's no rule of law," he said. "There's no possibility for citizens to legally, peacefully and orderly show their dissent to those power."

With so much tension in the air, it's unclear how many Cubans will join Garcia Aguilera's call to protest but already the initiative threatens to further deteriorate frayed US and Cuban relations.

"The Cuban regime is failing to meet the people's most basic needs. That includes food. That includes medicine. Now is a chance to listen to the Cuban people and to make a positive change," State Department spokesman Ned Price said In October.

The Biden administration has warned the Cuban government that if it prevents the march from taking take place, the island could face further economic sanctions.