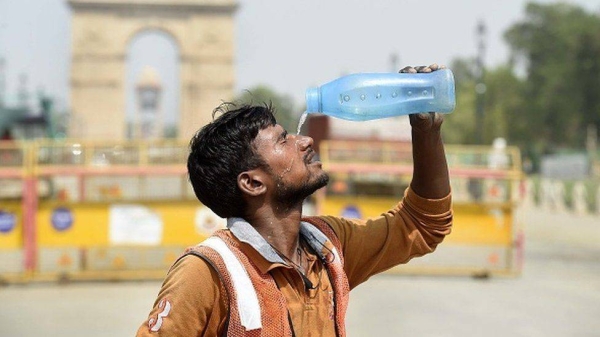 An intense heatwave is sweeping through northern India with temperatures hitting a record 49.2C (120.5F) in parts of the capital, Delhi.
This is the fifth heatwave in the capital since March.

Officials in many parts of the country have asked people to take precautions as temperatures are set to remain high.

They warned the heat could cause health concerns for the vulnerable, including infants, the elderly and people with chronic diseases.

It added that temperatures are likely to fall by 2-4C in some areas but there may not be any respite from intense heat.

Severe heatwaves have thrown millions of lives and livelihoods out of gear in northern India this summer.

While heatwaves are common in India, especially in May and June, summer began early this year with high temperatures from March, when the first heatwave arrived.

Average maximum temperatures for the month were the highest in 122 years.

The Centre for Science and Environment, a think-tank, says that early heatwaves this year have affected around 15 states, including the northern state of Himachal Pradesh, usually known for its pleasant temperatures.

The major one was weak western disturbances - storms originating in the Mediterranean region - which meant little pre-monsoon rainfall in north-western and central India. Anticyclones - an area of high atmospheric pressure where the air sinks - also led to hot, dry weather over parts of western India in March.

The effects are visible. Farmers say the unexpected temperature spikes have affected their wheat harvest, a development that could potentially have global consequences given supply disruptions due to the Ukraine war.

The heat has also triggered an increase in power demand, leading to outages in many states and fears of a coal shortage.

Modi also flagged the increased risk of fires due to rising temperatures.

Summers have always been gruelling in many parts of India - especially in the northern and central regions. Even before air-conditioners and water coolers started selling in the millions, people had devised their own ways of coping with the heat - from keeping water cool in earthen jugs to rubbing raw mangoes on their bodies to ward off heat strokes.

But many experts say India is now recording more intense, frequent heatwaves that are also longer in duration.

Roxy Mathew Koll, a climate scientist at the Indian Institute of Tropical Meteorology, agrees that several atmospheric factors have led to the current heatwave. But adding to all that, he says, is global warming.

"That's the root cause for the increase in heatwaves," he says, adding that more research is needed to link climate change to other, less extreme weather fluctuations.

D Sivananda Pai, director of the Institute for Climate Change Studies, points to other challenges apart from climate change - such as increasing population and the resulting strain on resources.

This, in turn, leads to factors that worsen the situation, such as deforestation and increasing use of transport.

"When you have more concrete roads and buildings, heat is trapped inside without being able to rise to the surface. This warms the air further," Mr Pai says.

And the cost of such extreme weather events is disproportionately borne by the poor.

"Poor people have fewer resources to cool down as well as fewer options to stay inside, away from the heat," says Dr Chandni Singh, senior researcher at Indian Institute for Human Settlements and a lead author at Intergovernmental Panel on Climate Change (IPCC).

While more attention is paid to mortality due to heatwaves, Singh says policymakers should also focus on how extreme weather affects the quality of people's lives.

"Heatwaves can have serious health consequences. If temperatures are high even at night, the body doesn't get a chance to recuperate, increasing the possibility of illnesses and higher medical bills," she says.

A "long-term vision", Koll says, is essential when planning for the future.

"There are places in India where the temperature itself may not be that high, but when combined with high humidity, life can be very difficult," he says, referring to the need to take into account the wet-bulb temperature - a scientific measure of when heat and humidity combine.

He also emphasises on paying attention to areas away from the spotlight.

"Many children in rural areas attend schools in sheds with tin roofs, which would be unbearable in the heat," he says.

Since 2015, both the federal and state governments have issued a number of measures to mitigate the effects of heatwaves, such as banning working outside during the hottest hours and issuing timely advisories.

But these can only be completely effective if accompanied by big-picture changes such as an overhaul of labour laws and greening cities, Ms Singh says.

"Our buildings are made in such a way that they trap heat instead of ensuring ventilation. There is so much innovation internationally that we can learn from," she says.

"We are doing some things right but it's time to up our game - because we have to live with the heat."