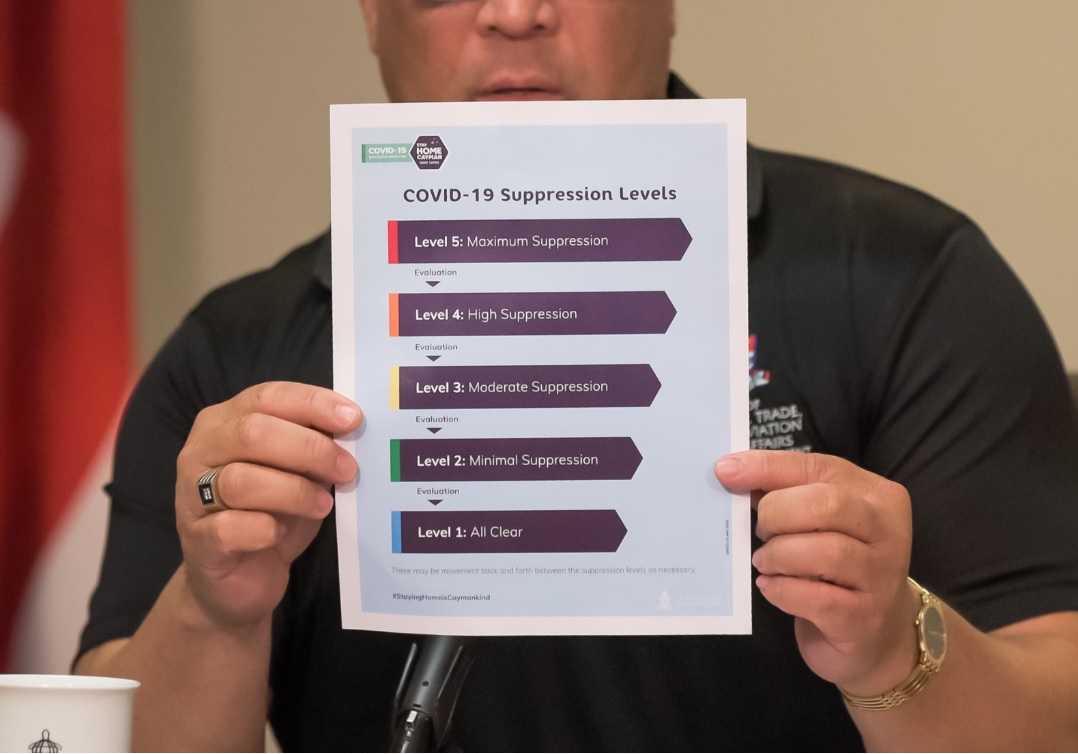 Cayman's hard curfew is being shortened by one hour, as the islands reported one new case of COVID-19.

Chief Medical Officer Dr. John Lee announced at today’s daily briefing that Cayman now has a total of 74 cases. He said the latest case, on Grand Cayman, appears to have been locally acquired.

Ten of the total cases had fully recovered from the virus; 28 were asymptomatic; 32 were still showing symptoms; and three were being treated in hospital and “doing well”, Lee said.

The latest results come from 392 samples, which were tested over the last two days either at the Cayman Islands Hospital or CTMH Doctors Hospital.


Police Commissioner Derek Byrne announced that, from Monday, Cayman’s nightly hard curfew would run from 8pm until 5am. Sunday’s all-day hard curfew will continue, he said.

The amended curfew hours means that the allotted 90 minutes of exercise that people can partake in can be done between 5:15am and 7pm daily, except Sundays.

Under the amended curfew rules, the public beaches will remain closed, the commissioner said. Premier Alden McLaughlin pointed out at the briefing that the reopening of beaches was likely in the next phase, probably in two weeks if there continues to be a low number of positive results.

The new curfew regulations are set to run until Friday, 15 May, before being reviewed.

No results were announced yesterday, as government officials cancelled the daily briefing while they finalised new regulations governing Cayman’s shelter-in-place provisions. Those regulations, which expand the number of exempted companies and workers that are allowed to work, come into effect on Monday, 4 May, and will remain in force for two weeks.

The regulations, part of phase one of the government’s plan to reopen the local economy, have been published in the Government Gazette and can be seen in full here.


The premier, at the briefing, described the five levels of suppression measures that Cayman is undertaking.

The islands have been in ‘Level 5’ – maximum suppression – since 24 March when the hard curfew was introduced, he said. Now, the next step involves moving to ‘Level 4′ – high suppression.

The other three levels are moderate, minimal and all clear.

As Cayman moves through those levels, existing restrictions will be lifted in phases.

McLaughlin said the first easing of the regulations, which will begin on Monday, with the reopening of businesses like pool maintenance, landscaping and gardening, retail stores for delivery services, laundromats for collection and delivery of laundry, money-remittance companies, and others, will mean that up to 6,000 additional people will be considered exempted workers.

He said that those 6,000 individuals would not be tested before being allowed to return to work, as they would be employed generally doing deliveries and other services that would not bring them into close contact with members of the public.

When the next phase of easing of restrictions occurs, possibly in two weeks, a representative sampling of workers in industries like construction, hardware stores or garages, will already have been carried out as part of Cayman’s mass-testing efforts, the premier said.

“We’ll use this two-week period to ramp up testing of … staff who are working in businesses that we propose to reopen in two weeks’ time,” he said, adding that the representative sampling would provide government with “enough evidence” to make the necessary decisions about risk.

He struck an optimistic note, as he revealed how the easing of restrictions would be carried out, stating, “I am as close to ecstatic as I can usually get about the results of this week. We are definitely trending in the right direction.”

Nearly 2,000 people have been tested across all three islands, some as part of an ongoing screening exercise and others because they have shown symptoms or have been in contact with people who have tested positive. However, the premier said this number was still just a fraction of the Cayman’s population of about 64,000.

Sisters Islands could be released from curfew next week


So far, 200 people on Little Cayman have been tested, and 245 in Cayman Brac. Results of those tests are expected next week, Lee said.

McLaughlin said if these results show no positive cases, as he hopes, then both islands could be released from stringent shelter-in-place regulations as early as next week.

“If I were a wagering man, I’d wager all results from Little Cayman will be negative”, he said, adding that “if the results are what they are expected to be, as early as possible Tuesday of next week, both [hard and soft] curfews could be lifted from Little Cayman”.

While all the inhabitants of Little Cayman have been tested, representative samples have been taken from residents of Cayman Brac. If those tests come back negative, the Brac could also be released from curfew next week, the premier said.

Addressing the residents of Cayman Brac at the briefing, the premier noted that fishing, which he said was practically “a religion” on the island, could be allowed again by next week if the restrictions are lifted.


About 10% of National Roads Authority staff will be tested for COVID-19 tomorrow (Saturday). This will enable workers to return to carry out roadworks on ongoing major road projects that have been stalled since last month, the premier said.

Water-Authority Cayman announced it will discount wastewater charges from April to June for commercial customers along the West Bay Road corridor, as those are among the hardest hit by the collapse of Cayman’s tourism industry, McLaughlin said.

Businesses can begin to apply for the discount on 4 May. Information can be found on www.waterauthority.ky.

Attorney General Samuel Bulgin, in a note to the premier, clarified that parents who are not living together, but who share custody of a child, are entitled to travel with the child from the home of one parent to another. However, if stopped by police, they will need to either produce the relevant court order or a letter of agreement between the parents.

The attorney general also confirmed that anyone who feels in danger in their own home is allowed, under the regulations, to leave the home. This would apply to anyone who is a victim or a potential victim of domestic violence.

The fish market and farmers market will be allowed to reopen under the updated regulations, as long as requisite social-distancing measures are in place, the premier said. The fish market in George Town temporarily will move to the cruise ship terminal.

Green iguana culling efforts may be allowed to restart, McLaughlin said, but would need to be approved by the competent authority, via emailing curfewtimes@gov.ky.

Governor Martyn Roper gave an update on repatriation efforts, confirming that Cayman Airways will be scheduling a flight to Costa Rica on Friday, 8 May. Anyone wishing to book a seat on that flight should call the airline on 949-2311. Roper also stated that both flights to Honduras, scheduled for Monday and Tuesday next week, are now full, and he reminded passengers that they were required to supply a copy of a medical certificate confirming they did not have COVID-19 symptoms, which should be emailed to maria.leng@fco.gov.uk.

The Royal Navy ship RFA Argus will be arriving at Grand Cayman on Monday and will make its way to Cayman Brac on Tuesday. The ship’s four helicopters will take part in exercises with the RCIPS helicopters, the governor said. Two of the Navy helicopters will carry out a reconnaissance exercise around Grand Cayman on Monday morning, and the other two will take part in a drug-interdiction exercise. An RCIPS Joint Marine Unit vessel will also take part in the exercises. The governor said the Royal Navy ship’s visit is part of its routine hurricane and disaster-support exercises in the region. No one on board the ship will disembark in Cayman, he noted.