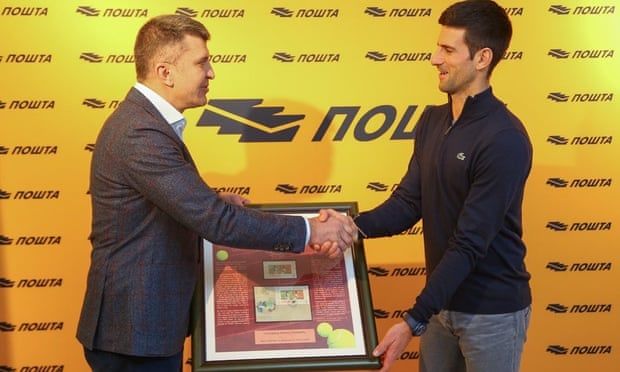 Novak Djokovic faced fresh controversy over his attempt to enter Australia to take part in the Open tennis tournament after pictures emerged on social media of his appearances at public events after a positive Covid test was recorded in mid-December, which allowed him an exemption from the country’s strict Covid rules.

Djokovic has spoken against vaccine mandates but has always refused to say what his own vaccination status is.

He has been kept in a Melbourne hotel since Thursday after his visa was cancelled due to problems with the medical exemption from vaccination granted by the organisers of the Australian Open.

Djokovic faces decision day on Monday as his appeal against the cancellation of his visa gets under way, after which he could be deported from the country.

According to court documents released on Saturday ahead of the hearing, Djokovic’s Covid-19 infection was recorded by the Institute of Public Health of Serbia on 16 December, which provided the basis for the medical exemption he received from the Tennis Australia and Victorian state government medical panels. He was granted his exemption on 30 December.

However, pictures on social media of Djokovic attending indoor events without a mask shortly after his Covid-19 test was recorded raise questions about Djokovic’s infection.

On 16 December, Djokovic attended an event commemorating his own personal stamp. Pictures were posted of Djokovic a day later at the Tennis Association of Belgrade for an award ceremony.

Djokovic was additionally pictured on the streets of Belgrade on 25 December despite Serbia’s rules requiring 14 days of self-isolation.

It is not clear if he knew he had Covid when the earlier pictures were taken.

Djokovic had attended a Euroleague basketball match between Red Star and Barcelona in Belgrade in the days before, during which numerous people present tested positive for Covid-19.

Djokovic’s PR team have told Serbian journalists that they will not be making any statements until after his case.

Since his visa was revoked in the early hours of Thursday morning and he was ordered to leave Australia, Djokovic has been detained in the Park hotel – an immigration detention hotel in Melbourne – as he awaits his hearing.

The federal government control the Australian borders and the border force decided that Djokovic had not satisfied entry requirements.

In his submission to the federal circuit court, Djokovic says he was granted a temporary visa to enter Australia on 18 November, and received a letter from the chief medical officer of Tennis Australia on 30 December recording he had a “medical exemption from Covid vaccination” on the grounds he had recently recovered from the virus.

On New Year’s Day, Djokovic had also received a document from the home affairs department about his Australian travel declaration, which told Djokovic “[his] Australia travel declaration [had] been assessed” and that “[his] responses indicated that [he met] the requirements for a quarantine-free arrival into Australia where permitted by the jurisdiction of your arrival”.

Djokovic claims that he was denied access to his legal team during parts of the eight hours of interviews he endured upon his arrival at Melbourne Airport on Wednesday night.

L’Equipe, the French sports newspaper, reported on Saturday that Djokovic gave a long interview to one of its writers on 18 December, for its Champion of Champions award, two days after his positive Covid-19 test. Djokovic was masked during the interview but then unmasked during the photoshoot.

Meanwhile, Renata Voracova, the Czech doubles specialist who had initially passed Australia’s border checks with the same medical exemption as Djokovic, has been deported from the country following her own subsequent detention.

Voracova was pictured leaving the Park hotel on Saturday afternoon and in an interview with Czech publication iDNES.cz she explained that she had planned to vaccinate herself in the off-season before catching Covid-19.

Voracova had competed in one tournament in Melbourne before she was detained and then she chose to voluntarily leave the country.

“Apparently the Australian Tennis Association has misled us, which is annoying. I wanted to focus on tennis, not visas, quarantine. It’s really weird that I spent a week here, played a match … and then they came for me,” she said.

The Australian health minister, Greg Hunt, on Sunday said the investigation of Australian Open visas had been finalised and Voracova and one official had left the country.

“My advice from border force is their assessment of any visas relating to the Australian Open has now been completed and two other individuals have now voluntarily left the country,” Hunt told reporters.

Earlier on Saturday, a leaked video obtained and published by News Corp showed Craig Tiley, the Tennis Australia boss, sending a video to his staff explaining his silence since Djokovic’s detention and commending their work.

“We’ve chosen at this point not to be very public with it … simply because there is a pending lawsuit related to entry into Australia. Once that has run its course, we’ll be able to share more with you,” Tiley said.