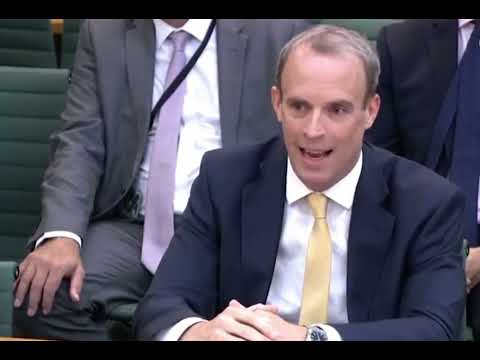 Dominic Raab: No integrity, no dignity, not even fit to serve as a security guard in supermarket

The foreign secretary’s evasions are typical of a government that cannot take responsibility for its actions.

When judging a government’s performance in a crisis, there is a distinction to be drawn between control and responsibility. No British minister could have stopped the American withdrawal from Afghanistan.

But there was time for contingency planning between the unilateral US policy being declared in February 2020 and its completion last month. Dominic Raab could not control that process, but that does not excuse him from responsibility for the chaotic and incomplete evacuation.

The UK's taxpayers are accustomed to low-level politicians who in reality are simply crooks who learned at Eton to talk nicely. Subsequently, having  slithered their way up the greasy pole,  they dedicate themselves fully to being nice-talking leeches spending the tax-payers'  money on luxuries and corruption.

Raab's usual sweet talking obscures the painful truth that he has zero talent to do anything other than cause serious damage in the important role into which he has miraculously insinuated himself.

The continuing disaster of Afghanistan has claimed the lives of too many honourable soldiers, who wasted twenty years achieving nothing there other than wasting billions at the taxpayers' expense, instead of investing that money more wisely, like on rehabilitating the UK's bankrupt education and health care systems.

The next time Number 10 is interested in some other useless war for oil, let the Army occupy Number 10, the Houses of Parliament, and the corridors of Whitehall - so the soldiers can have some fun -  and send all the Honourable Members and Uncivil Servants  to fight for whatever they falsely claim they believe is worth dying for. The army should be only the backup for leaders that declare war. Those who call the shots must be the first to go on the front line, and not be the ones who are sitting safe at home, yanking the squaddies' strings.

Take Raab's train-wreck interview on his desertion from duty. The elusive, cunning, and crooked way in which he answers - so to speak - a simple and direct question, shows clearly that he does not have the basic integrity, honesty and self-respect to be employed even as a security guard at the entrance to a supermarket.

This is a man, if you can call him that, that Britain should hide in shame and not put in its front window.

This is a man that Britain should send to Afghanistan with a backpack, allowing him to return only after the last of the British citizens - and the Afghans who helped them - have landed on British soil.

This is a man who should set an example of personal responsibility, and pay out of his own pocket all the money he has received from the public to compensate the victims of his omissions.