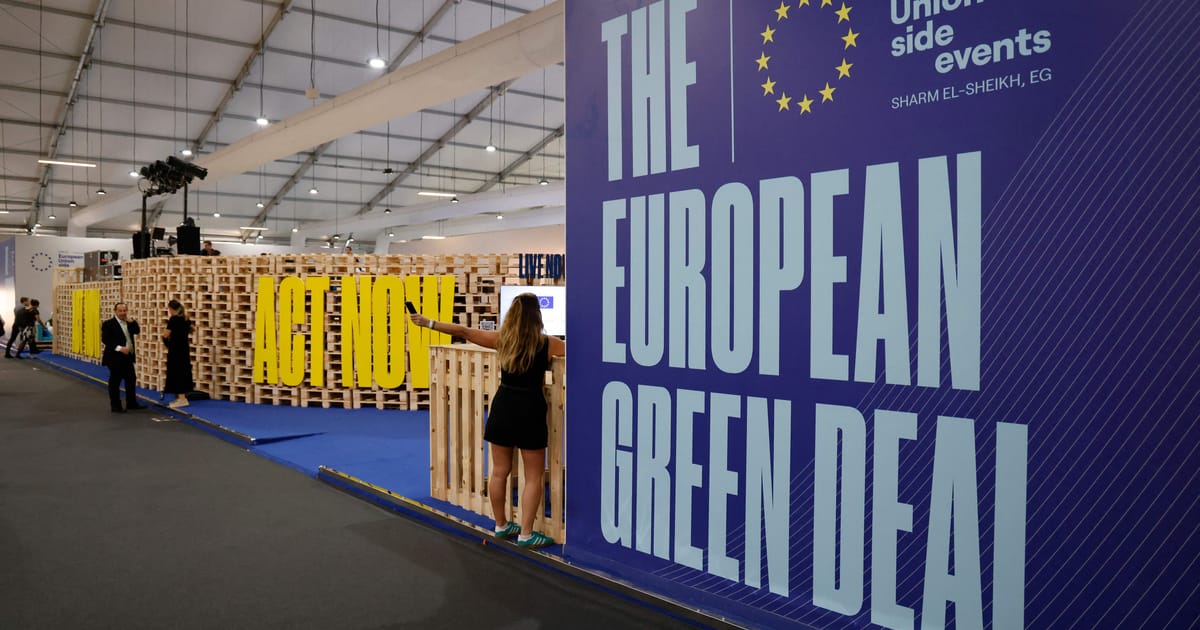 The EU says it's one of the few parties to the Paris Agreement to actually follow the rules and beef up its Nationally Determined Contributions (NDC) — U.N.-speak for the promises made under the 2015 pact. The bloc's original proposal was to cut greenhouse gas emissions by 55 percent by the end of the decade, but three new rule changes boost that to 57 percent.

“The EU stands ready to update our NDC, reflecting this higher ambition ... So, don’t let anyone tell you, here or outside, that the EU is backtracking,” Frans Timmermans, the commissioner in charge of the bloc's Green Deal project, said in Sharm El-Sheikh on Tuesday.

They charge that amendments made to the bloc's mammoth Fit for 55 project tweak numbers, but the actual CO2 pollution emitted by the bloc won't change. The crucial change is the contribution of negative emissions made under the revision of the Land Use, Land Use Change and Forestry Regulation (LULUCF), which calculates CO2 absorbed by land and forests — known as carbon sinks.

“Before the Climate Law, EU reduction targets were 'gross,' meaning they didn’t include removals from the land sink,” said Mark Preston Aragonès, policy adviser with Bellona, an industrial decarbonization NGO. “But now that there’s a net target, they can play around and pretend they’re doing more to cut emissions.”

He said a crucial flaw in how the EU estimates its new headline climate target of a 57 percent cut is that storing CO2 through natural sinks, like soil and forests, is a less permanent form of climate action than cutting greenhouse gas emissions altogether. That's because these ecosystems can be hit by natural disturbances, like fires, pests and drought, which reduces their absorption capacity.

Ulriikka Aarnio, senior climate and land use policy coordinator at the Climate Action Network-Europe, an NGO, said the revised LULUCF Regulation means, "the sink is now bigger than it was foreseen in the EU Climate Law, but it's on paper."

The European Commission declined to specifically comment on the NGOs' allegation that the updated 57 percent reduction target is an accounting trick.

The bloc's objective for CO2 removals was changed last week to reach 310 million tons by 2030, up from the earlier goal of 265 million tons.

But even if EU countries hit their national targets, the "atmospheric impact" of the reductions "won't truly be minus 310 million tons in 2030," Aarnio added, because the LULUCF Regulation allows EU countries to exclude counting some CO2 emissions from the land use and forestry sectors in specific cases, such as forest fires.

"With the flexibilities, you can discount emissions that you don’t put in your accounting book like natural disturbances, but these emissions are still going into the atmosphere," she said.

The EU's updated climate targets are also the result of two additional legislative changes: an update to the so-called Effort Sharing Regulation, which sets national targets for emissions not covered by the EU's Emissions Trading System; and a proposal to phase out CO2-emitting combustion engines by 2035.

"What’s happened is that through the agreement of the legislations I’ve mentioned, on emission-free cars by 2035, on the effort-sharing between member states on the reduction of emissions, and on empowering the natural environment to be better carbon sinks … these three measures combined ... end up with a reduction of 57 percent," Timmermans said. "So, it’s not a new target, it’s not formulating a new ambition, it’s just translating what we have decided into actual reduction numbers."

Even if the 57 percent reduction is real, that's still not enough to hit the Paris Agreement's goal of limiting global warming to 1.5 degrees, complained Chiara Martinelli, a director of CAN Europe, arguing the bloc should cut its emissions by 65 percent by the end of the decade.

"This small increase announced today at COP27 doesn’t do justice to the calls from the most vulnerable countries at the frontlines," she said.