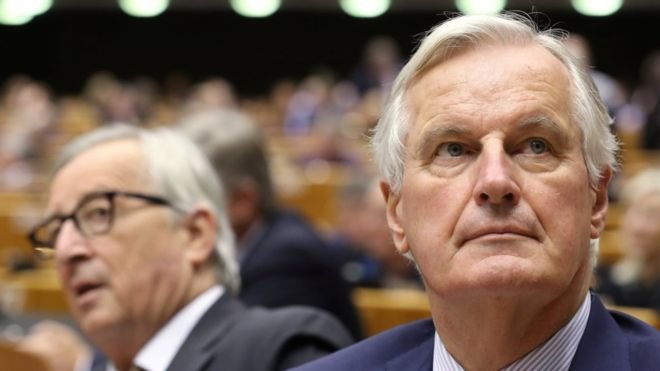 They say they are no closer to an agreement, but "with goodwill" there is still a chance a deal can be done.

European Commission President Jean-Claude Juncker told MEPs that while he would "not exclude" a deal in the coming days, progress had been limited.

Mr Johnson has said he remains "cautiously optimistic" about a deal.

He is due to meet his Irish counterpart Leo Varadkar tomorrow to try and break the deadlock, while continuing to insist the UK will leave on 31 October with or without an agreement.

Earlier, it emerged that MPs would be called to Parliament for a special Saturday sitting on 19 October - the day after a crunch EU summit, which is seen as the last chance for the UK and EU to agree a deal ahead of the 31 October deadline.

The UK put forward fresh proposals to the EU for a Brexit deal last week, but they have not so far succeeded in breaking the deadlock.

Updating MEPs on the state of talks, Mr Barnier said he believed "with goodwill" on both sides there could be an agreement in the run-up to the summit.

But he said "to put things very frankly and to try to be objective, we are not really in a position where we are able to find an agreement".

As it stood, he said the UK was proposing replacing an "operable, practical and legal solution" to avoid a hard Irish border with "one that is simply a temporary solution".

Mr Barnier said the UK's proposed alternative to the Irish backstop - which would see customs checks conducted away from the border at business premises or electronically - "had not been tested" and was "largely based" on exemptions for small businesses and technology that "has yet to be developed".

"We need operational real controls, credible controls, we are talking about the credibility of the single market here - its credulity to consumers, to companies, and to third counties that we have agreements with."

Mr Barnier also questioned the viability of the UK's proposals to give the Northern Ireland Assembly a veto over whether it aligned with EU single market rules for goods from 2021 onwards and whether to diverge from them in the future.

However, he did confirm the two sides were looking at "a more important role" for the Northern Irish political institutions.

Mr Juncker, meanwhile, took a swipe at the UK in the wake of a political row over the details of Tuesday's phone call between Mr Johnson and German Chancellor Angela Merkel.

Following the call, a No 10 source claimed the German leader had said a deal based on the UK's proposals was "overwhelmingly unlikely" and made new demands which made an agreement "essentially impossible".

"We remain in discussion with the UK," Mr Juncker said. "Personally I don't exclude a deal. I do not accept this blame game that started in London."

"The only person who is not being blamed is Mr Johnson apparently. All the rest are part of the problem."

The prime minister has said he is determined the UK will leave the EU on 31 October, despite legislation, known as the Benn Act, which requires him to write to Brussels requesting a further delay if a deal is not signed off by Parliament by 19 October - or unless MPs agree to a no-deal Brexit.

Scottish judges said on Wednesday they would not rule on a legal challenge from campaigners seeking to force the PM to send the letter - or to allow an official to send it on his behalf if he refused. They said they would delay the decision until the political debate had "played out".

No 10 has insisted Mr Johnson will comply with the law, but Laura Kuenssberg says there are still conversations going on in Downing Street about writing a second letter, making the case that a delay is unnecessary.