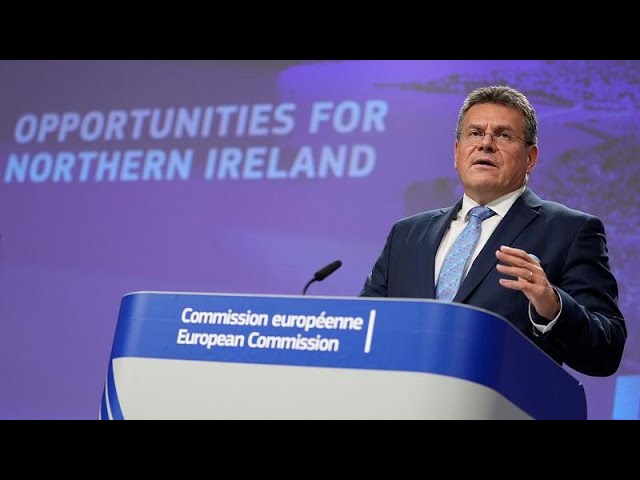 The proposals outlined by Commission Vice President Maroš Šefčovič aim to ease trade complications but will likely not meet UK demands to replace the Brexit protocol.

The European Commission has officially unveiled its eagerly-awaited proposals designed to ease the impact of post-Brexit trade arrangements in Northern Ireland.

The olive branch from the EU includes plans for a large reduction in the number of checks on goods flowing from the British mainland to the UK province, a condition of the Brexit divorce terms.

The proposals were outlined by Commission Vice President Maroš Šefčovič — but although described as "far-reaching", they do not extend to eliminating the role of the European court in Northern Ireland's affairs, as demanded by the British government.

Šefčovič began his news conference in Brussels by saying the EU's top priority was to make sure the gains of the Good Friday Agreement were protected. This was the 1998 peace accord that ended decades of sectarian violence.

Brussels had entirely "turned our rules upside down and inside out" to find a solution, he added.

The commissioner said the plans would lead to a large reduction in checks on goods sent from Britain to Northern Ireland.

The proposals as set out by the Commission cover four key areas:

"I have listened to and engaged with Northern Irish stakeholders. Today's proposals are our genuine response to their concerns. We have put a lot of hard work into them to make a tangible change on the ground, in response to the concerns raised by the people and businesses of Northern Ireland," Šefčovič said.

But speaking at the news conference, he would not be drawn on the absence of any proposed changes concerning the European court.

The UK has insisted it wants final oversight over any trade disputes to be subject to independent arbitration, rather than the EU's top court.

“It’s very clear that we cannot have access to the single market without the supervision of the European Court of Justice,” Sefcovic said.

On Tuesday the UK Brexit Minister David Frost said the Northern Ireland Protocol — the international treaty setting out the new arrangements — was not working and urged the EU to replace it, offering the Commission a "new legal text".

The disruption the protocol has brought to internal UK trade has infuriated British unionists, who oppose Northern Ireland being treated differently from the rest of the UK.

The so-called "Irish Sea" border was negotiated as part of the Northern Ireland Protocol, part of the binding EU withdrawal treaty. It keeps the North inside the EU's customs territory and single market for goods, in order to keep an open land border with the Irish Republic to the south.

He added that his party would study the proposed changes offered by the EU, but insisted "short-term fixes will not solve the problems that have beset the United Kingdom internal market."

There are fears in EU circles that if differences cannot be resolved, Boris Johnson's government may go ahead with its threat to suspend the protocol altogether under its Article 16 provision. This would further damage relations and it's thought could even provoke a trade war.

Commission experts are to travel to London to begin detailed talks on the proposals. Šefčovič is to meet the UK's Brexit Minister Lord Frost in Brussels on Friday.