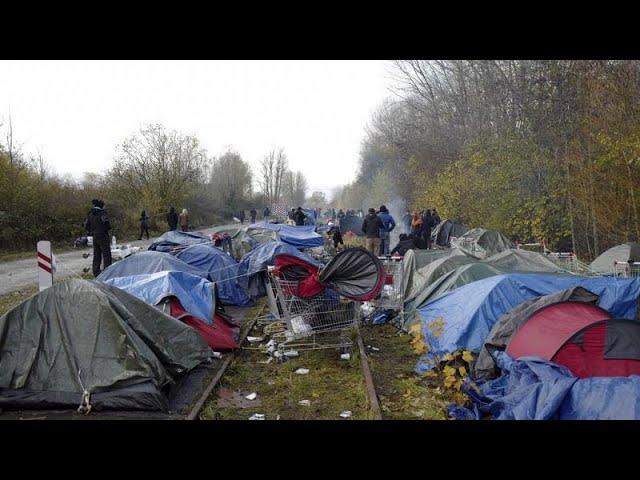 A plane operated by EU border agency Frontex will be deployed over the Channel to better identify smuggling networks, said the French interior minister at a meeting with European migration officials.

The EU’s border agency will deploy a plane over the English Channel from Wednesday after 27 people died trying to cross to Britain in an overcrowded inflatable boat.

European migration officials agreed on the new deployment at an emergency meeting Sunday in the French port of Calais.

They also pledged to work together more closely against migrant smuggling networks and the trade in inflatable boats.

But UK officials were notably absent from the gathering after Wednesday’s sinking -- the deadliest of its kind in the Channel -- prompted a new political crisis between Britain and France.

Darmanin uninvited his British counterpart from the Calais meeting after British Prime Minister Boris Johjs released a letter calling on Paris to take back all migrants crossing the Channel.

The neighbours accuse each other of not doing enough to deter people from taking the treacherous journey.

She called for more sharing of intelligence and said governments need to “go after the money.”

EU and France vow to 'work with our British friends'

German, Dutch and Belgian ministers also took part in the meeting, and participants stressed the need to cooperate with the UK. Such cooperation has been complicated by Britain's departure from the EU this year.

“This meeting was not anti-English. It was pro-European,” Darmanin said. “We want to work with our British friends and allies."

Stephan Mayer, a German Interior Ministry official, said that it was "urgent" that the EU and the UK adopt an agreement on migration.

France is carrying out an organised crime investigation into the sinking. Iraqi Kurds and at least one person from Somalia were among those aboard, though most have not been publicly identified.

UK to hold its own emergency meetings

UK Home Secretary Priti Patel, whom Paris uninvited to the Calais meeting, said she will hold her own emergency meetings.

"More international cooperation and passing our Borders Bill quickly into law will stop the people smugglers and save lives," she tweeted.

"I am sorry not to be at a meeting with European ministerial counterparts today to discuss this pressing issue," she wrote in a column for The Sun tabloid, adding that "the Prime Minister and I stand ready to discuss proposals with our French counterparts at any time."

Patel already met with Dutch Migration Minister Ankie Broekers-Knol and stressed "the need for European partners to work together" through shared intelligence and joint police initiatives, according to her office.

"Both agreed that return agreements are essential for breaking the criminal business model," it said.

At camps along the French coast, clusters of people from Sudan and Kurds from Iran and Iraq huddle under the chilly rain, waiting for their chance to cross the Channel. They’re undeterred by Wednesday’s deaths or the stepped-up beach patrols.

The number of migrants trying to cross the channel in small boats has jumped this year, amid pandemic travel restrictions and after Brexit.

Overall, however, the number of migrants arriving in Britain is low compared with other European countries.