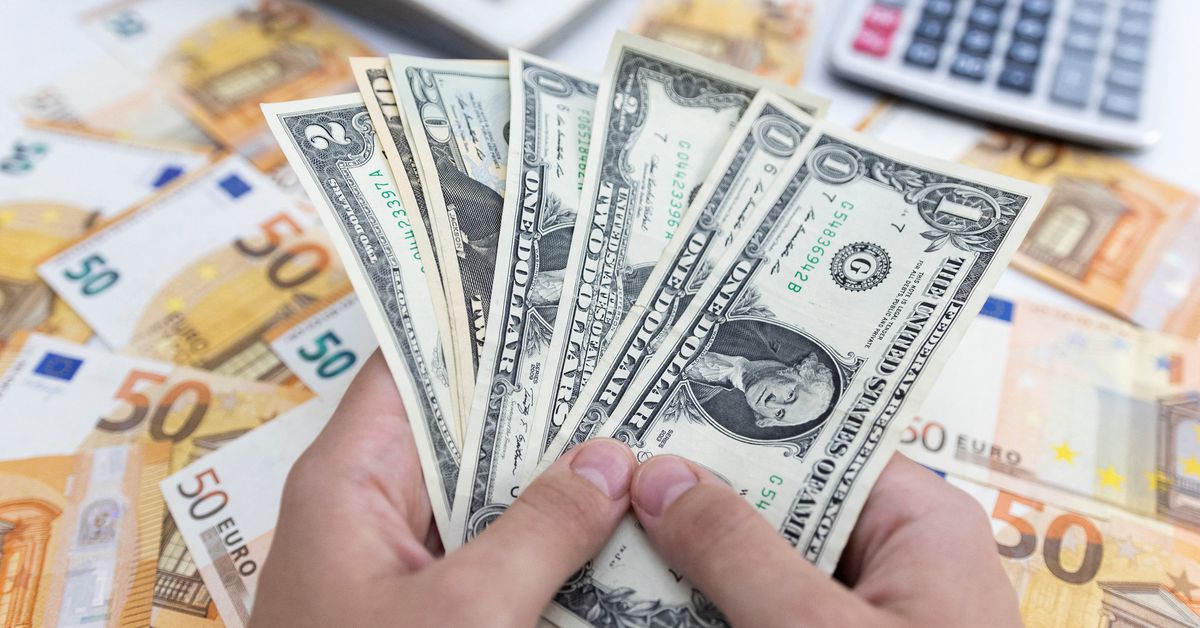 The euro struggled to regain its footing on Thursday after tumbling overnight against a resurgent U.S. dollar, which benefited from safe-haven demand on renewed worries about higher rates and a global recession.
The common currency was at $1.0453, up 0.13% on the day, after losing 0.75% on the dollar the day before. It looked set for a monthly decline of 2.7% and a quarterly loss of 5.5%.
It also dropped to a fresh 7-1/2-year low versus the Swiss franc at 0.9963 francs early in the Asia session on Thursday, with the Alpine currency another beneficiary of safe-haven flows and also still basking in the afterglow of the Swiss National Bank's surprise rate hike two weeks ago.

Christopher Wong, senior FX strategist at Maybank, attributed the euro's fall against the dollar to the market moving away from riskier assets after "central bankers warned of lasting inflation and that they would prioritise combating (it), resulting in broad dollar rebound overnight."

A steady and aggressive global switch to tighter policy has stoked recession worries and shaken financial markets in recent months.

Speaking on Wednesday at the European Central Bank's annual conference in Sintra, Portugal, U.S. Federal Reserve Chair Jerome Powell said it was important to bring down inflation, even if it meant economic pain, with similar remarks from ECB President Christine Lagarde.

Lower German inflation figures also briefly weighed on the euro, said Ray Attrill head of FX strategy at National Australia Bank, before "the market realised that there was some special factors there, it wasn't a genuine downside surprise."

"The bigger picture worry is what happens with energy supplies in the eurozone as we head towards the winter... We're quite cautious about the euro," Attrill added.

The dollar remained on the front foot against other majors, with sterling hunkered down at $1.2132, with losses this week leaving it set for a 3.7% monthly decline, while the Australian dollar was struggling at $0.6895.

The dollar also hit fresh a 24-year peak of 137 yen overnight, as the gap between a hawkish Fed and a dovish Bank of Japan continues to weigh heavily on the yen, which was last trading at 136.51 yen .

The BOJ is able to keep interest rates pinned down because Japanese inflation is still low by global standards, though even small price rises are causing a messaging problem for the central bank.

The dollar has climbed 12% on the yen in the three months to the end of June, its biggest quarterly gain since late 2016.

Bitcoin dipped back below the symbolic $20,000 level on persistent market ructions, and was also hurt by the U.S. Securities and Exchange rejecting a proposal to list a spot bitcoin exchange-traded fund by Grayscale, one of the world's biggest digital asset managers.