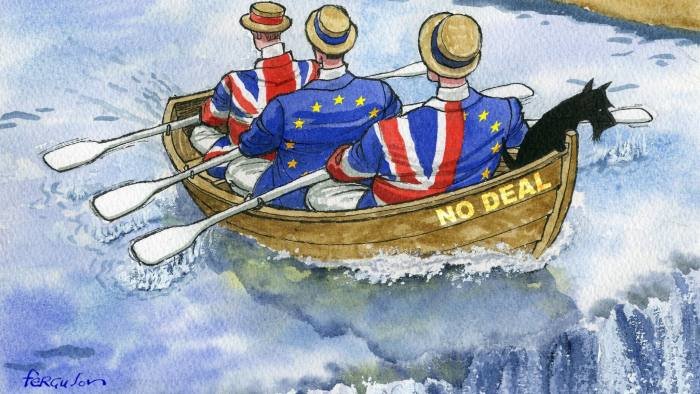 BREXIT and international trade disputes have butchered the EU economy, which has grown by just half of what it had done the previous quarter, new figures indicate.

The gross domestic product (GDP) for the eurozone has chugged along at just 0.2 percent compared to the previous quarter, German publication Finanz and Wirtschaft reports. In the second quarter of the new year, the eurozone economy’s growth was stunted due to weaker global activity put down to trade disputes with US President Donald Trump. Brexit uncertainty after top eurocrats refused to budge on the Irish backstop with former Prime Minister Theresa May was also to blame.

The Berlin DIW Institute expects “little more than stagnation” after Germany and France both grew by 0.2 percent despite being the largest economies in the EU.

There are concerns that a hard Brexit could spark an economic crisis throughout the eurozone.

Nicola Nobile, lead eurozone economist at consultancy Oxford Economics, said: “The eurozone data today confirm that the economy has moved down a gear as worsening external conditions and the increase in uncertainty continue to take their toll.

“Looking forward, the continued weakness in eurozone surveys suggest that a robust pick-up in GDP growth in H2 2019 is not on the cards.”

Meanwhile Britain’s was recorded at 0.3 percent.

It was expected the eurozone would record a 0.4 percent growth as it did the previous quarter.

As a result of the economic slowdown, the European Central Bank (ECB) has signalled further easing of its monetary policy.

ECB chief Mario Draghi said several options are in the process of being considered.

These include the resumption of bond purchases to higher penalties for borrowers.

Eurostar cited trade conflicts and Brexit as reasons behind the slump in growth across the board.

The European Commission said as result of threats from both Boris Johnson over a no deal Brexit and President Trump over tariffs linked to a trade spat with the bloc, Brussels is only expecting economic growth of 1.2 percent for the year as a whole.

The Commission predicts this should increase to 1.5 percent in 2020.

Despite this, Europe’s unemployment rate has fallen to its lowest level in 11 years.

Less than 12.4 million Europeans are unemployed, 45,000 less than in the previous month.