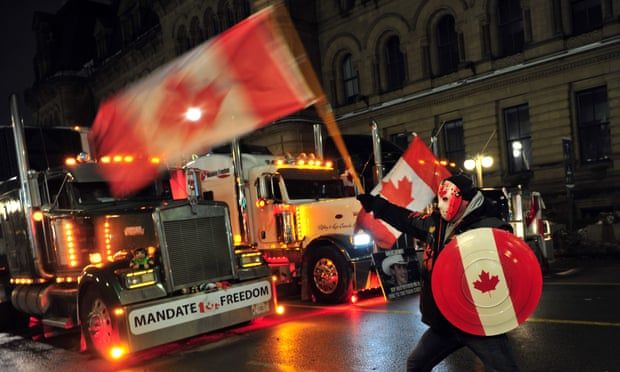 The blockade of Ottawa has sparked copycat action around the globe, and such disparate demonstrations of grievance may prove hard to shut down

It only took six dozen trucks, and a few hundred protesters to bring Canada’s capital to a standstill and close a critical border crossing with the US, throttling the car industry that straddles the line between both countries and relies on a constant flow of trade.

On Saturday, Canadian authorities finally began taking action to clear the Ambassador Bridge into the US, the busiest land crossing in North America, which had been blockaded by just over a dozen trucks and smaller vehicles, and a crowd a few hundred strong.

The bridge has been closed for the best part of a week now, and meanwhile downtown Ottawa has been under a form of siege for more than a fortnight, blockaded by crowds gathered under the banner of opposition to Covid regulations.

The protest has melded genuine grievances and fears about how the pandemic has upended lives with conspiracy theories and racist extremism, helped by some degree of funding from abroad. A handful of demonstrators have turned up with Trump banners and Confederate flags.

The seductively open-ended rallying call for a “freedom convoy” has sparked an unlikely global movement. Around the world other police forces were moving this weekend to clear or block copycat actions.

In New Zealand, the parliament Speaker, Trevor Mallard, used a sound system playing Barry Manilow songs to tackle a gathering in Wellington, and in France thousands of police fanned out to motorway tollbooths around Paris to stop a “convoi de la liberté” from getting into the city, and used teargas on protesters in the Champs-Élysée.

“The right to demonstrate and to have an opinion is a constitutional right guaranteed in our republic and in our democracy the right to block others or stop them from coming and going is not,” said prime minister Jean Castex. “If they block the traffic or try to block the capital we will be very strict.”

In North America, authorities are drawing up longer-term plans to tackle truck convoys, whose organisers have floated the idea of trying to barricade events from the Coachella music festival to the Super Bowl, and mooted a convoy from California to Washington DC.

The protest in downtown Ottawa that thrust Canada into an unwelcome international spotlight may prove harder to dismantle, and the shockwaves from the last two weeks may prove harder still for the country’s political class to shrug off.

The protesters are a tiny minority in a country which has, on the whole, embraced the protection against Covid offered by science. Canada has one of the highest rates of full vaccination anywhere in the world, with more than 80% of people covered.

The truckers are also a minority in their profession. The union Teamsters Canada, which represents 15,000 drivers, has also denounced “despicable displays of hate” at the protests, which it said did not represent “the vast majority of our members”.

But the trucks form an obstacle that is much harder to move from the freezing streets than the crowds of individual protesters or smaller vehicles that police might have faced in the past. A state of emergency has been declared, residents have launched legal action against protesters and prime minister Justin Trudeau has moved out of his official residence. 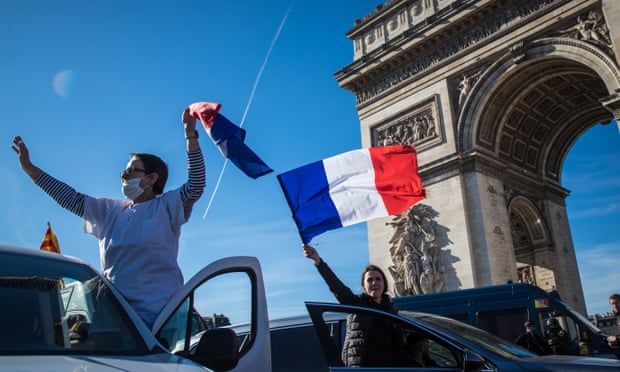 The ‘freedom convoy’ in Paris at the weekend.

Police are meant to be trying to choke off the group by keeping food and fuel supplies out of the main protest zone, although they are taking limited action on the ground. A bank has frozen their funds and two sites, GoFundMe and GiveSendGo, shut down their fundraising.

But several protesters told the Observer that the rights they were fighting for were worth any financial hit. Rebecca, who did not want to give her last name, lives near the protests and has joined them regularly. She has been on unpaid leave from her government job for months, after a request for a vaccine exemption on religious grounds was rejected. “I am a human rights activist. I don’t think that vaccines should be mandated for people to keep jobs. And that is the primary reason I’m down here,” she said.

That sense of a heroic mission, also fuelled for some people by conspiracies such as QAnon, may make these protests far harder to end than demonstrations on behalf of specific political demands.

“[They think] ‘We’re here to save you, we’re here to wake up the sleeping masses to the true reality of what’s going on.’ They’ve become heroes in their own story,” said Amarnath Amarasingam, an associate professor at Queen’s University in Ontario who specialises in social movements and extremism.

“I don’t think that’s a challenge for security reasons from a terrorism perspective … But I think it does have an impact on how long this goes for because it’s not simply something you can negotiate with and say, ‘OK, the mandates will disappear’ or ‘this will go away, you can go home now.’” 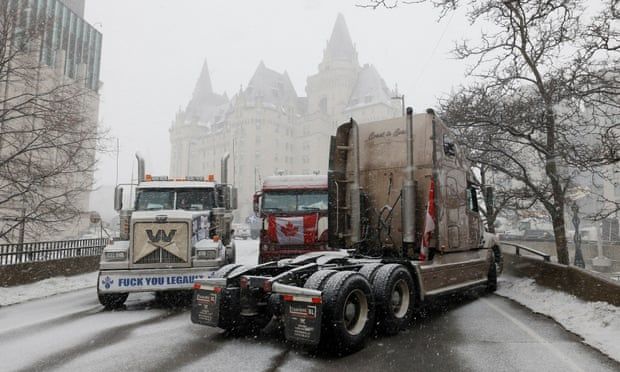 Lorries block streets in Ottawa at the weekend as truckers continue to protest against vaccine mandates.

The nature of the protests meant they presented an unprecedented policing challenge for authorities, said Scot Wortley, a criminology professor at the University of Toronto. “Perhaps the closest thing we’ve had would be the uprising on 6 January in the US. So to say, ‘Oh, [Ottawa’s police chief] should have followed some kind of rulebook or some kind of strategic plan,’ I think that’s unrealistic,” he said.

That insurrection in Washington DC was a reminder of how internet conspiracy theories, harnessed to a political cause, can erupt into mainstream political reality and permanently alter it.

There, as in the Canadian protest movement, the crowd included advocates of the extremist QAnon conspiracy theory.

In the Ottawa protest’s first days, QAnon’s self-proclaimed “Queen of Canada”, Romana Didulo, burned a Canadian flag outside parliament. She has previously called for the extermination of parents who vaccinate their children.

The Canadian protests have given a disturbing platform to a range of other dark fringe views, amplified by genuine concerns. “Nominally protesting against vaccine mandates, the freedom convoy represented a medley of real, imagined and exaggerated issues bound together by a common sense of alienation and grievance,” Daniel Panneton, an online hate researcher, wrote in an editorial for the Globe and Mail.

“[It] included a motley array of Western separatists, anti-vaxxers, conspiracy theorists, antisemites, Islamophobes and other extremists. This wasn’t a surprise to anyone who’d been paying attention: Several of the convoy organisers have a history of white nationalist and racist activism.”

Convoy organisers named in a class-action lawsuit by Ottawa residents who say their lives have been unreasonably disrupted include Tamara Lich, who until recently had a role in a separatist party; Pat King, a conspiracy theorist who has shared racist tropes, and Benjamin Dichter, a podcast producer who has been sued for allegedly spreading Islamophobic smears.

Even if the few Trump signs and Confederate flags have captured media attention, it is the Canadian flag that has become the symbol of this movement. The red maple leaf is painted on the sides of trucks, tied around people’s necks as capes, embroidered into their hats and carried in children’s tiny hands. And the country has extremists of its own.

“Be cautious of amplifying ideas that this is a foreign funded/organised movement. This occupation movement is Canadian, made up of Canadians, organised by Canadians,” the Canadian Anti-Hate Network tweeted last week. 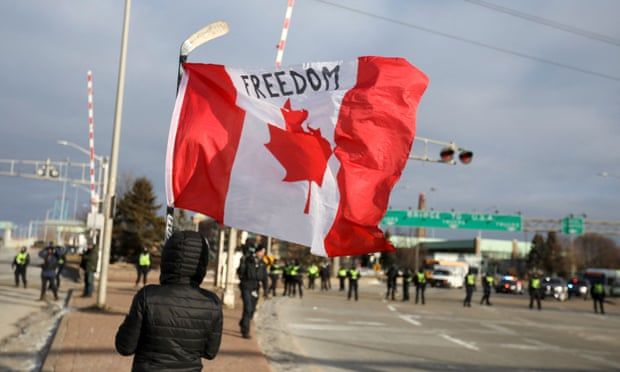 Yet while it would be naive to write these protests off as a simply an organic expression of legitimate political grievances, it would also be unwise to view them as entirely politically confected, or driven by foreign forces or cash.

Scott, who owns a farm equipment business outside the city and didn’t want to give his last name, said he came to check out the protests with his son.

He was sceptical about the decision to paralyse Ottawa, but has concerns about the government vaccine mandates. He disagrees with protesters now, mostly because he says the blockade is distracting attention from their key cause.

“I think that there’s an awful lot of Canadians that are very quiet, like myself, on this that probably are more in support,” he said.

“[That said] I don’t support them being downtown any more with their trucks,” he said. “I think that, you know, the underlying message has just been discredited and discounted and pushed off to the side.”

Leaders around the world faced with protests like the ones in Ottawa are trying to balance the need to combat extremism they are spreading with recognition that their leaders are tapping into very real fears and sadness.

Emmanuel Macron called for those taking part in the French convoy to be calm, while saying he “has heard and respects” the discontent caused by the health crisis. “We are all collectively tired of what we have been living through for the last two years. This fatigue shows itself in different ways; in confusion for some, depression for others. And sometimes that fatigue manifests itself in anger.”

He added: “We have always maintained the right to protest, democratic pluralism and parliamentary debate.” 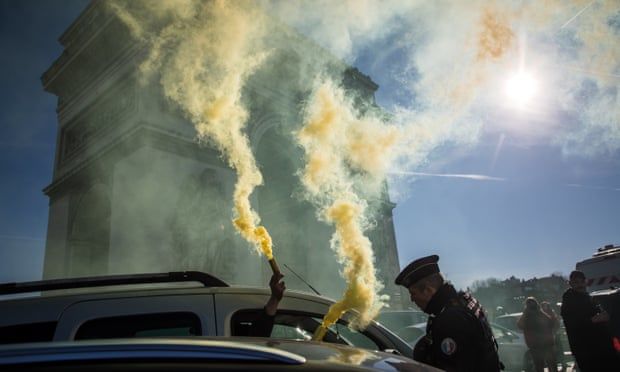 The freedom convoy in Paris.

In New Zealand, a convoy of roughly 1,000 protesters that converged on parliament’s lawn and its surrounding streets on Tuesday had dwindled by Friday to a few hundred people.

They claimed they would not leave until the prime minister Jacinda Ardern committed to scrapping vaccine mandates, but as in Canada the vaccine seemed to be serving as a Trojan horse for a range of other grievances. At one point a protester drew a swastika on a statue, and others scrawled “hang em high” on the steps of parliament.

Cars were scrawled with various slogans: “We stand with Ottawa” and “drain the swamp”, from the Trump era, among them.

The threat of that rhetoric exploding into violence was acknowledged by parliament and the country’s counter-terrorism services in November last year.

Associate Professor Grant Duncan, who specialises in politics at Massey University, said legitimate concerns and questions over the mandates were getting lost in the quagmire of conspiracy and abusive language.

“It’s particularly perplexing, really, to see that kind of Trump-related rhetoric and QAnon-related rhetoric alongside flags displaying symbols of Maori independence – it’s a jarring juxtaposition,” Duncan said, even if there was good reason to have a debate about the vaccine mandates in a democratic society.

In a rare display of unity, not a single politician went out to meet the protesters, which Duncan said showed that both parliament, and the New Zealand population generally, had “almost zero support for this protest … This is a loud minority.”