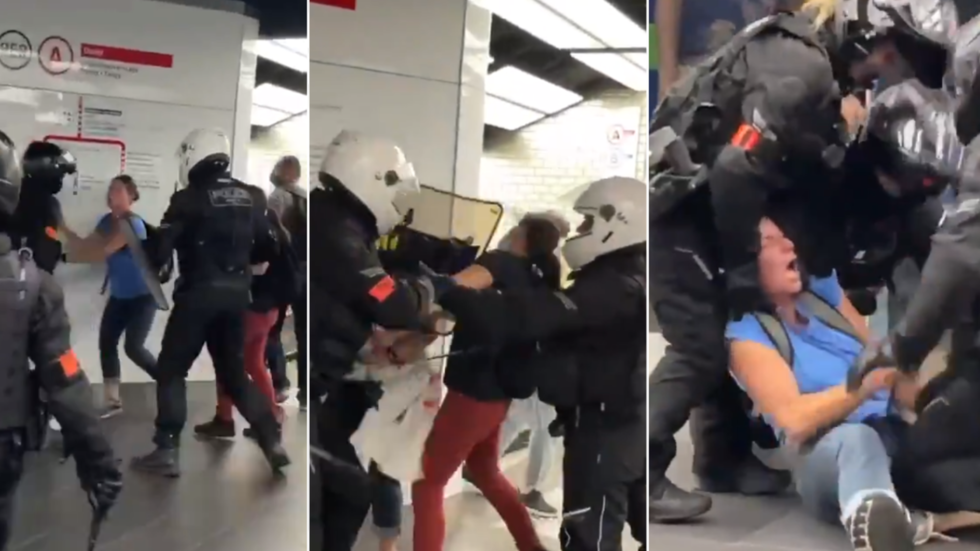 French riot police officers have been scolded for brutally arresting two women, after backing away when confronted by a big group of protesters against the so-called coronavirus health passes, who stormed a mall in central Paris.

Hundreds of people forced their way into the Forum des Halles shopping center on Saturday, amid a nationwide string of demonstrations against the Covid-19 restrictions and mandates. The group was seen chanting ‘Freedom!’ inside the mall, which is partially underground and connected to the metro transit hub of Chatelet–Les Halles.

To restore public order, authorities deployed a riot police unit, BRAV-M, a French acronym for the Motorized Brigades for the Repression of Violent Actions – even though the crowd was not even technically defying the ban on entering shopping centers without a health certificate, since Forum des Halles is one of a handful of Paris venues exempt from the coronavirus pass mandate.

At one point, the riot cops trying to quell the crowd were “forced to leave the shopping center under pressure” from the demonstrators, according to journalist Clement Lanot.

Multiple videos showed tensions running high, but no direct clashes between the protesters and police. The crowd eventually dispersed peacefully, with no injuries and no damage reported, according to BFMTV.

French media said only three people were arrested inside the complex for “violence and insulting the police” – but a purported video of the arrest caused a torrent of outrage and indignation.

In one of the clips widely shared online, at least half a dozen officers in full riot gear with batons and shields are seen rushing inside the underground station, ganging up on two women and knocking one of them down to the ground. One of the cops is also seen pushing the camera operator aside.

While it’s unclear why the women were arrested, the brutality of the response was almost unanimously denounced as excessive. Many called the officers “cowards” who were not that brave in the face of a larger crowd. Others quipped sarcastically that women might feel safer in Kabul, Afghanistan.

In total, an estimated 140,000 people took part in more than 200 rallies all across France on Saturday, for the eighth consecutive weekend in a row. The rallies began in mid-July after President Emmanuel Macron’s government introduced a system that made presenting a vaccination certificate or negative Covid-19 test obligatory for those wishing to visit a restaurant, theater, cinema or shopping mall, or travel on a long-distance train.

The authorities maintain that the measure is needed to encourage people to get the jabs and eventually avoid another lockdown. Just over 60% of French citizens have been fully vaccinated, and those who haven’t got the shot yet, or are not planning to at all, say that the health pass diminishes their rights and turns them into second-class citizens.