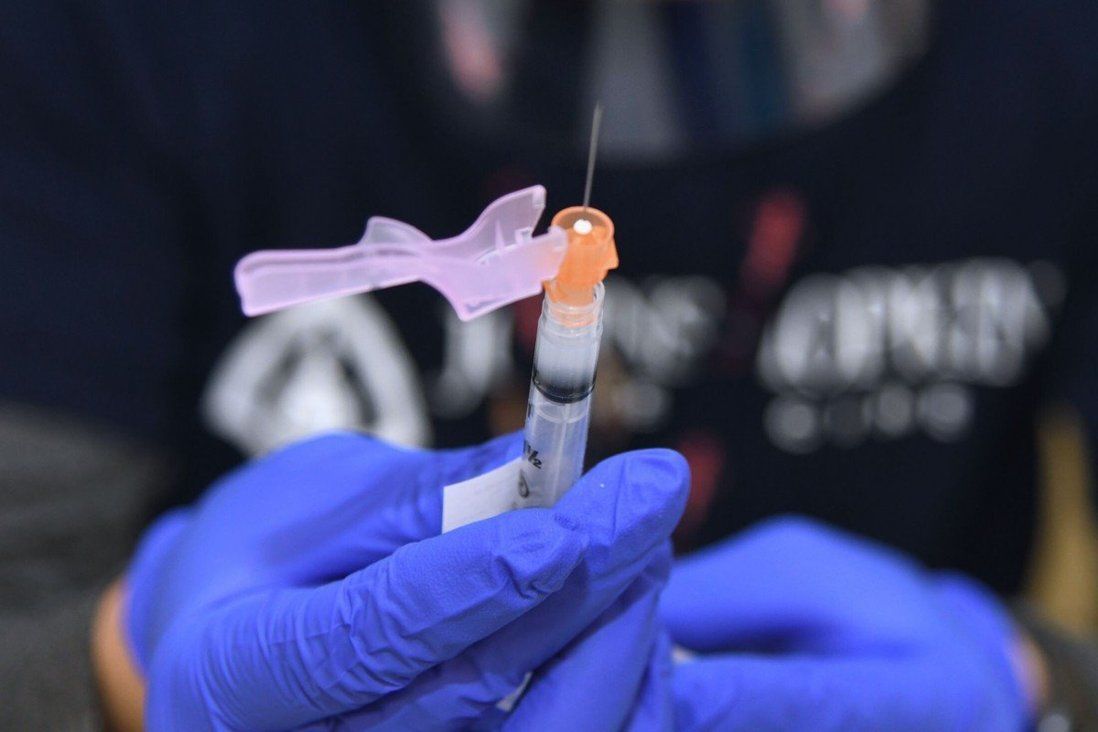 From free flat to cash prizes – what will it take to sell Covid-19 jabs?

Time off work, free air tickets and lucky draws for cash are just some of the inducements being offered to people still hesitating to take their shots.

Hong Kong property tycoons on Friday joined forces to hold a grand lottery, dangling a top prize of HK$10.8 million (US$1.4 million) in the world’s costliest housing market as an incentive for hesitant residents to get vaccinated against Covid-19.

A lack of trust in the government and concerns over rare side effects have led to a sluggish vaccination roll-out in Hong Kong. As of Friday, the take-up rate for the first vaccine dose was 17.6 per cent, and the figure was 12.9 per cent for both shots among the city’s population of 7.5 million people.

At a daily rate of 28,564 doses administered, it would take an estimated 10 months to cover 75 per cent of residents.

The Post explores other incentives made available in the city before Friday’s bold move by tycoons, as well as measures rolled out by other governments to give their vaccination drives a shot in the arm. 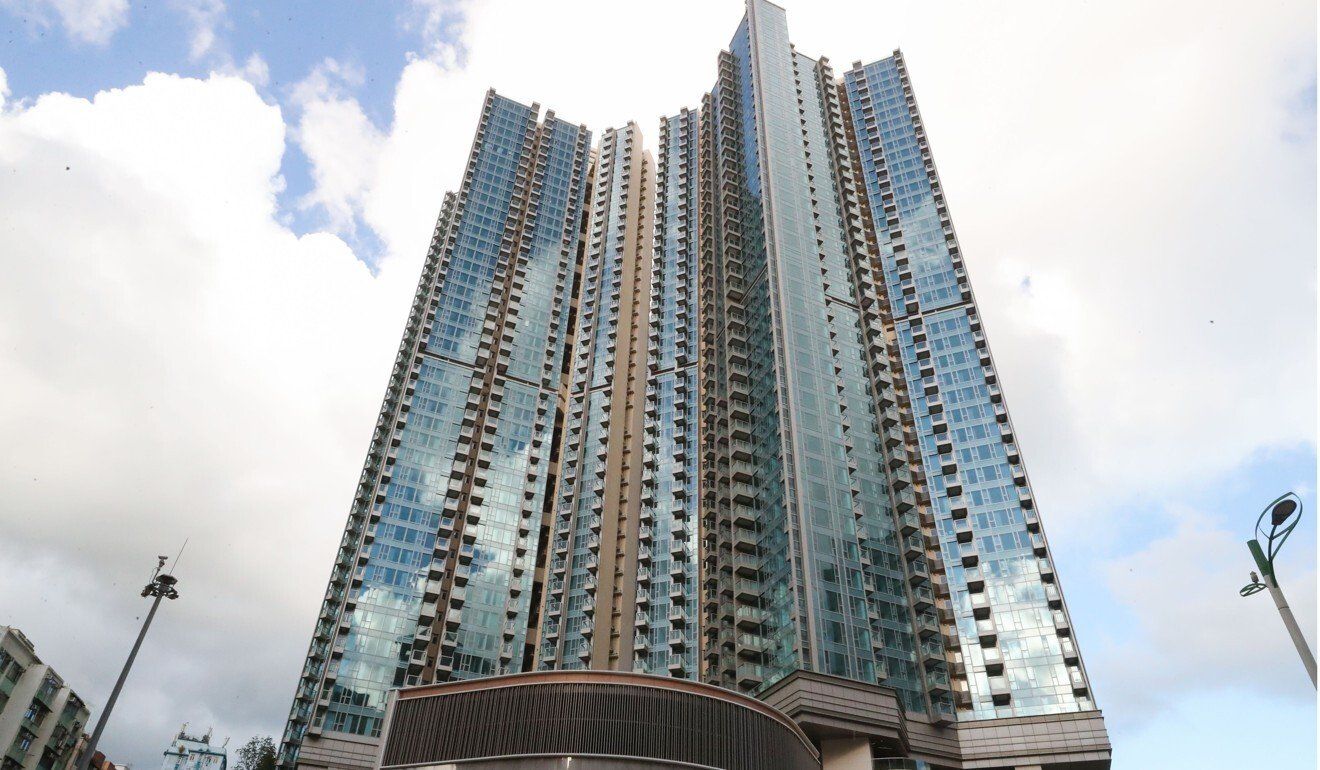 Winning cash or a flat are among the gimmicks local governments and private enterprises have introduced to incentivise people to get vaccinated worldwide.

All residents aged 18 years and above who hold a Hong Kong permanent identity card and have received both doses of their Covid-19 vaccine
will be eligible for the chance to become a homeowner, a far-fetched dream for many given the city’s exorbitant rents and home prices.

Sponsors of the bonanza will also donate 20 prizes with a prepaid or credit card value of HK$100,000 each.

Share of population that has received at least one vaccine dose 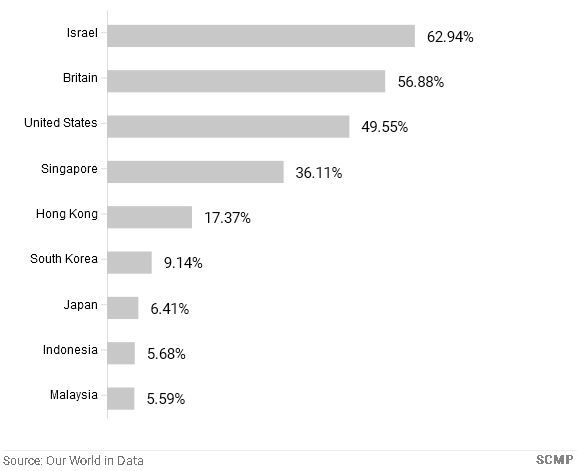 In the United States, cash prize lotteries have been going on in at least three states in a move to encourage people to roll up their sleeves and get vaccinated.

Some 62 per cent of American adults have received at least one vaccine shot and about half of adults were fully vaccinated as of Thursday, according to data tracked by the US Centres for Disease Control and Prevention.

US President Joe Biden
set a goal on May 4 to push the rate up to 70 per cent by July 4 – the Independence Day holiday.

Abbigail Bugenske, a 22-year-old college graduate was the first winner of Ohio’s “Vax-a-Million” sweepstakes. She won US$1 million in the statewide lottery, which at first she thought was a prank, The New York Times reported on Thursday. The five-week contest is open to all residents who have received at least one Covid-19 vaccine shot. 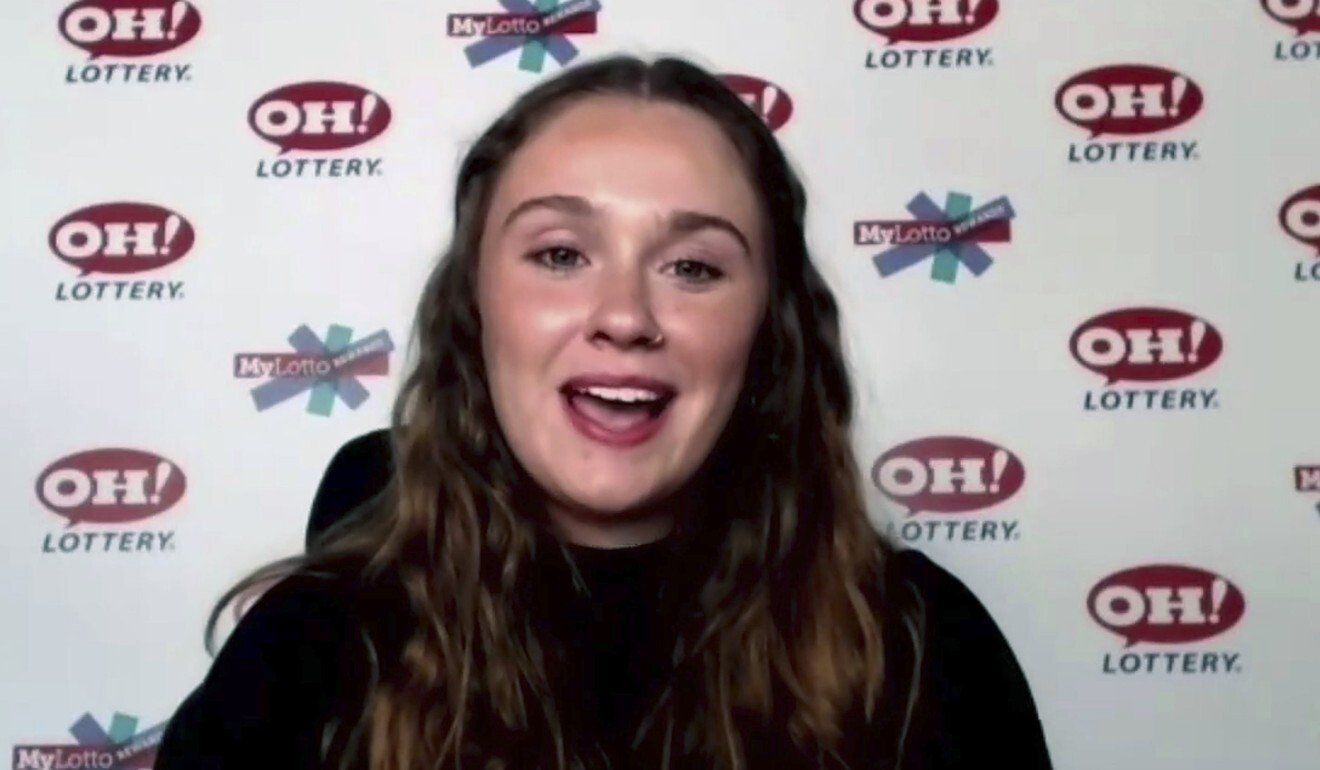 California has launched the largest Covid-19 vaccine lottery in the US, with a top prize of US$1.5 million to 10 lucky winners who have received at least one vaccine shot. State residents will also be eligible for a total of US$116.5 million in prize money in a bid to get America’s most populous state to get vaccinated.

In Maryland, the state lottery will be drawing a cash prize of US$40,000 for 40 consecutive days for people who have been vaccinated against the coronavirus. The final draw, on the July 4 holiday, will be worth US$400,000 for one lucky winner.

Freebies from flight tickets to beer

The Hong Kong Airport Authority on Monday unveiled a lucky draw of 60,000 flight tickets open to Hong Kong residents and airport staff who receive their Covid-19 vaccination before the end of September. The authority said 50,000 tickets would be allocated for residents, while the rest would be for airport staff.

Ocean Park chairman Lau Ming-wai said on Thursday the theme park would be open to offer incentives for residents but stopped short of announcing details.

In the United States, vaccinated New Yorkers can get free tickets to attractions such as the Bronx Zoo, the Brooklyn Botanical Garden and a free ride on the subway. Local breweries in New Jersey are giving residents with at least one vaccine dose a free beer in May, while more than two dozen eateries at Miami Beach are offering free drinks and a series of discounts.

In Dubai, three restaurants under Gates Hospitality are offering 10 per cent discounts to residents who have received their first shot and 20 per cent off if they had taken two doses. 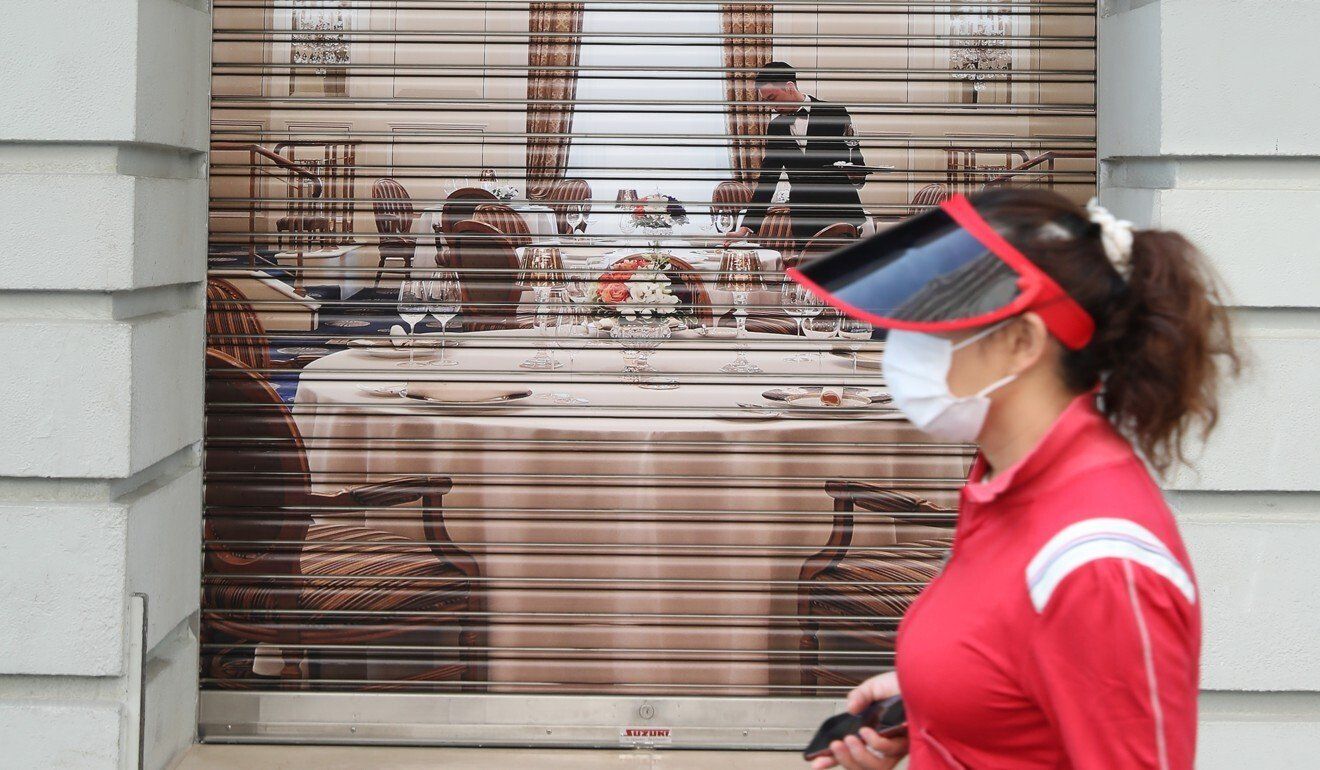 A luxury restaurant at the Peninsula Hong Kong. The hotel chain is offering cash and benefits to employees who get vaccinated.

Businesses in Hong Kong have also offered a range of perks to get staff vaccinated, in hopes of kick-starting the recovery of the battered services sector.

Hong Kong is among several places in Asia that have largely kept its infection caseload low and deaths to a minimum but have struggled to reopen.

Billionaire Michael Kadoorie’s Hongkong and Shanghai Hotels, which runs the luxurious Peninsula Hotels chain and the iconic Peak Tram, was offering its 1,500-strong workforce cash and benefits to get vaccinated.

The hotel group was offering employees HK$2,000 (US$258) to get the jabs. If the group reaches a vaccination rate of 70 per cent for its staff, an additional HK$2,000 will be dished out to employees who complete their vaccination by August 31.

Meanwhile, staff at the Airport Authority would be eligible to take a total of three days off starting April 20 if they get vaccinated.

The Hong Kong Construction Association was also aiming to boost its vaccination rate through making use of the government’s vaccine outreach programme, according to the group’s president Eddie Lam Kin-wing.

The association was coordinating with the government, and outreach teams to administer either the German-made BioNTech jab or the Chinese-produced Sinovac vaccine across dozens of construction sites in Kai Tak as part of a trial run.

On May 21, the government’s outreach team administered BioNTech vaccines to 170 employees of accounting firm Deloitte at their office in Admiralty.

Hong Kong cut its 21-day mandatory quarantine for most vaccinated inbound travellers starting May 7, depending on the risk classification of the passenger’s country of origin.

Fully inoculated people who arrive from low-risk countries, such as Australia and New Zealand will need to undergo seven days of hotel quarantine and another seven of self-monitoring, with a test on the 12th day upon arrival.

Vaccinated travellers from medium and high-risk countries, such as the United States and Canada, will have to quarantine for 14 days at a designated hotel plus seven of self-monitoring and compulsory tests on the 16th and 19th day upon arrival. 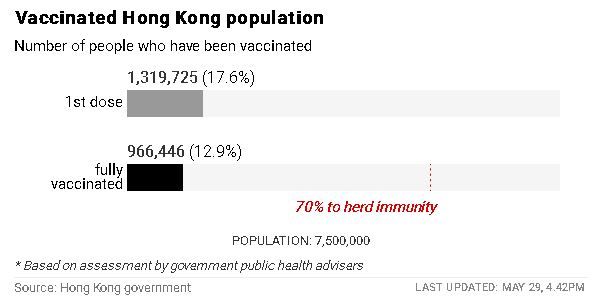 The isolation period was shortened from 14 days at a government facility to a self-monitoring period of seven days for those who had received two vaccine doses if they were found to be close contacts of coronavirus cases.

If the confirmed infection involved more virulent mutated strain, fully vaccinated people had to be sent to government facilities for 14 days of quarantine and a week of self-monitoring.

Bars and nightclubs were allowed to reopen after more than four months of closure if all staff and customers had received at least one vaccine shot and used the government’s risk-exposure “Leave Home Safe” app.

Under the multi-tiered system – which drew immediate industry backlash due to the overcomplicated rules – those who had been vaccinated would be allowed to dine out in groups of six or eight at restaurants.

If all restaurant staff had received at least one vaccine dose and customers used the government’s app, up to six people would be allowed at each table until midnight, compared with four people per table who must leave at 10pm.

Restaurants could welcome tables of eight people and stay open until 2am, provided employees were fully vaccinated and patrons had received at least one jab.