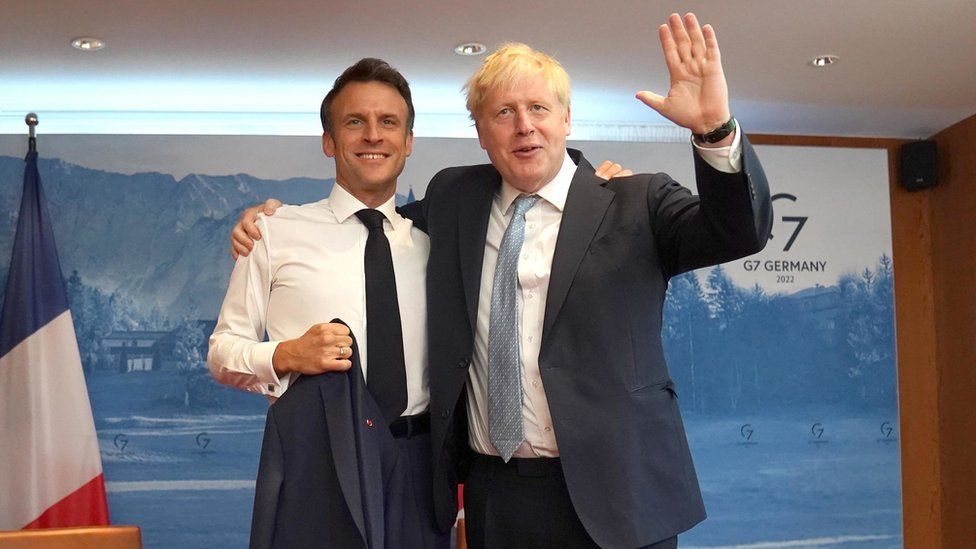 Amid the beauty of the Bavarian mountains and fields, a fundamental truth is immediately striking at this G7 Summit.
When a collection of democracies gather, each national leader is flexing to the political and public mood back home, subtly, sometimes strikingly different from one country to the next.

The G7 has an opponent in Russia, whose leader faces no such democratic pressure, and is acutely savvy about the weaknesses, as he might see them, of the western model of governance.

Amid the security and the choreography, the grip and grin photo ops and the alpine backdrops, the differences of emphasis between the G7 countries, and their desire to project a collective impression to the wider world is worth exploring in turn.

The prime minister, as we know, arrives here with domestic political issues having chased him north from the Commonwealth summit in Rwanda.

It'll probably chase him to the summit of the Nato defence alliance in Spain in a few days too.

He is out of the country for a week, while Conservatives back home from the cabinet speculate privately about his future.

But other leaders face domestic political pressures too.

Take President Emmanuel Macron of France, for instance. A few months after being re-elected as president, he's lost control of the French National Assembly.

The British government feel Germany and in particular France are feeling the domestic political pressure of some of the consequences of the Ukraine war - not least spiralling prices.

After Boris Johnson's meeting with President Macron, Downing Street told us: "The prime minister stressed any attempt to settle the conflict now will only cause enduring instability and give Putin licence to manipulate both sovereign countries and international markets in perpetuity."

Foreign Secretary Liz Truss co-wrote something very similar, with her Ukrainian counterpart, in the Sunday Telegraph.

Publicly, No 10 insists President Macron has done "huge amounts" to support Ukraine, but privately there is concern Paris is losing appetite for the long-term slog of the war, and its costs.

Beyond the internal G7 diplomacy, there are then the efforts being made together to reassure countries beyond the group, some of whom blame western sanctions as much as Russian aggression for rising prices, as my colleague James Landale writes about here.

Argentina, India and South Africa are among the other countries invited here to join discussions.

I'm told that tomorrow a quad of key countries will meet here - the United States, France, Germany and the UK.

Those around the prime minister talk about the need for a "gear change" on sanctions, and they believe the new ones on Russian gold contribute to this, and a "game changer" on military support, which will be talked about more at the Nato summit in Madrid.

Getting there, this week and beyond, will require persuasion and patience. And it comes at a cost.
#Boris Johnson  #Johnson