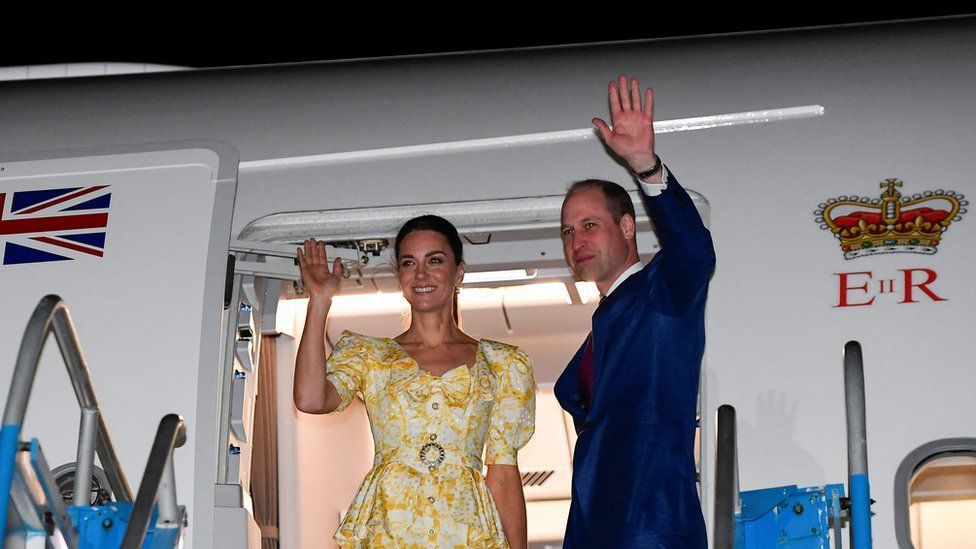 A royal disaster: William & Kate in the Caribbean

Prince William and Kate are in the Caribbean to mark Queen Elizabeth's platinum jubilee. The visit has been criticised as a PR disaster by royal watchers in Britain.
In Belize, a visit to a cocoa farm was scotched after residents protested. In Jamaica, the prime minister declared his country was “moving on” from the British monarchy. In the Bahamas, the couple arrived to demands from a group calling for slavery reparations that they acknowledge Britain’s economy “was built on the backs of our ancestors.”

For Prince William and his wife, Catherine, Duchess of Cambridge, it has been a turbulent tour of the Caribbean — one that has dramatized, through a pileup of gaffes and miscues, how rapidly Queen Elizabeth II is losing her grip on these distant dominions, even when she sends her most popular proxies.

Barbados cast off the queen as head of state last November, and Jamaica seems emboldened to follow suit, though it would require a referendum to amend the island’s constitution. William, second in line to the throne, got a taste of how the mood toward the monarchy has changed in the wake of the Black Lives Matter movement and a renewed call for reparations for Britain’s role in the slave trade.

“We intend to fulfill our true ambitions and destiny as an independent, developed, prosperous country,” Jamaica’s prime minister, Andrew Holness, said on Wednesday as a po-faced William looked on.

On many stops of their tour, the couple was greeted warmly, even jubilantly. But even those encounters were marred by off-key images. During a military parade, William, resplendent in a white dress uniform, rode with his wife, also in white, in the same open-top Land Rover that carried the queen and Prince Philip in 1962. To some locals, it was a caricature of a colonial proconsul inspecting his troops.

In Trench Town, the Kingston neighborhood famous as the home of Bob Marley, the couple tried their hand at reggae and mixed with friendly crowds. But the enduring image of the stop was likely to be them touching the fingers of children stretched through a chain-link fence — the kind of public-relations gaffe that afflicts other members of the royal family but has rarely tarnished this couple.

The dissonance is about more than poor stagecraft, according to scholars and royal watchers. Sentiment toward the royal family has shifted perceptibly in the Caribbean since the killing of Black people by the police in the United States inflamed a long-simmering debate in Britain and its former colonies about the legacy of empire. Barbados’s decision to remove the queen was a tipping point.

“Barbados is seen as the conservative of the Caribbean,” said Richard Drayton, a professor of imperial history at Kings College London, who spent his childhood on the island. “So, when Barbados takes a step like this, it creates space for other Caribbean countries to move in that direction.”

Both major political parties in Jamaica support becoming a republic, though there are legal hurdles that make it more complicated than in Barbados. Guyana led an earlier wave of republicanism in the Caribbean, dissolving its ties to the queen in 1970. Trinidad and Tobago followed in 1976, and Dominica in 1978.

Elizabeth, 96 next month, remains head of state of 15 countries in the Commonwealth. While she has a reservoir of popularity in the Caribbean, particularly among older people, Professor Drayton said many were impatient for a public acknowledgment by the monarchy of its role in the slave trade, which was conducted under royal imprimatur by the Royal African Company in the 17th and 18th centuries.

William’s father, Prince Charles, spoke candidly about the stain of slavery when he was on hand for the ceremony at which Barbados became a republic. By all accounts, William went even further, though he stopped short of a formal apology.

“I want to express my profound sorrow,” he said at a dinner in Jamaica. “Slavery was abhorrent, and it should never have happened.”

Given the charged atmosphere, Professor Drayton said Buckingham Palace miscalculated by choreographing the couple’s visit as a traditional royal tour. The idea was to send William and Catherine, who are among the most popular royals in opinion polls, to represent the queen during her Platinum Jubilee (she stopped traveling overseas several years ago). Catherine, more commonly known as Kate, still got good reviews in the London tabloids.

“This is a very old strategy on the part of the royal household to cement its hold over the dominions, to make the charismatic presence of the crown visible,” he said. “The assumption they could simply send out members of the royal family to press the flesh and charm the crowds reflects a lack of clear thinking.”

The royal family has grappled with questions about race since last year, when the biracial, American-born wife of Prince Harry, Meghan, told Oprah Winfrey in a sensational television interview that a member of the family had expressed concerns about the color of their baby’s skin. Asked bluntly whether his family was racist, William said no.

While the Harry-and-Meghan show did not intrude on the William-and-Kate tropical tour, royal watchers said the repeated references to racial issues served as an illustration of what was lost when Harry and his wife gave up their royal duties and relocated to California. On a visit to Africa before the split, Meghan electrified crowds that had never seen a British duchess who looked like them.

“If this tour had been led by Harry and Meghan, it would probably have gone down a lot better than William and Kate,” said Ed Owens, a historian who has written about the relationship between the media and the monarchy. “Harry and Meghan were, if you like, the monarchy’s silver bullet, making it more palatable.”

Still, given the deeper historical trends, it is unlikely that even they would have kept the queen’s realm from shrinking further. Professor Drayton predicted Jamaica would be a republic in two years, possibly followed by Belize, though its situation was complicated by security concerns about its neighbor, Guatemala.

“The hesitations about doing this are now gone,” he said. “That particular ship has sailed.”
#Prince William