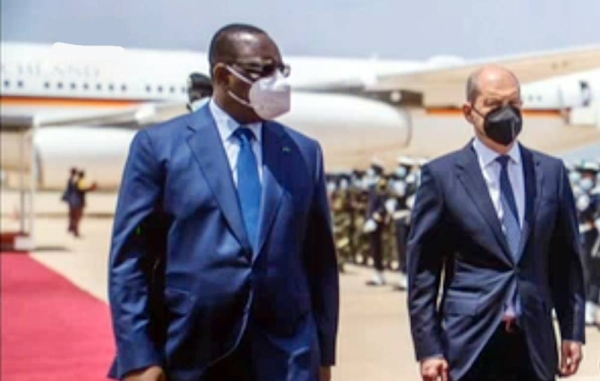 Germany wants to intensively pursue gas and renewable energy projects with Senegal, Chancellor Olaf Scholz said on Sunday during his first trip to Africa, against the backdrop of the war in Ukraine and its impact on energy and food prices.
Scholz kicked off the three-day tour in Senegal, which has billions of cubic meters of gas reserves and is expected to become a major gas producer in the region. Germany is seeking to reduce its heavy reliance on Russia for gas following the Kremlin's invasion of Ukraine. It has initiated talks with the Senegalese authorities about gas extraction and liquefied natural gas, Scholz said.

"It is a matter worth pursuing intensively," he said at a news conference with Senegalese President Macky Sall, adding that progress in the talks was in the two countries common interest. mScholz said Germany was also interested in Senegalese renewable energy projects. He did not provide further details.

Sall said Senegal was ready to work towards supplying the European market with LNG. He forecast Senegal's LNG output reaching 2.5 million tons next year and 10 million tons by 2030. In terms of gas exploration, project financing and other questions, "all that is open, and we are keen to work with Germany in this context," Sall said.

Germany has invited both Senegal, which currently holds the rotating chairmanship of the African Union, and South Africa to attend the G7 summit it is hosting in June as guest countries.

Both countries abstained from voting on a United Nations resolution against Russia's invasion of Ukraine, which Moscow calls a special military operation to demilitarize a neighbor it says threatened its security. Ukraine and its allies say the war is an unprovoked act of aggression.

Speaking as African Union chairman, Sall said many African countries did not want to take sides on the war, while condemning the invasion. "Very clearly, we want peace," he said, "we're working for a de-escalation, we're working for a ceasefire, for dialogue ... that is the African position."

Sall said he would visit Moscow and Kiev in the coming weeks. The conflict in Ukraine, a major grains and food supplier, has triggered supply disruptions that have pushed up food and energy prices in Africa.

"I expressed to Chancellor Scholz our serious concern about the impact of the war," Sall said, requesting international help to lessen the fallout for African countries.

Scholz will travel later on Sunday to Niger, from where he will fly to Johannesburg on Monday evening for the final leg of his tour.

During his visit to Senegal, Niger and South Africa, climate change, economic cooperation, the fight against pandemics and the strengthening of democracies in Africa are to be discussed.

Scholz's inaugural visit to Africa is designed to convey a bit of continuity in turbulent times. In February, Russia's invasion of Ukraine forced German President Frank-Walter Steinmeier to cut short his trip to Senegal, and Scholz's May 22-25 visit is meant to pick up that thread.

Scholz's trip begins in Senegal, then goes to Niger and South Africa. The chancellor, who has been in office for almost six months now, will make his first stops in two countries that are often seen as making important contributions toward stability in West Africa.

Both Senegal and Niger border Mali, which saw a military coup in May 2021 and whose decisions since then have seen tensions arise between itself and its African neighbors and EU partners.

Neighboring Niger, which already hosts soldiers from a number of Western nations — including some of the French troops who were previously in Mali — has the potential to be a new base for these kinds of missions. Niger's government has sent positive signals so far.

Volker Treier, the head of foreign trade at the Association of German Chambers of Industry and Commerce, told DW that Scholz's first visit to Africa is happening at just the right time. Russia's invasion of Ukraine and the ongoing COVID-19 lockdowns in China have highlighted how Germany is too dependent on some countries, Treier said, especially for energy needs.

"We need to find ways to trade with many countries in many different ways and to conclude agreements on energy and also on security policy," Treier said.

Africa has a lot to offer Germany when it comes to diversifying energy sources — and not just in terms of fossil fuels such as liquid natural gas. Senegal has recently invested a lot into solar energy and could be a pioneer in this area.

Energy will also play a big role in the last stop on Scholz's tour. South Africa was heavily dependent on coal imports and would need to diversify its power sources and move toward more environmentally friendly fuels. Since 2008, the country has had problems keeping up with energy demand.

There is incredible scope for South Africa and countries like Germany to partner and work with each other ... to seek investment, expertise, knowledge, technical know-how.

Another recent development in Africa will also be important for future cooperation, Treier said. The African Continental Free Trade Area agreement came into force at the beginning of 2021.

Treier said the agreement was similar to the European Single Market and had great potential. It would provide a better basis for German companies to invest in Africa and to create jobs, he said. It would also allow African-made products to play a greater role in international supply chains and move the continent away from simply providing raw materials.
#COVID-19  #Covid