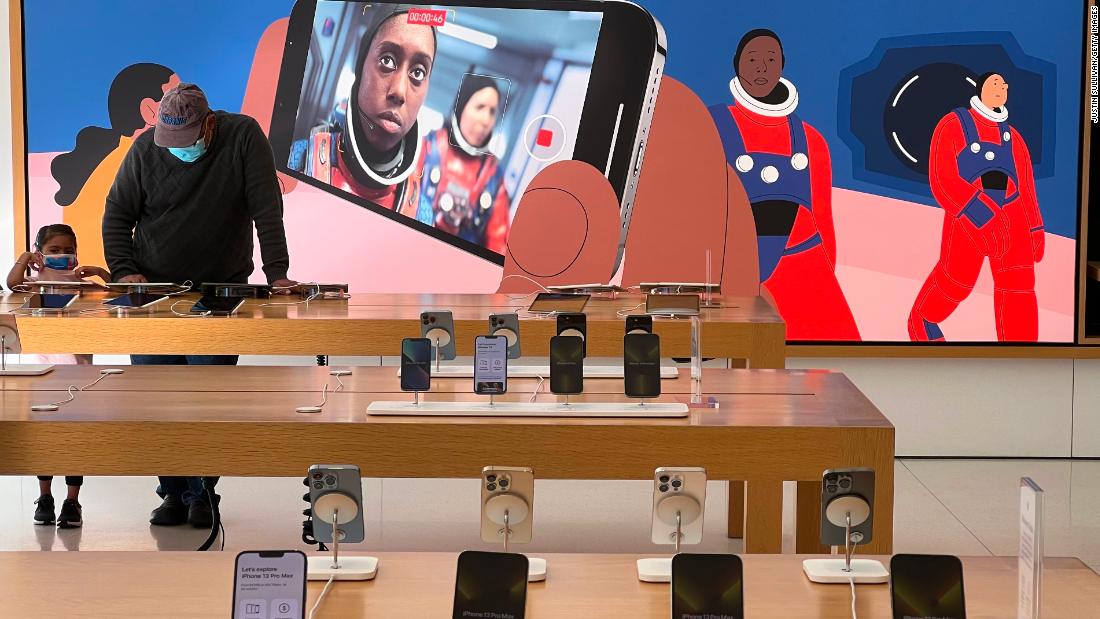 Investors in stocks have balked at the Federal Reserve's aggressive pivot as it takes a stand against inflation.

But earnings from some of the biggest companies still look pretty solid. Does that mean the sell-off of tech and other high-growth companies is overdone?

Apple: The iPhone maker, whose shares are down 10% this year, reported record revenue for its all-important holiday quarter even as it continued to grapple with supply chain shortages.

"We set all-time records for both developed and emerging markets and saw revenue growth across all of our product categories, except for iPad, which we said would be supply constrained," CEO Tim Cook said on a conference call with analysts.

The newly-released iPhone 13 powered $71.6 billion in global revenue from smartphone sales, while revenue from services — a growing part of Apple's business — rose 24% to $19.5 billion.

The company's profit totaled $34.6 billion, better than Wall Street expected. Shares are up 2.5% in premarket trading on Friday.

"With the chip shortage still a major overhang on the auto space and logistical issues globally, this impressive earnings beat speaks to an [electric vehicle] demand trajectory that looks quite robust for Tesla heading into 2022," Wedbush Securities analyst Daniel Ives said in a note to clients.

CEO Elon Musk did warn that the company would put plans for new vehicles on hold due to problems procuring components.

"We will not be introducing new vehicle models this year," Musk told analysts. "It wouldn't make any sense. We'll still be parts-constrained."

Tesla will still aim to grow vehicle deliveries by 50% this year. Investors dumped its stock on Thursday, though, sending it to a three-month low.

Microsoft: The tech company, whose shares are down 11% this year, reported revenue of $51.7 billion and profit of $18.8 billion, driven in part by persistent demand for cloud services. That's a 21% jump from one year earlier and was better than Wall Street's forecasts.

The company's guidance for its current quarter was also reassuring.

The takeaway: The S&P 500 is on track for its fourth week of losses in a row. Investors had hoped that earnings would serve as a welcome distraction from the Fed and would catalyze a turnaround. So far, that hasn't really materialized — just because expectations are so high, and anxiety is running deeper.

"We think the more hawkish message from the Fed increases the pressure on corporates to deliver on earnings," BNP Paribas analysts said in a note to clients this week.

Up next: Earnings from another batch of big companies next week, including Facebook's Meta (FB) and Google's Alphabet (GOOGL), could play a big role in solidifying the market mood.

Stocks have slumped this year. So has bitcoin. But gold is holding its ground.

My CNN Business colleague Paul R. La Monica asks: Will the commodity pick up steam? And could it head back towards its all-time high above $2,000 during the early stages of the pandemic?

Some experts think so.

"Gold remains a safe haven and an insurance against geopolitical risks," André Christl, CEO of Heraeus Precious Metals, said in a recent report. "The risk of persistently high inflation is also positive for gold."

Gold is often viewed as a good hedge against rising interest rates and inflation since it should, in theory, hold onto more of its value given that it's a tangible and scarce asset.

The return of market volatility this year, which has hurt meme stocks and bitcoin in particular, could lead to further gains for gold, according to some strategists.

"Cryptos stole all the oxygen out of gold last year, and people go into crypto for many of the same reasons as gold," said Robert Minter, director of ETF investment strategy at Abrdn, noting that bitcoin bulls have argued that it should also be considered a hedge against inflation.

Recent turbulence has poured cold water on that thesis, however.

"Investors are starting to realize bitcoin is more of a risky asset," Minter said. "It's less of a portfolio diversification tool and more of an energy drink."

In early 2021, Robinhood grabbed the spotlight as amateur traders used the trading app to snap up shares of GameStop and AMC Entertainment, sending stocks in the troubled companies soaring.

One year later, Robinhood is struggling to transform its passionate user base into sustainable profits. The company's shares are down 14% in premarket trading after it reported a net loss of $423 million for the final three months of last year. During the same period in 2020, before Robinhood's initial public offering, it posted net income of $13 million.

Investor insight: Robinhood's shares closed Thursday at $11.61, 69% below their IPO price of $38 apiece. The company's stock has been hammered by the recent sell-off in tech companies, which has hit newer and riskier names especially hard.

The company's earnings will do little to restore confidence. Monthly active users rose 48% compared to one year ago, but declined 8% versus the quarter ending in September.

Costs during the fourth quarter jumped 162% from the previous year — though executives said that was mostly due to share-based compensation for employees, and sought to reassure investors that they would manage them better moving forward.

"We expect to grow our costs much more slowly from here on out," CEO Vlad Tenev said on a call with analysts.

Also today: US personal income and spending data, along with the Federal Reserve's preferred measure of inflation, all post at 8:30 a.m. ET.