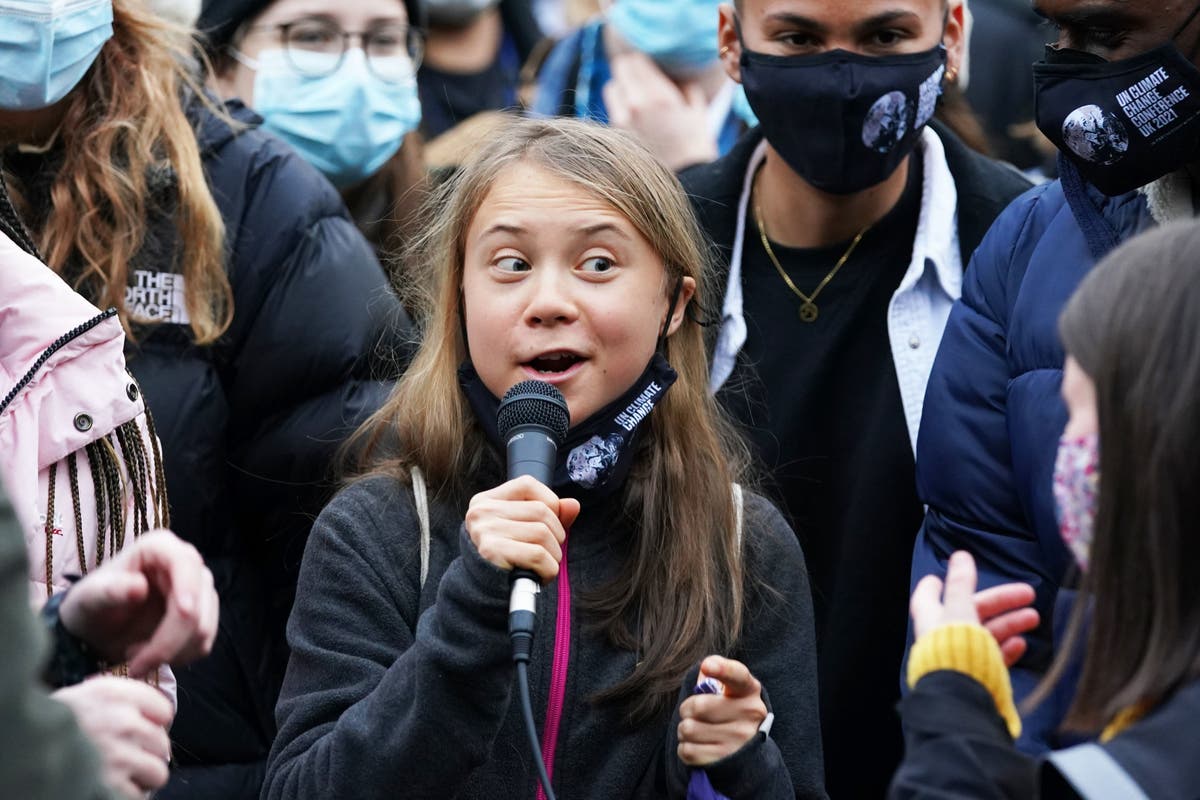 Greta Thunberg told young protesters that politicians attending COP26 are “pretending to take our future seriously” as she attended a protest in Glasgow on the first day of the COP26 summit.

The Swedish climate activist, 18, took part in a rally in Glasgow Festival Park on Monday aftenoon as world leaders gathered at the nearby SEC to discuss measures to tackle climate change.

The gathering attended by Ms Thunberg was one of dozens taking place across the city.

She told fellow activists from Fridays for Future that change “would not come” from politicians at the summit but from individuals showing leadership.

Speaking on Monday in front of fellow campaigners, the public and the media, Greta hit out at the the UN climate change conference, saying the Glasgow conference is just like “previous COPs”.

The crowd clapped and cheered as, speaking through a microphone, she slammed politicians for “pretending to take our future seriously”.

“Change is not going to come from inside there. That is not leadership, this is leadership. This is what leadership looks like.

“We say no more blah blah blah, no more exploitation of people and nature and the planet.

“No more exploitation, no more blah blah blah. No more whatever the f*** they’re doing inside there.

“We are sick and tired of it and we’re going to make the change, whether they like it or not.

“This has been going on for too long, and we’re not going to let them get away anymore - we are not, because who are we?”

The crowd responded: “Fridays for future.”

She then asked the crowd: “What do we want?”

Other protests taking place to coincide with COP26 include Greenpeace’s Rainbow Warrior which is sailing up the Clyde. 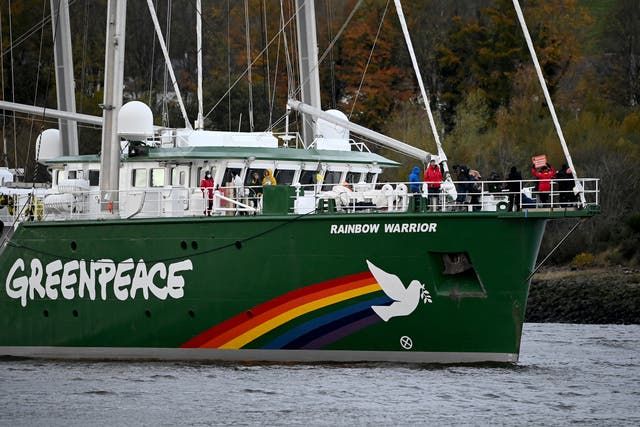 The organisation said on Monday it would sail into heart of Glasgow after officials agreed to allow the ship into the Cop26 restricted zone.

Port authorities wanted to block the famous vessel from entering the area, which bans craft from the stretch of the River Clyde next to the SEC conference centre, but on Monday afternoon the environmental organisation said Police Scotland are looking at ways to facilitate its arrival.

Activists Jakapita Faith Kandanga, 24, Edwin Namakanga, 27, Maria Reyes, 19, and Farzana Faruk Jhumu, 22, who are from communities which would be most affected by a changing climate, are on board the ship.

In a joint statement they said the “authorities understand that our presence at the climate summit is too important to shut out”.

“It’s ridiculous to think that climate talks could be held without the most affected people there and it’s positive that the police and port authorities have changed their minds,” they said.

“World leaders attending the talks could learn a lot from this co-operation. We have been ignored long enough, and now, with a safe passage to Glasgow, our voices must be heard at Cop26.”

Greenpeace said it had been warned by HMS Vigilant, as it approached the Firth of Clyde, that if the Rainbow Warrior continued its voyage it would be in breach of maritime laws and Police Scotland would “act appropriately”.

But the pressure group said that, following a meeting with Hettie Geenen, the ship’s captain, port authorities told her they would help facilitate the four youth climate activists’ arrival. 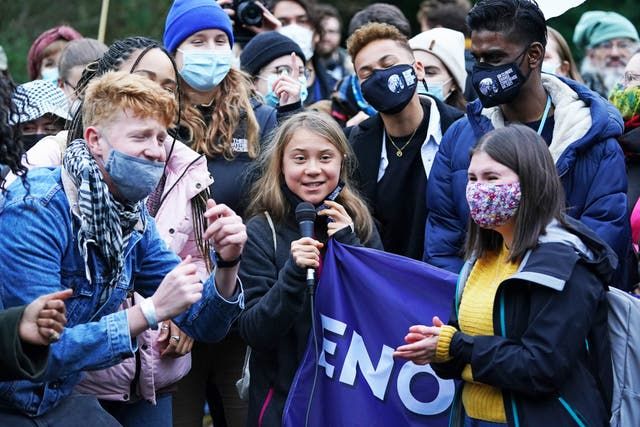 The four campaigners, from Namibia, Uganda, Mexico and Bangladesh, are just a handful of the thousands of protesters who are descending on the city as world leaders discuss how to fight a changing climate.

Over the next two weeks of the conference, 120 dignitaries and heads of state are set to attend the UN event which has been billed as vital in stopping climate change and rising global temperatures.

“We must all halve global emissions in the next nine years but we are heading in the opposite direction. Leaders must not delay a moment longer - every fraction of a degree costs lives,” she warned.

“Developed nations must live up to their promise from 12 years ago to deliver 100 billion dollars (£73 billion) every year to help vulnerable nations adapt to climate change and reduce emissions.

“This support should be in the form of grants - not loans - and half of it should be for adaptation. It is also critical that they agree a way to finance loss and damage for the unavoidable impacts of climate change that are already destroying homes and lives.”

On Sunday, Extinction Rebellion marched through Edinburgh in solidarity with protests taking place across the world.