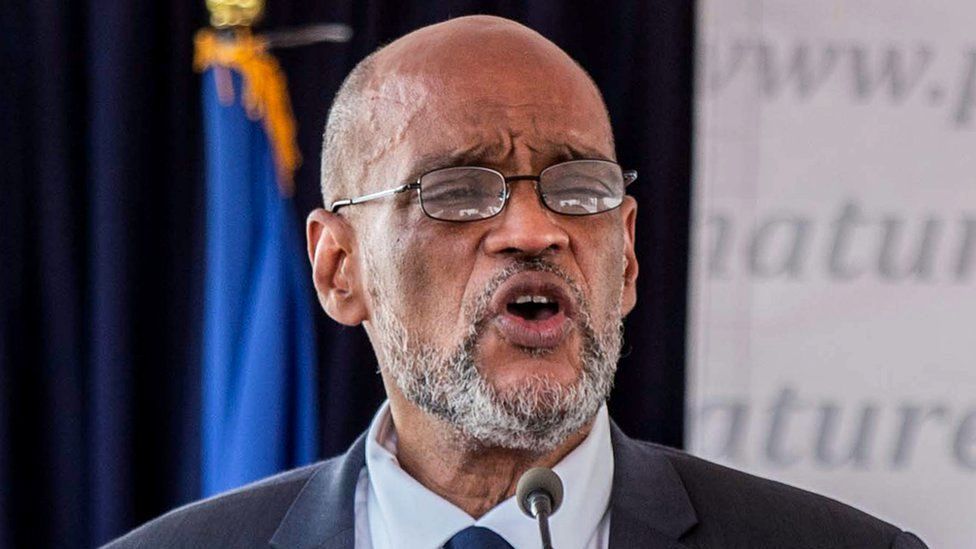 Haiti's Prime Minister Ariel Henry has been banned from leaving the country amid an investigation into his alleged involvement in the assassination of President Jovenel Moïse.

A prosecutor is seeking charges against Mr Henry, who has been asked to explain his links with a key suspect in the killing, Joseph Felix Badio.

Mr Moïse was killed at home on 7 July.

He was shot dead after gunmen stormed his private residence in a suburb of the capital, Port-au-Prince. His death triggered a political crisis which was exacerbated when a huge earthquake struck the south of Haiti a month ago.

Geolocation data also showed that Mr Badio, who disappeared after the murder and is currently being sought by police, was speaking from somewhere close to the scene of the crime. He has not publicly commented on these claims.

In a letter seen by the BBC on Tuesday, Chief Prosecutor Bed-Ford Claude urged the judge investigating the killing to charge Mr Henry over his "suspected" involvement in the case.

No further details were provided and it is not clear what exact charges are being sought against Mr Henry.

The prime minister recently rejected what he called "diversionary tactics" intended to "sow confusion" without responding to the specific accusations against him.

Mr Henry has previously told local media that he knew Mr Badio. He defended him, adding that he did not believe he was involved because he did not have the means.

Mr Henry was given a deadline of Tuesday 14 September to supply the investigation with information.

It comes as authorities step up their efforts to arrest additional suspects in the assassination.

Police say there are now 44 people held in custody in connection with the plot, including 18 retired members of the Colombian military.