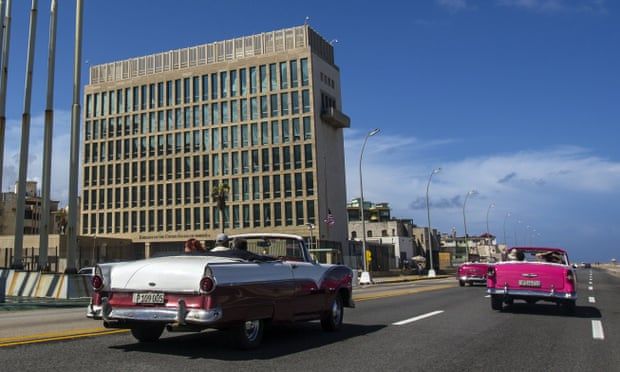 Investigation finds majority of cases probably linked to pre-existing medical conditions, environmental factors or stress
An initial CIA investigation into the mysterious set of symptoms known as Havana syndrome has found that it is unlikely to be the result of a worldwide campaign of attacks by a foreign power against US diplomats and spies.

However, two dozen cases, including some of those originally afflicted in Havana in 2016, could not be explained and would be further studied for evidence of a possible attack, according to a senior CIA official who briefed the US press.

“While we have reached some significant interim findings, we are not done,” the CIA director, Williams Burns, said in a statement. “We will continue the mission to investigate these incidents and provide access to world-class care for those who need it.”

Since the original outbreak of the symptoms, which include hearing strange sounds, dizziness, loss of balance, nausea and memory loss, more than 1,000 cases have been studied around the world.

The interim findings of a CIA investigation have found that the majority of cases could probably be attributed to a pre-existing medical condition, or environmental factors, or stress, the senior official said.

The defence department and an independent panel of experts are conducting their own investigations which have yet to publish reports.

The CIA finding suggests that after the initial cases were reported, hundreds of US embassy and intelligence agency employees started to wonder whether their symptoms could be related. Government agencies asked for anyone who thought they might be affected to file a report.

Marc Polymeropoulos, a former senior CIA official who has suffered severe symptoms since a visit to Moscow in 2017, said the interim findings did not resolve anything.

“They seem to have solved a problem they created with their mass data call – but core cases remain. So [are] we back to square one?” he asked on Twitter.

“This report was neither cleared nor coordinated through the interagency and must stand as the assessment of one agency [CIA] alone.”

The secretary of state, Tony Blinken, said that investigations would continue.

“We are going to continue to do everything we can, with all the resources we can bring to bear, to understand, again, what happened, why, and who might be responsible,” Blinken said at a press conference in Berlin. “And we are leaving no stone unturned.”