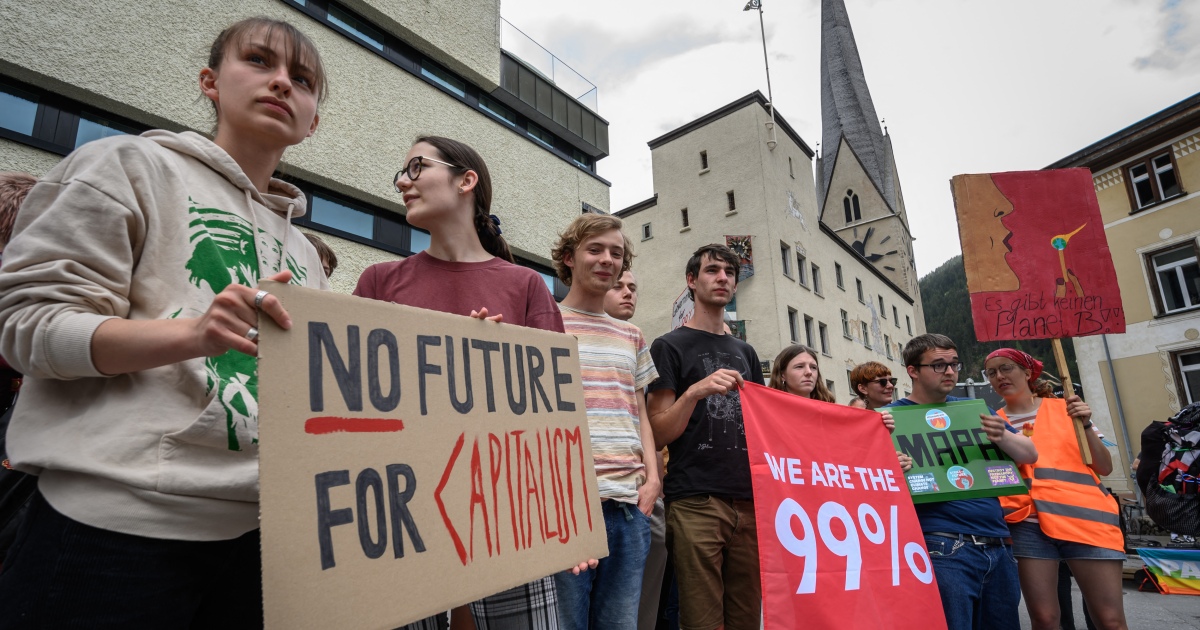 Amid a pandemic and a cost of living crisis, the people have no patience left for the virtue signalling of the Davos set.
Just when you thought you would never see again the spectacle of private jets landing in the Swiss mountain town of Davos for the rich and powerful to unironically discuss “solutions” to climate change and inequality, the World Economic Forum is back.

They’re meeting face to face for the first time since January 2020. Did you miss it? No, me neither.

They meet at a critical juncture in the COVID-19 pandemic, and in the midst of a huge and deepening inequality crisis.

Policy choices made by governments and international institutions throughout the pandemic have fallen woefully short of protecting people from the impact of multiple crises. Spiralling inflation, sky-rocketing energy bills and fuel prices, as well as high and still rising food prices, spelled disaster for so many. But the richest few, who continued to increase their wealth in the past two years, are still benefitting from the crisis. As a result, questions are being raised on the morality of an economic system that has failed to help the masses and instead supercharged inequality during a global health emergency.

It’s somewhat unbelievable that amid all this, finance ministers and multinational CEOs are taking some time out to exchange warm words with fellow “captains of industry” in a Swiss mountain town. But they are – as they have done for 51 years.

People, however, are no longer fooled by the Davos talk of equality, transparency, respect and diversity. They are well aware that those who benefitted and continue to benefit from the pandemic that left them struggling to put food on their table – such as Pfizer CEO Albert Bourla, who made an eye-watering $24.3m in 2021 and is attending Davos – are not interested in the systemic changes needed to tackle inequality.

Indeed, more and more people are questioning what their leaders are doing in unaccountable spaces like Davos when they could be making policy choices that would address pressing problems.

In the UK, where soaring energy bills forced many families to choose between heating their homes and eating, for example, the government is resisting calls for a windfall tax on the profits of oil and gas companies. It is clear that the British public would rather have their leaders tax the companies benefitting from the growing cost of living crisis than waste time discussing inequality and sustainability with CEOs actively deepening that inequality in Switzerland.

Even in a pandemic that demands new thinking and more radical solutions to inequality, leaders around the world are clinging to doggedly neoliberal solutions such as lowering corporate taxation as a solution to domestic economic woes. And this is causing a massive pushback from the people.

In Zambia, for example, President Hakainde Hichilema is finding an increasingly frustrated citizenry asking who benefits from his economic policies, such as his recent move to lower the corporate taxation rate from 35 percent to 30 percent.

Zambians are asking: In a mineral-rich country with huge copper reserves selling at record prices, why are the vast majority of people still living in crushing poverty? Why are we expected to bear the pain of increasing food and fuel prices? Why are the details of an upcoming IMF loan agreement, expected to usher in more devastating austerity, being kept hidden from us?

Rattled by this uptick in debate and questioning of his approach to policymaking, in a recent speech at an EU-Zambia Economic Forum, Hichilema felt the need to reassure Zambians he was not “an agent of imperialism”. In this environment, it is hard to imagine that Zambians would appreciate seeing their delegates discuss policy and investment strategies in a forum bringing together all those benefitting from the riches, and the crises, of their country.

Not because global solutions aren’t needed – they are an important part of the picture. But while many structural solutions to inequality do require global action, the radical changes needed on both the domestic and international fronts are not in the Davos wheelhouse because they threaten elite interests.

The World Economic Forum is not accountable to anyone but itself. Serious tax reform proposals that are gaining momentum, such as a Global Asset Register (the proposal to create a comprehensive international registry of all wealth and assets), or the creation of a UN tax convention, will not find political backing at Davos. A much-needed reform of multilateralism cannot and will not begin in Davos.

People want to see accountability in domestic policy – in tax policy in particular – and this does not require a trip to Switzerland.

Just this week, Amazon’s Jeff Bezos criticised US President Joe Biden on Twitter for suggesting that making the wealthiest cooperations “pay their fair share” could help bring down inflation. It was not hard to see that the billionaire businessman was nervous about the possibility of the next US budget including a new “billionaire’s tax” that would see him pay an extra $35bn in taxes. The possibility of a corporate tax hike, coupled with the news of Amazon’s first-ever unionised warehouse is clearly making Bezos uncomfortable. And he should feel uncomfortable. Times are changing. Billionaires like Bezos are no longer free to wield their power without being challenged.

The media had dubbed 2019 “the year of protest”. In the years that followed, despite the pandemic, the protest has not stopped. After two years of pandemic, skyrocketing prices, rising poverty and deepening inequality, people are beyond a breaking point. And they have no patience left for governments and international institutions that are acting to protect the interests of the richest and the most powerful.

Those attending Davos this year should take notice of this reality.

People will not be looking at Davos for solutions. They already know how their problems can be resolved: by taxing the richest people and corporations, and by ensuring fair wages and employment. And by ending the monopoly the “Davos Set” have over politics and policymaking.

The people have no patience for the speeches or meaningless policy proposals that will be produced in Davos this week. This is why people around the world, from Kenya and South Africa to Switzerland and the UK, will once again be taking to the streets to send a singular message to their leaders at Davos: It is time to #TaxTheRich.
#Joe Biden  #COVID-19  #Pfizer  #Covid