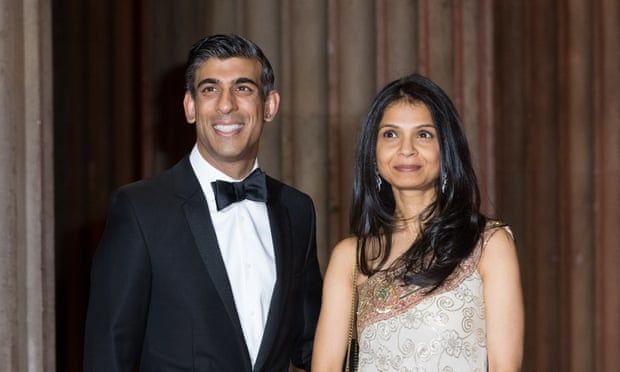 Chancellor obfuscated while imposing steep tax rises on ordinary Britons, says shadow minister
Rishi Sunak and his family potentially avoided paying tens of millions of pounds in taxes through his wife’s “non-dom” status while the chancellor imposed tax rises on the public, Labour has said.

The chancellor’s wife, Akshata Murty, gave in to mounting pressure on Friday, announcing she would pay UK taxes as Sunak’s position began to appear increasingly tenuous.

Murty said she understood that many felt her tax arrangements were not “compatible with [her] husband’s job as chancellor”, adding that she appreciated the “British sense of fairness”. She will pay tax on all future worldwide income and for the last tax year, but not on backdated income.

Louise Haigh, the shadow transport secretary, accused Sunak of failing to be transparent about his family’s financial arrangements while raising taxes for millions during a deepening cost of living crisis. Haigh said that while it was “clear” the arrangement was legal, many Britons would be questioning the ethics involved.

“The chancellor has not been transparent. He has come out on a number of occasions to try and muddy the waters around this and to obfuscate,” she told BBC Radio 4’s Today programme.

“It is clear that was legal. I think the question many people will be asking is whether it was ethical and whether it was right that the chancellor of the exchequer, whilst piling on 15 separate tax rises to the British public, was benefiting from a tax scheme that allowed his household to pay significantly less to the tune of potentially tens of millions of pounds less.”

The Guardian estimates that Murty has potentially avoided about £20m in tax because of her status, for which she currently pays £30,000 a year.

Under non-dom rules, Murty did not legally have to pay tax in the UK on the estimated £11.5m in annual dividends she collects from her stake in Infosys, her billionaire father’s IT business. UK tax residents would be expected to pay about £4.5m in tax on the dividend payment.

In a press conference on Friday, Boris Johnson admitted he had not been told about Murty’s non-dom status. But he denied anyone at No 10 was briefing against the Sunaks, and praised the chancellor for doing an “outstanding job”.

Haigh’s remarks follow calls from Labour and the Lib Dems for an investigation into whether Sunak breached the ministerial code by failing to be transparent. Under pressure, the chancellor on Friday confirmed he had a US green card – meaning he had declared himself a “permanent US resident” for tax purposes for 19 months while he was chancellor and for six years as an MP.

A source confirmed Murty also held a green card. This admission appears to weaken Sunak’s defence of his wife being a non-dom because she one day planned to return to live in India.

Furthermore, despite bowing to pressure to pay UK tax on future income and for the last tax year, Murty will retain her non-dom status. This could in future allow her family to legally avoid paying inheritance tax.

Amid these calls for further scrutiny of the chancellor’s tax arrangements and financial interests, Sunak was defended by Kevin Hollinrake, the Tory MP for Thirsk and Malton in North Yorkshire.

Hollinrake denied allegations of Murty’s non-dom status being a “tax dodge”, arguing that Conservative and Labour governments had both used non-dom status in policy to attract wealthy people to the UK.

Speaking on the Today programme, Hollinrake said: “This is not a tax dodge. It is a deliberate policy to attract wealthy people from other countries around the world to the UK on the basis that they create jobs and create wealth in the UK that benefits everybody.”

The Guardian has learned that just days before Sunak raised national insurance contributions, affecting millions of people, the Treasury introduced a new low-tax scheme that is partly devised to benefit some wealthy non-dom investors.

Hollinrake went on to defend Sunak for continuing to hold a green card and for paying taxes in the US even after he became chancellor, saying that he needed one when he was working there.

He added that Sunak “then came to the UK and declared that position with the Cabinet Office”. “It doesn’t reduce his taxation in the UK at all. In fact with a green card you can often pay more tax,” he said.
#Boris Johnson  #Johnson