The COVID-19 numbers are a sobering reminder of how brutal the pandemic remains for the US health-care system, and could augur trouble ahead for its Northeast states.

The latest US Covid-19 wave is taking its toll on some states' intensive-care units, with several parts of the country seeing outbreaks that are as bad as ever.

In 15 states, patients with confirmed or suspected Covid are taking up more ICU beds than a year earlier, according to Department of Health and Human Services data. Colorado, Minnesota and Michigan have 41 per cent, 37 per cent and 34 per cent of ICU beds occupied by Covid-19 patients, respectively, the data show. 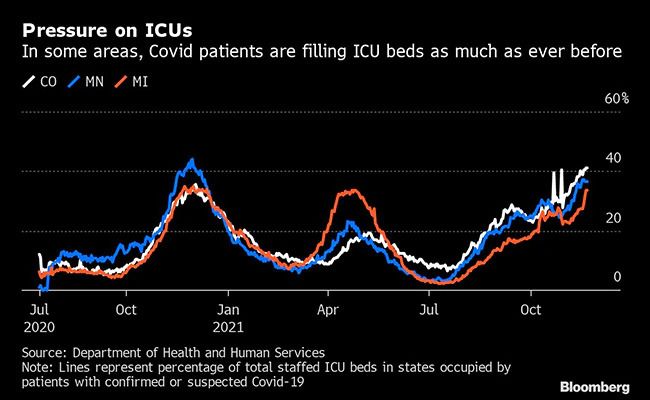 The dramatic uptick means there's proportionately less space in hospitals for those suffering from other potentially deadly ailments.

"Many of our physicians are at a breaking point," said Ali Mokdad, a professor with the University of Washington's Institute for Health Metrics and Evaluation. "It's not easy to be day in and day out in an emergency room, in an ICU, looking at someone who is dying because he or she is not vaccinated."

The numbers are a sobering reminder of how brutal the pandemic remains for the US health-care system, and could augur trouble ahead for Northeast states, where cases began surging a few weeks after the Midwest and Rocky Mountains.

Despite the widespread availability of vaccines, the fast-spreading delta variant has shown a frightening capacity to find the most vulnerable people in society. Meanwhile, most states have returned to a semblance of their pre-pandemic lifestyles.

Michigan, which has the highest per-capita case rate in the nation, is encouraging people to get vaccinated and mask up. The Michigan Department of Health and Human Services issued a mask advisory on November 19. But Governor Gretchen Whitmer does not plan to issue any new restrictions on public gatherings, said spokesman Bobby Leddy.

The surge begs the question of when the US will finally be able to turn the page on the pandemic. A new Covid-19 pill from Pfizer Inc. is bound to help, as will other therapeutics in the pipeline. Speaking at the Bloomberg New Economy Forum last week in Singapore, Microsoft Corp. founder Bill Gates predicted that the combination of vaccine-induced and natural immunity worldwide and the new oral treatments would bring Covid's impact to flu-like levels by mid-2022 -- a remarkable turnaround if he's right.

The US has been reporting more than 1,000 average deaths from Covid every day for more than three months. Increases in fatalities typically follow increases in infections.

In the meantime, it's not clear to what extent any hospital system is safe. Many of the states getting hit now have average vaccination rates -- neither spectacularly high like parts of the Northeast nor especially low like parts of the South. Michigan's 54 per cent full vaccination rate trails the national average of 59 per cent, but Colorado and Minnesota are both doing slightly better than the country as a whole.

In New York, rural areas are seeing positive-test rates of more than 8 per cent, while New York City remains below 2 per cent. State officials have reopened 13 mass vaccination sites and have 200 pop-up sites all over the state to get the vaccines into communities.

"We are heading into a very vulnerable time," New York Governor Kathy Hochul said on Monday at a turkey distribution event. "The good news compared from last year to this year, is that we now have the weapons to fight back."

The vaccines continue to work very well at protecting those who take them, but the societal impact is another matter. Unvaccinated people continue to show a vastly higher rate of hospitalization with Covid-19, according to the latest data from the CDC's Covid-Net surveillance network, which was updated Friday and now includes figures through the end of September. 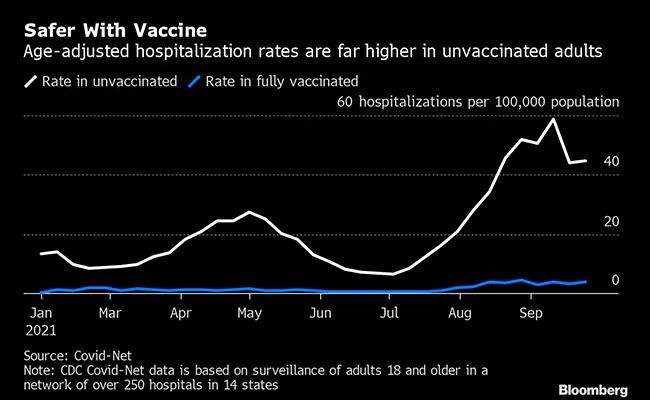 Mokdad said he doesn't project Covid's overall impact on hospitals will near last winter's levels, but he noted that it was a different story in certain hot spots and everyone should be prepared. "No state is safe," he said.

Idaho on Monday ended hospital-care rationing rules -- with the exception of its northern panhandle where anti-vaccine sentiment runs high -- but the system remains stressed. At St. Luke's Health System, one of Idaho's largest providers, 21 per cent of hospitalized adults are Covid-19 patients while 41 per cent of ICU patients are being treated for the virus, according to Jim Souza, chief physician executive. Fortunately, there have been no "deallocation decisions" where care was withheld, Souza said during an online briefing.

In New Hampshire, where the staffing crisis is dire and cases are reaching new peaks, the capacity crunch reached the point that Wentworth-Douglass Hospital in Dover posted a plea on Facebook asking patients to come to the emergency department only for truly acute health crises.

Hospitalizations in New Jersey, meanwhile, have jumped by 15 per cent in the past week, with those in ICUs up 24 per cent, Governor Phil Murphy said Monday at a virus briefing.

"These numbers are being driven overwhelmingly by unvaccinated individuals," Murphy said.