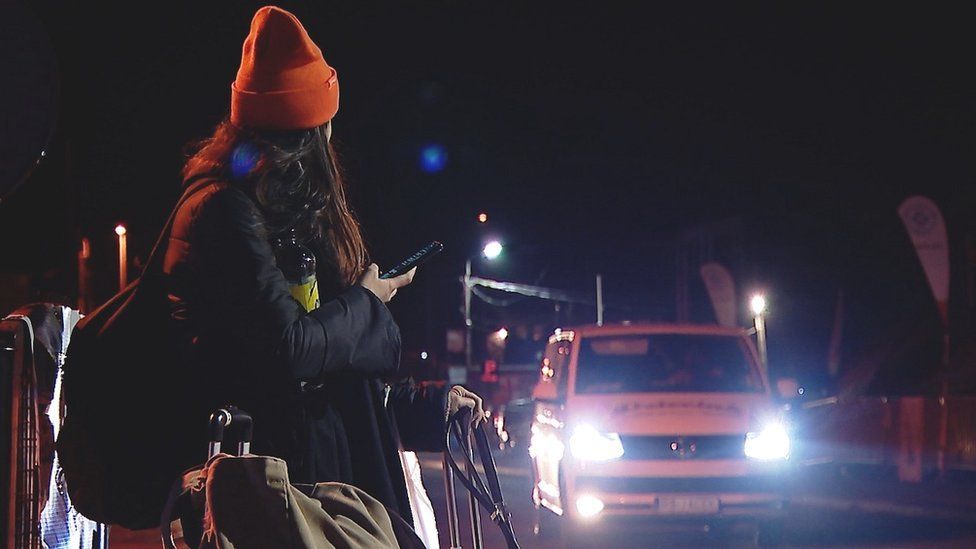 How the sex trade preys on Ukraine's refugees

Five weeks into Russia's brutal invasion of Ukraine, imagine for a moment what it's like to live there now.

Bombs, bloodshed, trauma. No school for your children, no healthcare for your parents, no safe roof over your head in many parts of the country.

Would you try to run? Ten million Ukrainians have, according to the United Nations.

Most seek refuge in other areas of Ukraine, believed to be safer. But more than three and a half million people have fled over the border.

They are mainly women and children, as men under the age of 60 are obliged by the Ukrainian government to stay put and fight.

Displaced and disoriented, often with no idea where to go next, refugees are forced to put their trust in strangers.

The chaos of war is now behind them, but the truth is, they're not entirely safe outside Ukraine either.

"For predators and human traffickers, the war in Ukraine is not a tragedy," UN Secretary General António Guterres warned on Twitter. "It's an opportunity - and women and children are the targets."

Trafficking rings are notoriously active in Ukraine and neighbouring countries in peace time. The fog of war is perfect cover to increase business.

Karolina Wierzbińska, a coordinator at Homo Faber, a human rights organisation based in Lublin, told me children were a huge concern.

Many youngsters were travelling out of Ukraine unaccompanied, she said. Patchy registration processes in Poland and other border regions - especially at the start of the war - meant children disappeared, their current whereabouts unknown.

My colleagues and I headed down to the Polish-Ukrainian border to see for ourselves.

At a train station, well known for refugee arrivals, we found a hive of activity. Dazed-looking women and crying children were all around. 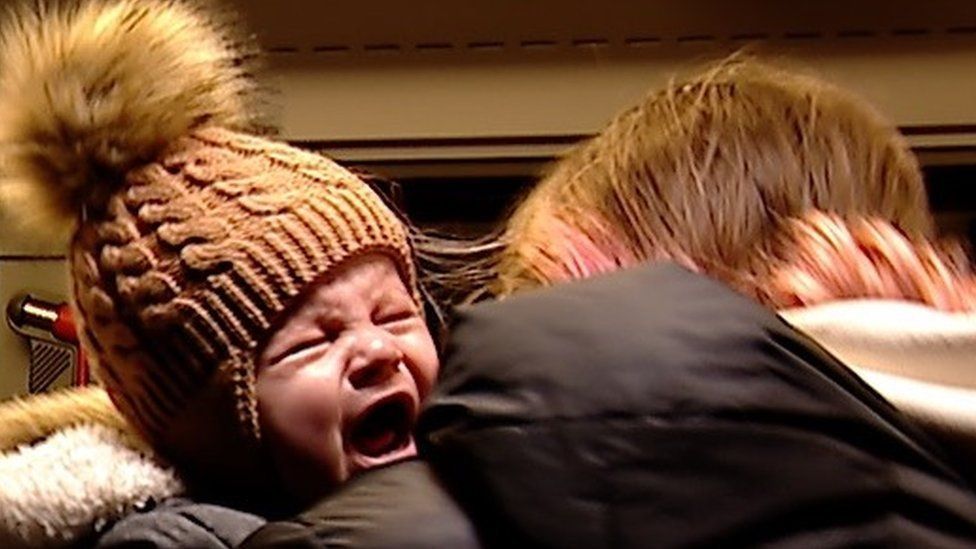 Women and their children have been arriving at the border area

Many were being comforted and offered hot food from steaming industrial-sized cooking pots by an army of volunteers wearing high-vis gilets.

So far, so well organised, right? Not quite.

We met Margherita Husmanov, a Ukrainian refugee from Kyiv in her early 20s. She arrived at the border two weeks ago, but decided to stay on, to help stop fellow refugees falling into the wrong hands.

I asked her if she felt vulnerable. "Yes," she told me. "That's especially why I worry about their safety.

"The women and children come here from a terrible war. They don't speak Polish or English. They don't know what's going on and they believe what anyone tells them.

"Anyone can turn up at this station. The first day I volunteered, we saw three men from Italy. They were looking for beautiful women to sell into the sex trade.

"I called the police and it turned out I was right. It wasn't paranoia. It's horrible." 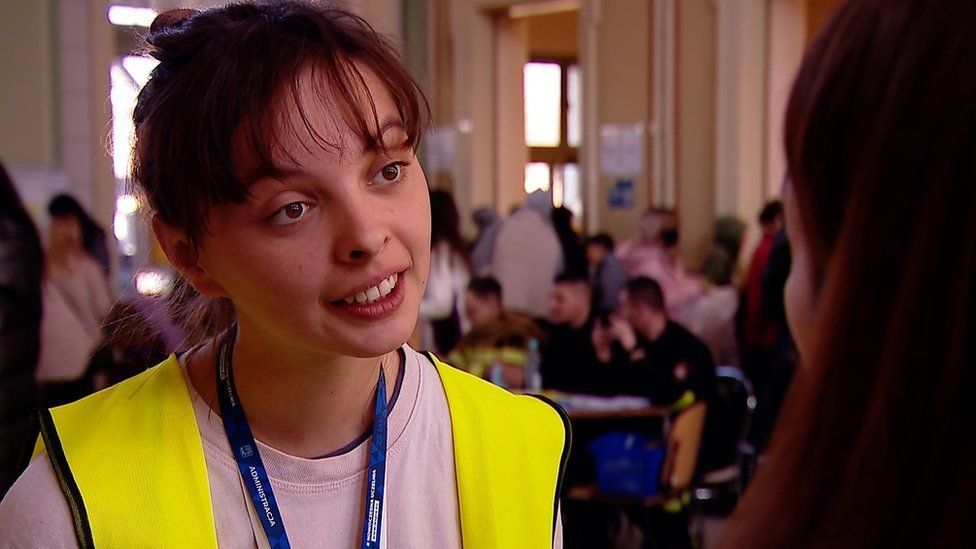 But as we find out from a number of sources, other ill-intentioned individuals are now posing as high-vis-wearing volunteers.

Elena Moskvitina spoke out on Facebook to raise awareness. She's now safely in Denmark, so we chatted at length via Skype. Her experience is chilling.

She and her children crossed into neighbouring Romania from war-torn Ukraine. They were looking for a lift away from the border.

What she described as fake volunteers at a refugee centre asked where she was staying.

They turned up later in the day and aggressively told her Switzerland was the best place to go and that they'd give her a lift there, with a van full of other women.

Elena told me the men looked at her and her daughter "sleazily". Her daughter was petrified.

They asked her to show them her son, who was in another room. They looked him up and down, she said. They then insisted she travel with no-one else except them, and they got angry when she asked to see their ID cards.

To get the men away from her family, Elena promised to meet them when the other women were in their van. But as soon as they left, she told me, she grabbed her children and ran. 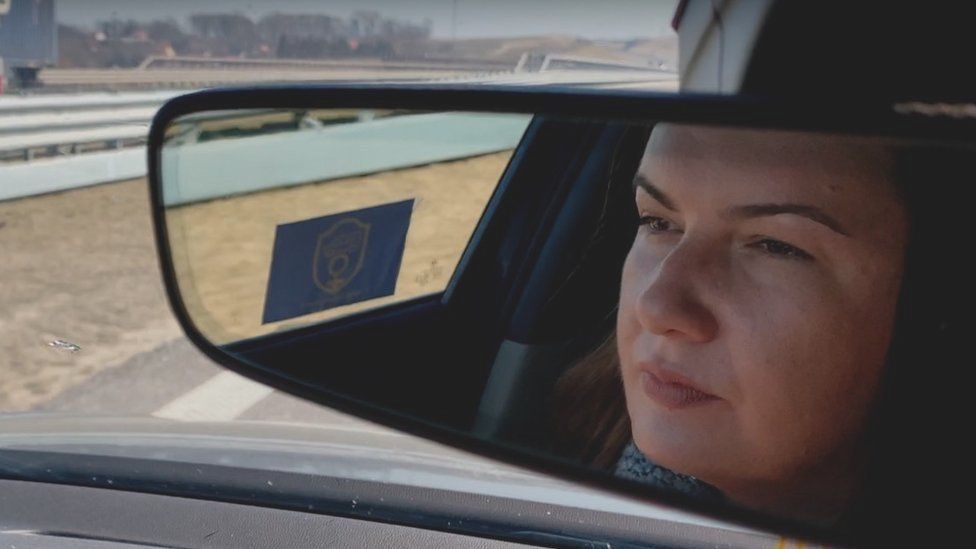 Elżbieta Jarmulska, a feisty Polish entrepreneur, is the founder of the Women Take The Wheel Initiative. Her aim, she says, is to provide Ukrainian refugees with a "bubble of safety".

"Those women have been through so much already, walking or driving their way through a war zone and then they are exposed to fear and exploitation here? I have no words for what that must be like," she says.

By now, she has recruited more than 650 Polish "amazing women", as she describes them, driving backwards and forwards as often as they can to the Polish-Ukrainian border, in order to offer refugees safe passage.

I accompany Elżbieta, better known as Ela, to a refugee centre where she makes a point of showing her ID card and proof of residence to officials, before she asks if anyone wants a lift to Warsaw.

Her car was full in moments. The passengers: refugee Nadia and her three children.

Ela settled the family into her thoughtfully stocked car, offering the small children water, chocolate and motion-sickness tablets if they needed them. 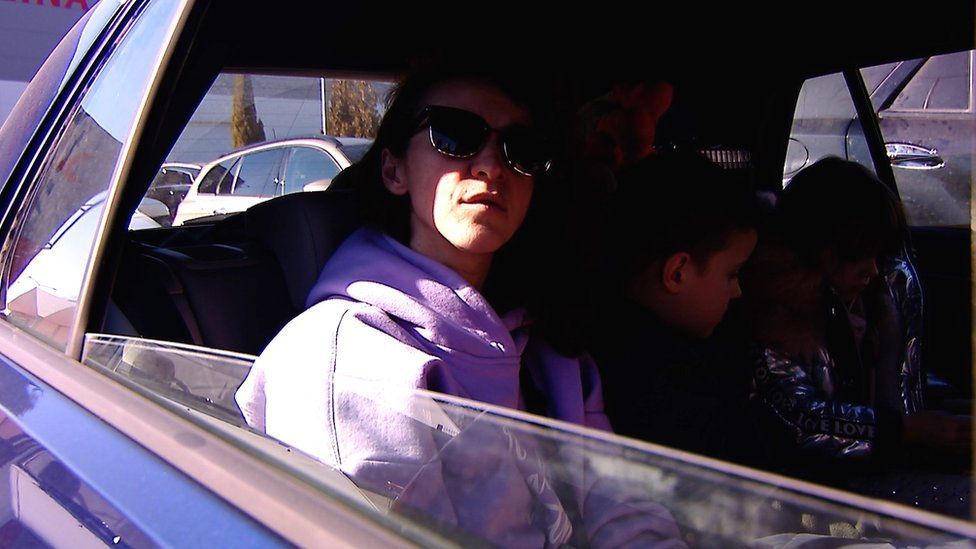 Nadia and her children are grateful for the lift

Nadia, meanwhile, told me of her dangerous journey out of Ukraine from Kharkiv. Now in Poland, she was so relieved, she said, to have a female driver.

She'd heard of the risks of trafficking and exploitation on Ukrainian radio. But she came anyway.

Her home was being shelled, she said. The risks of war were more immediate.

Ela has the refugees' best interests at heart. But leaving the border safely doesn't mean the danger is over for them.

Most we spoke to hoped to go home as soon as the violence ends. But over the next days, weeks, even months, they need somewhere to sleep, to eat, to send their children to school, as well as a job to properly support themselves.

EU leaders have unanimously approved a measure to open up the job market, schools and access to health care for Ukrainians, but as human rights groups point out, refugees need help to get registered and be informed of their rights.

One of the volunteers I met at the Polish-Ukrainian border told me that when you're down and out, friendless and in need of money, you can all too easily end up doing things you would have never imagined.

This woman was lured into prostitution when she was younger. And that, she says, is a large part of the reason she's helping Ukrainian refugees now.

"I want to protect them. To warn them," she told me. She asked me not to reveal her name. She's since turned her life around and doesn't want her children to know about her past. 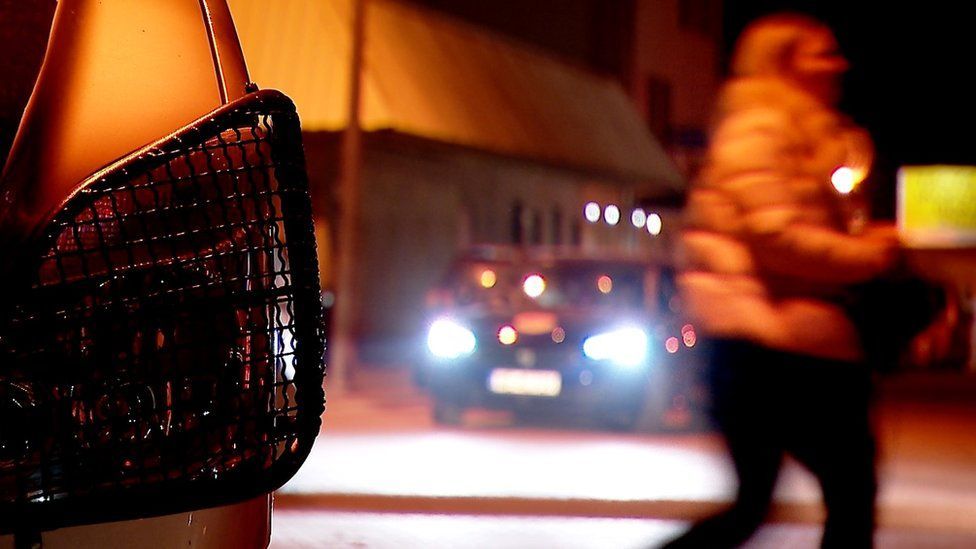 Refugees are all too vulnerable to exploitation

Five weeks into Russia's onslaught in Ukraine, processes across Europe screening those claiming to help Ukrainians are still far from foolproof.

Organised crime (including sex and organ trafficking and frequently, slave labour) is not the only menace. Refugees are exploited by individuals too.

People in Poland, Germany, the UK and elsewhere have opened up their homes to refugees, most with the best of intentions. But sadly not all.

We found a post on social media from a Ukrainian woman who fled to Düsseldorf in Germany. The man who offered her a room confiscated her ID papers and demanded she clean his house for free. He then started to make sexual advances as well. She refused - and he kicked her out on the street.

Irena Dawid-Tomczykkids, chief executive of the Warsaw branch of anti-trafficking NGO La Strada, told me the story was all too familiar. That kind of thing happens, war or no war, she told me. But an avalanche of conflict-scarred women and children bursting out of Ukraine means that exploitation and abuse cases escalate.

She cites teenage refugees as a particular concern. "We all know teenagers, don't we? They're insecure. They want acceptance and recognition," she says.

"And if they are refugees who are far from home and friends, they're even easier to exploit.

"Girls might love attention lavished on them by older men. Or they'll be introduced to a cool girl their own age, who has great clothes and invites them to parties.

"That's how it starts. Don't forget, it's not only men who are pimps, traffickers and abusers." 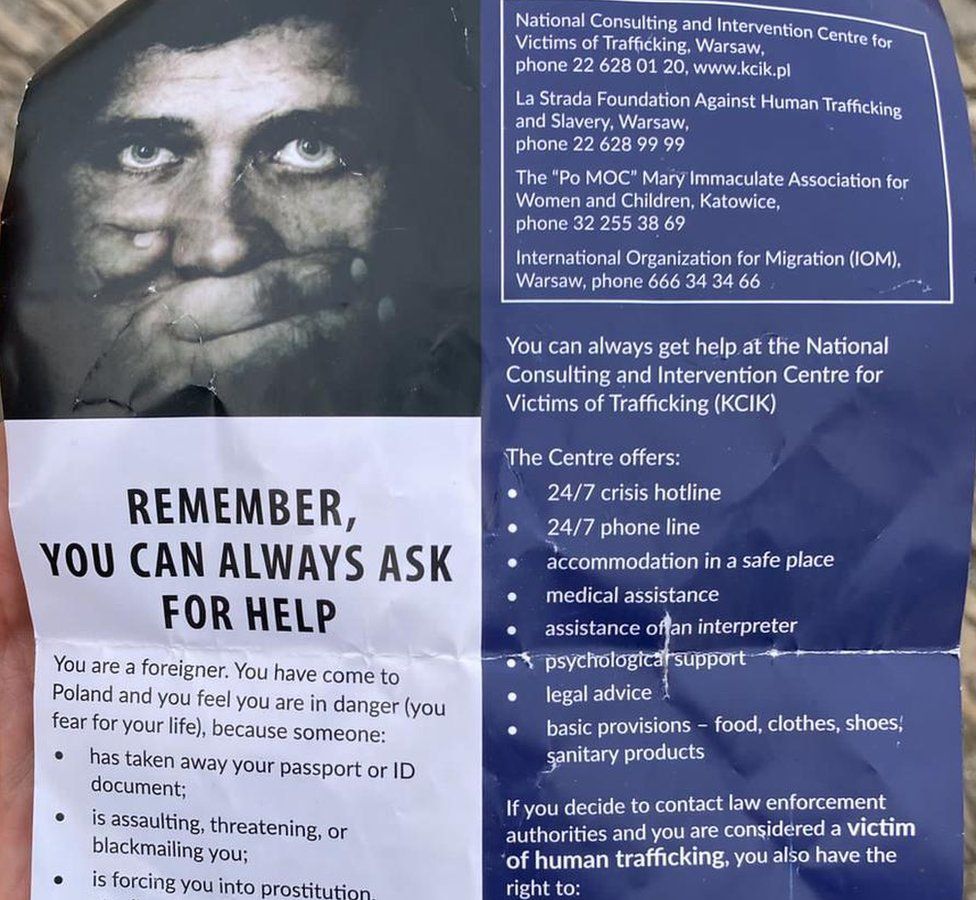 Refugees are given leaflets offering help

Without revealing identities, Irena reels off case after case that La Strada Poland is working on - Ukrainian girls offered plane tickets to Mexico, Turkey, the UAE, without ever having met the men inviting them.

"My colleagues are trying to persuade a 19-year-old girl not to join her friend at a man's house," she says.

"She knows her friend has been beaten. But the man calls her on her mobile, says sweet things and offers her presents.

"If they insist on going, we beg the girls to at least register with the local authorities. If they don't, they have our phone number.

"I hope they can call us if they need us."

Governments across Europe have pledged solidarity with Ukraine.

Human rights groups want them to take better care of those running for their lives. They need protection.