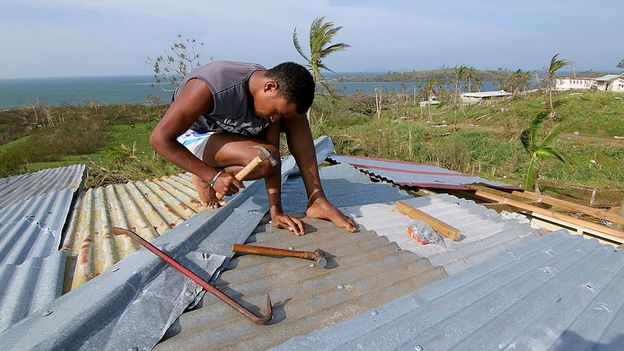 How would $100bn help the world cope with climate change?

The nations that have added the most CO2 to the atmosphere are not the ones where its impacts are most felt. Here's how rich nations have contributed to tackling climate change in poorer nations so far.

On the islands of Fiji, famous for their beaches and crystal lagoons, rural communities are facing water shortages. Over the past decade or so, the country has seen severe droughts driven by El Niño, a pattern of warm currents in the Pacific Ocean that has far-reaching effects on the world's weather. Climate change is making this weather phenomenon more intense, and Fiji's rural communities are among those paying the price.

But even as climate change makes extreme weather such as droughts more frequent and severe, there are ways that Fiji can ensure life is still possible. In one project, 20 communities and 10 schools are having their water systems rehabilitated to adapt to these droughts.

The scheme is funded by New Zealand’s Ministry of Foreign Affairs, and is one of thousands of projects around the world funded by richer nations as part of their pledges to the poorer countries often experiencing the brunt of climate change. The world's rich nations have pledged to provide $100bn (£73bn) a year in climate finance from 2020 onwards to help the developing world both transition to a greener economy and cope with the impacts of climate change that are already here.

Transitioning to a sustainable future comes with a massive price tag, but it isn't always clear who should foot the bill – or how the money should be spent. As many countries struggle with the economic after-effects of almost two years of Covid-19, deciding who bears what financial responsibility has become the multibillion-dollar question for the climate.

The $100bn-a-year pledge was born out of turbulent climate negotiations in Copenhagen in 2009. After an intense round of negotiations, developing nations threatened to walk out on the summit to protest the lack of initiative from the world's richest countries. The $100bn pledge was rich nations' answer, and the deadline of 2020 was set for this sum to be available annually. By mobilising this money, nations who have historically had the greatest carbon emissions – rich, developed nations – showed that they were prepared to help developing nations deal with a problem that was largely not of their creation.

As world leaders and their representatives again meet to negotiate climate action at United Nations talks in Glasgow (COP26), Carbon Cost takes a look at how the developed world is paying for action on climate change so far.

Did rich countries hit the $100bn a year target?

As you can see in the chart below, the short answer is "no".

The year 2019 is the last year for which there is comprehensive data from the Organisation for Economic Co-operation and Development (OECD), which produces an estimate of the total based on rich countries' self-reported estimates. That year, climate finance reached $79.6bn (£58bn), up ever so slightly from $78.9bn (£58.3bn) in 2018. The $100bn figure is not expected to be reached until 2023, although new pledges made at COP26 could help plug the gap somewhat. 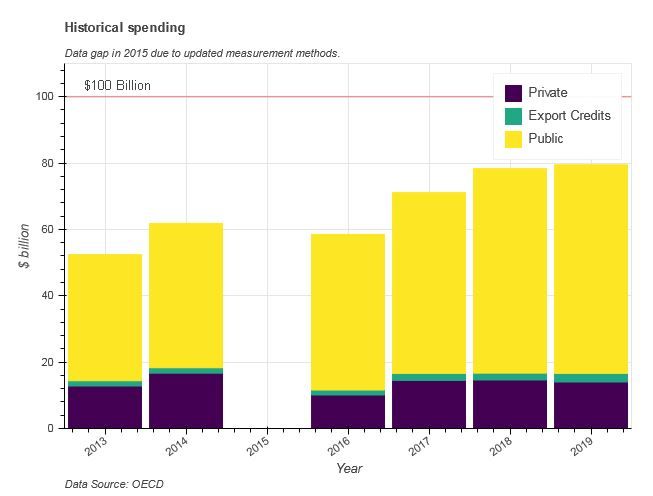 You can see the origins of this money in the chart above. Climate finance comes from a variety of sources, which can largely be split into two categories: public contributions from governments, and private contributions from businesses which are mobilised by this public funding. (Climate export credits are a form of loan that allows a nation to buy climate-related technologies, goods or services from the lender’s country.) As you can see from the chart, the majority of the money came from governments.

Back in 2009 in Copenhagen, there was an expectation that the public money spent would mobilise a considerable amount of extra private finance which would help them reach the $100bn goal. In reality, public sources are almost exclusively responsible for the increase in climate finance between 2013 and 2018.

Are the figures inflated?

Some argue that in reality, there is less money available to developed nations than the figures rich nations report.

In 2013, the Indian Government published a discussion paper warning that the figures submitted by donor countries "were derived on self-reported basis from self-interested players", and open to "gaming" and "exaggeration".

Oxfam, a global anti-poverty NGO, goes further and estimates that the net sum from public sources spent on projects focusing on climate could have been as low as $19-22.5bn (£14-16.5bn) in each of 2017 and 2018, instead of the average $58bn (£42bn) each year reported by the OECD. This figure takes into account, among other things, that more and more of the public climate finance is being provided as loans instead of grants. Out of the $62.9bn (£46bn) in public climate finance mobilised in 2019, only 27% was granted as exactly that – a grant. The rest will have to be paid back, often with interest. (In the chart below, besides loans and grants, the "other" category includes support such as equity and guarantees.)

More of this climate finance being provided as loans means that developing countries will increasingly be stuck with debts to pay for their climate solutions. 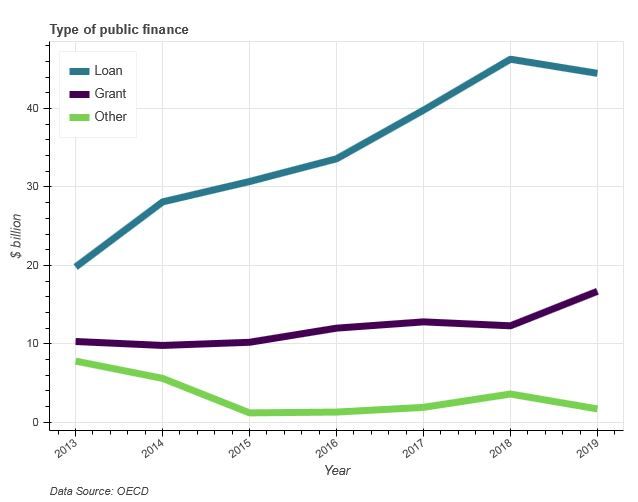 Who is contributing the most?

There are many differences among the rich nations who are providing climate finance. Some are richer than others, and some are greater polluters than others. But who is providing the most money to developing nations?

In the bubble chart below, you can see a number of industrialised countries' greenhouse gas emissions in 2018 (represented by the size of each country's bubble). You can zoom in to see the smaller bubbles using the toolbar on the chart below. 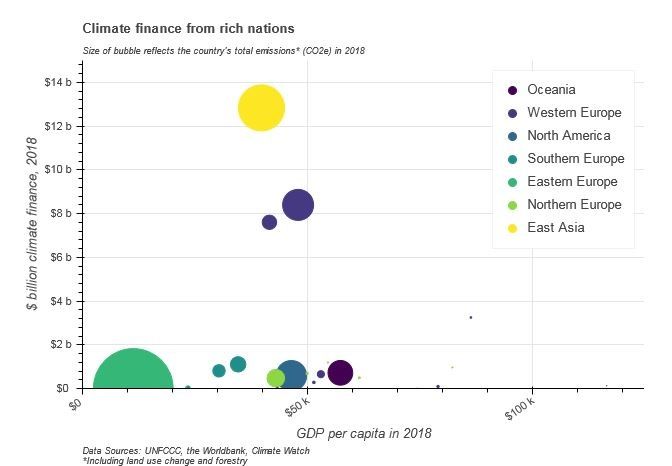 Looking at climate finance through this lens, we can see several things. For example, Japan is a major polluter, but also appears to provide a lot of climate finance. Meanwhile, Russia has the highest greenhouse gas emissions of the countries shown, but contributes less money than Romania, a country with a fraction of Russia's greenhouse gas emissions.

But that's not the whole picture. Japan may be using a broader definition of what can be considered climate finance than many of the other countries reporting to the UNFCC. For example, Japan is mobilising public money for the Matarbari Ultra Super Critical Coal-Fired Power Project III – a coal-fired power plant in Bangladesh – which Japan lists as a climate mitigation project in its biennial report to the UN.

It should be noted that there is a hole in the finances (and the data) since former US president Donald Trump decided to take the US out of the Paris Agreement in 2017. President Biden moved to rejoin the agreement hours after he was sworn in as president, but in 2018 the US's data is conspicuously absent.

Do the poorest nations get the most support?

Some of the most vulnerable nations to climate change are also the poorest. But the majority of climate finance hasn't gone to the lowest income countries.

Much of this climate finance is going to important projects which is genuinely impacting the lives of people in countries vulnerable to climate change. The EU for example, issued €10m (£8m/$12m) to support renewable energy in Nigeria in December 2020, with the aim of providing affordable clean energy and supporting vulnerable communities. The EU also granted $2.8m (£2m) to a project in Yemen to support resilient livelihoods and food security in a region ridden not only by war, but also by droughts and water shortage.

Experts argue we are now facing an important crossroads. The Independent Expert Group on Climate Finance has said that we should think of $100bn as a floor of how much rich nations should provide annually, and not as a ceiling. Covid-19 has also given us the chance to rethink our economies in the wake of the pandemic, it added. "The crisis presents an enormous threat but also a one-off, last-chance opportunity – to restructure economies at the pace and scale that climate science requires by integrating climate action into the economic recovery from Covid-19," the group wrote in its 2020 report. 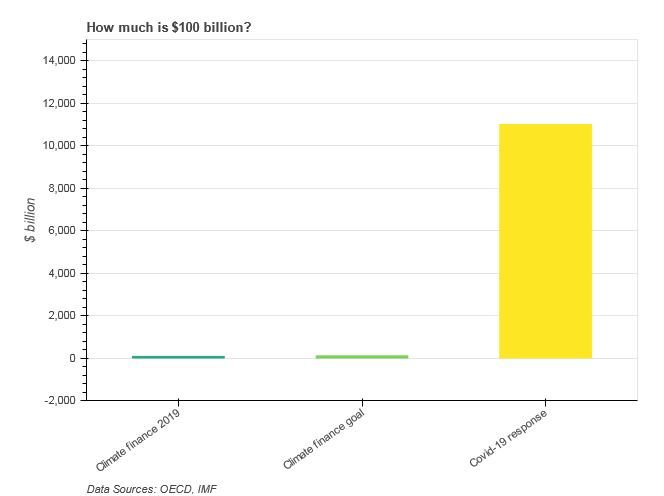 After all, the world's developed nations were able to deploy almost $11 trillion (£8tn) in response to the Covid-19 pandemic. What if the climate crisis saw a similar response?