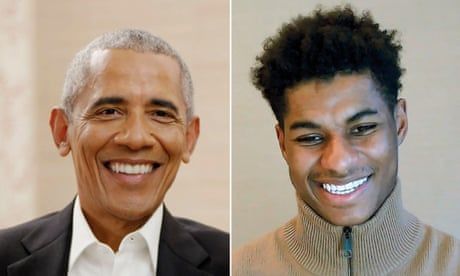 ‘I wanted young people to see my journey’: Obama to Rashford on Zoom

Barack Obama and Marcus Rashford have teamed up to encourage young people to shape their own destinies and the societies in which they live. The former US president and the Manchester United and England forward met in a Zoom meeting arranged by Penguin Books, and posted to YouTube on Friday, to discuss the motivations behind their own activism and their eagerness to inspire others to create change.

“The thing I want young people to see is that even in the highest reaches of power, where I’m sitting with world leaders and we’re trying to design a programme to deal with climate change or end a war or address a major world economic crisis, it’s still just humans,” said Obama. “It’s still just people. So often for many young people, particularly young people who are poor or don’t come from well-connected families or young people of colour or women or people of different sexual orientation, so often we feel like outsiders, not sure we belong at the table in making those decisions.

“But the fact is that the people who are making the decisions, they’re not any smarter than you. They’re not somehow endowed with some special gifts. They may have had opportunities and exposure to things that you didn’t have but you can get those. I wanted young people to see my journey to understand that they belong in those rooms and at those tables where decisions are made as well.”

Obama, 59, said that Rashford is “ahead of where I was at 23”, praising the footballer for being wise enough to ask “how do I give back?” Rashford led a campaign to tackle child poverty in the UK last year, successfully lobbying the government to backtrack on its refusal to provide free school meals to the most vulnerable. Next month he will launch a book club to encourage children to explore through reading.

“I genuinely feel that if you give someone a helping hand at a young age, they’ll go on to do things that even they didn’t believe were achievable,” said Rashford. “For me it’s just setting them in the right direction and allowing them to go and do things bigger than anyone could imagine.”

“Nobody’s destined to be president, nobody is destined to have an impact,” said Obama. “It’s a matter of you taking the risk, taking the chance that maybe you can make a difference.”

“What I tell young people is that whatever chosen profession you have, you still have the capacity to give back and make a difference,” continued Obama. “If you want to be a journalist, there is a journalism that’s designed to titillate and to make people passive and ignorant, or there’s a journalism that focuses people on issues that are important and gives them information and empowers them. If you go into business, you have decisions to make: is your business one that treats workers fairly and is environmentally conscious and does right by the community in which it’s located? Or is it exploitative? If you decide to go into public service, you can do that in government but you can also do it through non-profit organisations.

“It’s the accumulation of people doing positive small things over time that makes us a little bit better with each successive generation.”